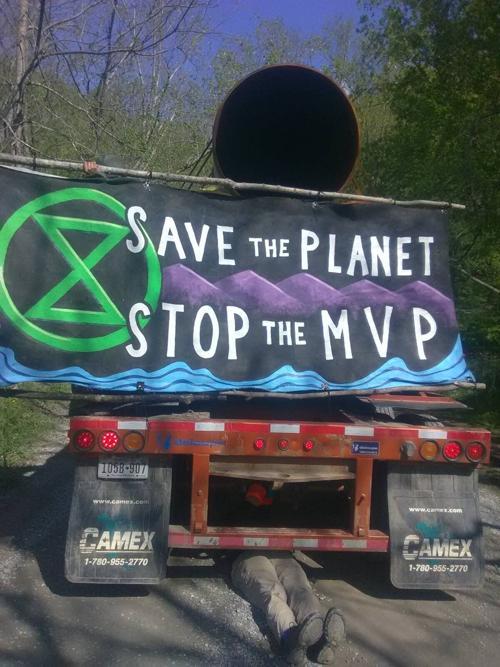 Last November, Thomas Adams was elected to the board of the Skyline Soil and Water Conservation District, which protects the natural resources of the New River Valley.

On Friday, he chained himself to a truck involved with the construction of the Mountain Valley Pipeline, which opponents say is ruining those same natural resources.

Adams, a former hydrologist with the National Weather Service, was arrested after he refused to leave. The 68-year-old Blacksburg resident was charged with abduction, unauthorized use of a vehicle and obstruction of free passage, according to Virginia State Police.

Police were called about 10:30 a.m. to Brickyard Road in the Maybrook area of Giles County, where they saw a crowd of people blocking the road. They also found a man lying beneath a tractor-trailer, attached to its underside with what’s called a sleeping dragon.

Specially trained troopers dismantled the lock-box device and removed Adams, who was then checked by paramedics before being taken to a magistrate.

“Many will ask: why have I chained myself to a truck carrying pipe for the Mountain Valley Pipeline?” Adams said in a statement released by Appalachians Against Pipelines. “I had no choice.”

“I know what looms before us if we continue down the path with our obsessive use of fossil fuels. As a scientist and engineer who has been active in the field of water resources and hydrometeorology in the U.S. and internationally, working on issues related to climate change and global warming, I believe the science,” he said.

In addition to contributing to climate change, opponents say the natural gas pipeline is polluting the scenic landscape of Southwest Virginia.

The statement did not indicate whether Thomas was protesting as an individual or in his capacity as a board member of the soil and water conservation district. A man who answered the phone for the district declined to comment.

In the Nov. 3 general election, Thomas — who has been an opponent of the pipeline for years — won a seat on the board, which is mainly responsible for the distribution of state and federal funds for soil and water conservation programs.

A crowd of 15 to 20 people accompanied Thomas to the protest site, which was about a mile from the Mountain Valley construction area. The crowd dispersed after police threatened to declare an unlawful assembly.

Police later learned that a woman had stopped the truck as it was headed down Brickyard Road, which allowed Thomas to attach himself to the rig, state police said.

Molly E. Graham, 24, of Blacksburg was charged with abduction, obstruction of free passage and the improper stopping of the truck on a public road. Both Adams and Graham were being held without bond in the New River Regional Jail Friday, according to the jail’s online records.

Friday’s event was the latest in a series of protests against Mountain Valley, which is building a 303-mile pipeline that will pass through the New River and Roanoke valleys.

In an attempt to block or delay work on the pipeline, protesters have sat in trees, atop poles and in a junked Ford Pinto placed in the construction right of way. Others have chained themselves to construction equipment and even a Mountain Valley helicopter used for soil and erosion control.

About 60 people have been charged since construction began in 2018.