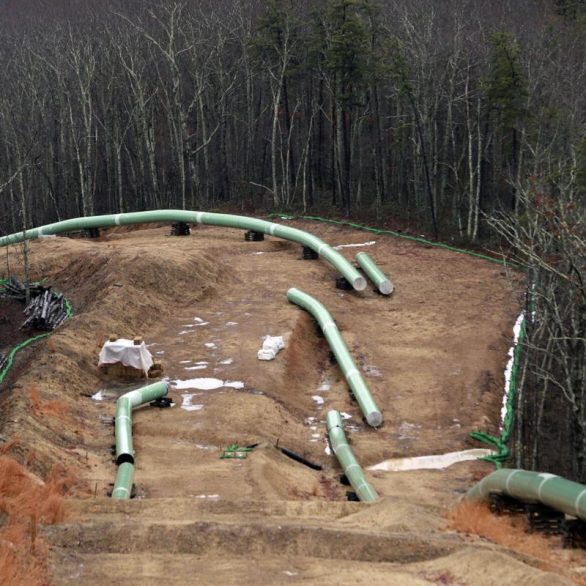 After running into a series of roadblocks this year, Mountain Valley Pipeline has won approval to bore under about 180 streams and wetlands it must cross to complete the natural gas pipeline.

In a unanimous order Friday afternoon, the Federal Energy Regulatory Commission authorized what is essentially one piece of the construction that remains unfinished due to adverse court rulings.

FERC amended its 2017 certificate – perhaps the most important approval among more than a dozen federal and state permits – to allow Mountain Valley to tunnel below some water bodies, rather than digging a trench along their bottoms to bury a 42-inch diameter pipe using what’s called an open-cut process.

Mountain Valley still lacks authorizations from other agencies to ford the remaining streams and wetlands by open cut, and to pass through the Jefferson National Forest. Also unresolved is the project’s impact on endangered species.

“This is another important step forward in MVP’s project completion and, as a critical infrastructure project, is essential for our nation’s energy security, reliability, and ability to transition to a lower-carbon future,” Natalie Cox, a spokeswoman for the joint venture, wrote in an email Saturday.

In its 72-page order Friday, FERC found that boring under water bodies would cause less environmental damage than the open-cut method. The commission had initially approved the method in 2017 for nearly 1,000 crossings, but those plans ran into legal challenges from environmental groups.

Glick and Clements have previously voiced concerns about FERC “putting the cart before the horse” by approving work on the pipeline before the developer had obtained all of its required permits from other agencies.

“Those concerns may be heightened when, as here, the permits and authorizations needed to develop the project have been vacated – several times – by the courts,” the opinion stated.

But this case is different, Glick and Clements concluded, for three reasons.

First, the amendment will actually reduce environmental damage. Second, no additional land would have to be taken by eminent domain for the “almost entirely constructed” pipeline.

And thirdly, they wrote, the 4th U.S. Circuit Court of Appeals struck down a permit for the pipeline to pass through the national forest, in part, because the U.S. Forest Service and the Bureau of Land Management did not first consider FERC’s environmental analysis of boring under streams.

It was appropriate to allow the crossings, the opinion stated, “so that BLM can have the benefit of FERC’s analysis to satisfy the court’s remand.”

One week after it struck down the Forest Service permit in January, the Fourth Circuit invalidated a biological opinion from the U.S. Fish and Wildlife Service, which had determined that two endangered species of fish – the Roanoke logperch and the candy darter – would not be jeopardized by running a large pipeline through their habitat.

That decision, in turn, led the U.S. Army Corps of Engineers to delay its decision on Mountain Valley’s latest application for a set of permits needed for the open-cut stream crossings.

The cascading loss of permits led pipeline opponents to call on FERC to issue a stop-work order for the pipeline.

But no construction, except for erosion and sediment control maintenance, is currently underway. And FERC showed little willingness in its order Friday to revisit its past rulings.

In addressing opponents’ arguments that the project is not needed, FERC stood by its 2017 finding of a public market for the 2 billion cubic feet per day of natural gas the pipeline will transport from northern West Virginia to connect with an existing line near the North Carolina line.

As for concerns about Mountain Valley’s environmental track record, the commission said state regulators in Virginia and West Virginia have already addressed hundreds of violations of erosion control measures, which allowed muddy runoff to be washed from construction sites.

“No additional action by the commission is necessary,” the order stated.

Mountain Valley says it has completed more than half of the 1,000-some water body crossings. Plans now call for crews to bore under the Roanoke River as it flows east of Elliston along the Montgomery-Roanoke county line.

FERC’s order applies to 183 water bodies, which would entail crossings at 120 locations.

The authorization contains a number of conditions, including one that states that boring under the streams cannot start until the Army Corps approves the open-cut process for the remaining water bodies. That permitting process has been slowed by the Fourth Circuit’s striking down of the biological opinion from the Fish and Wildlife Service.

Also last week, FERC defended an October 2020 decision to give the company another two years to complete the project. The Sierra Club and other environmental groups are asking the U.S. Court of Appeals for the District of Columbia to reverse that ruling.

Oral arguments were Thursday. A written decision will likely come in the next month or two.

“The evidence is clear – every setback MVP faces, every permit vacated, and every investor shying away from the project confirms what we have believed since the project’s inception: this unnecessary, fracked gas pipeline has no place in our communities,” the Sierra Club said in a statement.

“It’s time MVP sees the writing on the wall and ends this beleaguered project.”