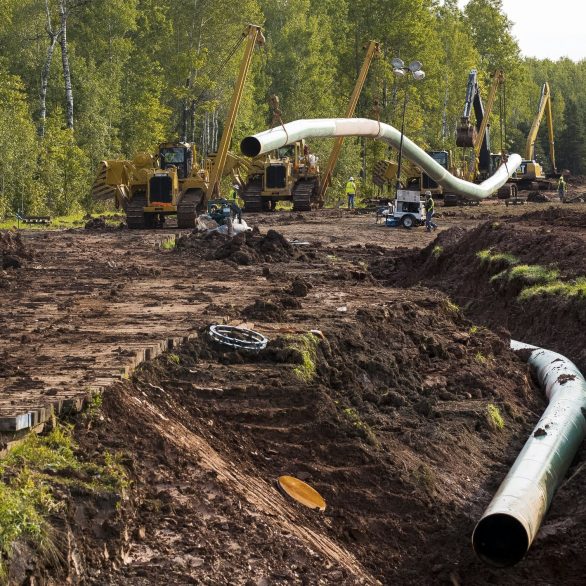 An Oil Pipeline Got Approved Without Controversy In Minnesota? Seems So…

The notion of a noncontroversial new oil pipeline seems quaint these days, yet Minnesota utilities regulators Thursday approved just such a project.

Enbridge got the green light to reroute a 10-mile stretch of its “Line 4” crude oil pipeline through the Fond du Lac Reservation. The Fond du Lac Band of Lake Superior Chippewa requested and supported the project, which would move Line 4 out of the path of natural and historic features on the reservation.

Meanwhile, Enbridge’s plans for its new “Line 3” pipeline remain in suspended animation with some key deadlines coming up within the next two months.

Enbridge operates six oil pipelines in a corridor across northern Minnesota, the primary conduit of Canadian crude into the United States. The Line 4 project approved unanimously by the Minnesota Public Utilities Commission entails a 10-mile replacement pipeline on the outer edges of Enbridge’s corridor.

The pipe to be jettisoned was laid in the 1970s and is currently above ground. The Fond du Lac band is concerned that the aboveground pipe creates a barrier to natural water flow and also impedes band members’ access to medicinal plants and other culturally important resources, according to a PUC filing.

By contrast, Enbridge’s five-year quest to build a new, 330-mile Line 3 across northern Minnesota has been riven with conflict. The Fond du Lac band was one of at least four Ojibwe bands that were vehemently opposed new Line 3, which would run through historical tribal territory though not across any reservations.

New Line 3, expected to cost $2.9 billion, would follow Enbridge’s current pipeline corridor before veering off on a new route. When the PUC approved new Line 3 in June 2018, it ruled that the pipeline would run much closer to the Fond du Lac reservation than originally planned.

So the band and Enbridge made a deal in September that would allow new Line 3 to cross the reservation along the current pipeline corridor. The agreement extended Enbridge’s rights of way on the reservation — for all six of its pipelines — by ten years through 2039.

Enbridge must remove old Line 3 from the reservation and compensate the tribe for the new right of way agreement. Fond du Lac has not revealed the price tag, but it’s likely to be lucrative — possibly in the tens of millions of dollars — given other pipeline rights of way deals between Enbridge and Ojibwe tribes over the past decade or so.

The $100 million Line 4 reroute project is part of the agreement with Fond du Lac, according to Enbridge.

Calgary-based Enbridge says building a new Line 3 is an essential safety project. The current Line 3 is corroding and operating at only 51% capacity due to safety concerns. A new Line 3 would restore Enbridge’s full flow of oil.

Environmental groups and some Ojibwe tribes — though not Fond du Lac — are fighting new Line 3 in the courts, saying it will add to global warming and open a new region of Minnesota’s waters to possible degradation from an oil spill.

Line 3 has been in regulatory limbo since early June when the Minnesota Court of Appeals reversed the PUC’s ruling on the adequacy of the environmental impact statement for the project.

The court ruled that the environmental impact statement, approved by the PUC in March 2018, was “inadequate” because it didn’t address the potential impact of a Line 3 oil spill in the Lake Superior watershed.

The court, acting on appeals from environmental groups and three Ojibwe bands, remanded the environmental study to the PUC. The Minnesota Department of Commerce conducted the study, and the PUC is expected to order the department to fix it.

But the PUC has taken no action since June, apparently waiting on yet another court decision — this one by the Minnesota Supreme Court.

It is expected to rule by September 3 whether to hear a petition by pipeline opponents to overturn parts of the appeals court’s ruling that had affirmed the environmental statement. If the Supreme Court accepts the petition, the Line 3 process could be frozen for at least year, causing lengthy delays for Enbridge’s construction plans.

Even if the Supreme Court rejects the petition, fixing the environmental impact statement could take several months. And that means an important regulatory deadline in late October will almost certainly be missed.

Enbridge still must get several other state and federal permits, including a particularly important one from the Minnesota Pollution Control Agency, or MPCA.

The MPCA says it continues to review Enbridge’s pipeline proposal to ensure that it complies with state water quality laws. But under state law, the MPCA can’t grant Enbridge a permit until the environmental impact statement is finished.

However, under federal law, the MPCA is supposed to decide on the water permit within a year after Enbridge applied for it. The deadline is late October. With no decision at that point, the federal government could essentially waive the MPCA’s authority over the state water permit.

“We will have to take action to maintain our (water permit) authority,” said Melissa Kuskie, manager of the MPCA’s certification, environmental review and rules section. “Right now, we are trying to figure out what mechanism we need to maintain it.”