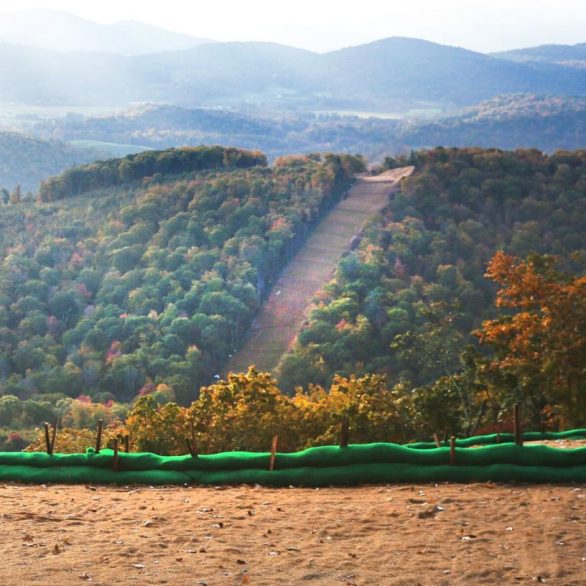 In five words, the 4th U.S. Circuit Court of Appeals ruled on Mountain Valley Pipeline’s request that it draws a new three-judge panel to reconsider permits for the embattled project that have repeatedly been struck down.

In a highly unusual move, the company building a natural gas pipeline through Southwest Virginia asked the Fourth Circuit in May for the random selection of a panel to hear the latest challenge of its permits, made by a coalition of environmental groups and local opponents.

Mountain Valley contended that public confidence in the court is threatened by its continued rejection of government approvals for the 303-mile pipeline, often by the same trio of judges.

“The public has certainly noticed these exceptional results and has zeroed in on the peculiarity that each case involving an authorization for Mountain Valley draws the same three-judge panel,” the motion stated.

The Richmond-based Fourth Circuit, which consists of 15 active judges and three senior judges to hear appeals from five states, has a computer program that randomly assigns three-member panels for incoming cases.

However, the court’s rules allow for the same judges initially appointed at random to remain with a case when it comes up again, under certain circumstances.

That led to their assignment to most, but not all, of the dozen or so future cases in which federal and state permits issued to Mountain Valley were contested.

Supporters of keeping the same judges on similar cases say it improves judicial efficiency, as the panel gains knowledge of past history and familiarity with complex issues.

Lawyers for a coalition headed by the Sierra Club argued that it was the facts of the cases — not the judges who heard them — that led to Mountain Valley’s losing record.

Those facts show “systemic flaws in the permitting of MVP’s pipeline, rather than ‘a deck stacked against it,’” read a brief filed by Appalachian Mountain Advocates and the Southern Environmental Law Center, two groups that represent the petitioners.

Many of the cases decided by the panel involved what it found to be inadequate oversight by government agencies to control muddy runoff from the massive construction project. Mountain Valley has been cited nearly 400 times by Virginia regulators for violating erosion and sedimentation control regulations since work began in 2018.

Officials with the Sierra Club and Appalachian Voices, which are part of the group that is fighting the permits, declined to comment Thursday. A spokeswoman for Mountain Valley also had no comment.

The cases involve the latest challenge of stream crossing permits — one issued by Virginia’s State Water Control Board last December and a similar authorization by West Virginia — where the pipeline starts.

Generally, it is not known which Fourth Circuit judges will hear a case until the day of oral arguments before the court. No date has been scheduled in the stream crossing cases, which will likely not be heard until the court’s September term, at the earliest.

Steve Emmert, an authority on state and federal appeals who has never seen a motion like the one filed by Mountain Valley, said the brevity of the Fourth Circuit’s ruling was not unusual.

Unlike formal opinions in which the court explains its reasoning and cites case law, rulings on motions usually contain little detail, according to Emmert, a Virginia Beach attorney who is not involved in the pipeline litigation.

“I imagine that this is a disheartening ruling for the pipeline, but the court absolutely has the discretion to control its case assignments,” he said.

The remaining crossings of streams, rivers, and wetlands are not the only obstacle Mountain Valley must overcome to meet its target of completing the long-delayed, $6.6 billion infrastructure project by late 2023.

Earlier this year, the Fourth Circuit — again represented by Gregory, Thacker, and Wynn — struck down for the second time two other authorizations: One for the pipeline to pass through the Jefferson National Forest and the second for a finding by the U.S. Fish and Wildlife Service that endangered species would not be jeopardized.

Mountain Valley is applying for renewed permits yet again.

In a filing this week with the Federal Energy Regulatory Commission, the lead agency overseeing the pipeline, the company submitted details on its application to the U.S. Forest Service for approval to pass through public woodlands in Giles and Montgomery counties and Monroe County, West Virginia.

All of the trees have been felled along a 125-foot wide right of way through 3.5 miles of the Jefferson National Forest, according to the documents.

About half of the land along Sinking Creek and Brush Mountain has been cleared and graded, but no pipe has been installed in the forest.

The pipeline will cross under the Appalachian Trail as it traverses Peters Mountain. Plans call for Mountain Valley to bore a tunnel for the pipe about 90 feet below the trail, leaving a buffer of about 300 feet on either side of the scenic footpath.

Critics of the pipeline say its corridor will still be visible from the trail for miles away.