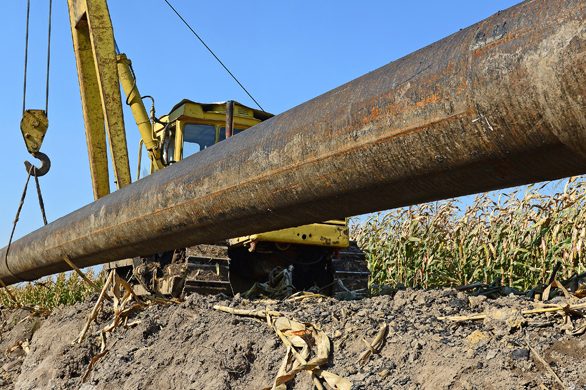 A spokesman for the utility confirmed Friday that “all outstanding issues” surrounding a road-opening permit the company needed to begin installing the line beneath two county highways had been resolved.

“NJNG has addressed all outstanding issues that were presented by Burlington County. We will continue to work closely with them as construction on the project continues into Burlington County in the next several weeks,” New Jersey Natural Gas spokesman Kevin Roberts said Friday.

He did not provide a specific start date for work in the county. A pre-construction meeting with county officials is expected to be held later this week and work may start soon after.

The 30-mile, high-pressure line is planned to run through Ocean, Monmouth and Burlington counties, where it will connect with a new compressor station in Chesterfield.

Work has already been completed in Ocean and Monmouth counties, leaving the Burlington County section as the final work left to complete before the company can put the controversial project into service after years of delays due to regulatory and permitting issues, as well as a still ongoing court fight with environmental groups.

The leaders of those groups blasted the decision to allow the pipeline work to commence here, arguing that it puts residents and the environment at risk.

“The fix was in a long time ago,” said Carleton Montgomery, director of the Pinelands Preservation Alliance. “No matter what people said in public, what they actually did was to advance this completely ridiculous project.”

New Jersey Natural Gas officials say the pipeline will enhance the reliability of its gas delivery to its more than 500,000 customers, mostly in Ocean and Monmouth counties, but also on the Lakehurst side of Joint Base McGuire-Dix-Lakehurst. The base is a critical mobility, training and engineering site and New Jersey’s second-largest employer.

Opponents have argued the planned route for the line is too close to homes and businesses and will pose a significant safety and pollution risk. They also contend the base will receive no direct benefit.

Environmental groups have also condemned the project and sued to try to stop it. They say the infrastructure promotes hydraulic gas drilling, also known as fracking, contributes to climate change and that the line’s route through a portion of the protected Pinelands is a threat to the reserve’s unique and fragile habitat and water resources.

The battle over the project has raged for the last five years and already resulted in significant delays to New Jersey Natural Gas’ original timeline. The utility originally received approval from the New Jersey Board of Public Utilities to build and operate the line back in March 2016 and the Pinelands Commission gave its go-ahead in September 2017, but the towns of Chesterfield and Bordentown Township, plus the environmental groups Pinelands Preservation Alliance and the New Jersey Sierra Club, appealed the decisions to the New Jersey Superior Court’s Appellate Division.

Chesterfield and Bordentown Township settled with the utility last year but both the Sierra Club and Pinelands Preservation Alliance are still carrying on the legal fight.

The Appellate Court has yet to issue a ruling, but New Jersey Natural Gas has pushed forward with constructing the project anyway, assuming the risk that an adverse decision could force it to pay to remove the pipeline if a decision is made after work is finished.

Burlington County was drawn into the controversy because the county’s approval was needed for the company to do the installation work along and beneath county routes 528 and 664. New Jersey Natural Gas then sued the county in 2016 because of its road-opening policy, claiming it was unreasonable and written solely to impede the project. At the time, all five seats on the freeholder board were held by Republicans.

A judge overseeing the litigation instructed the county to work with New Jersey Natural Gas to accommodate the project.

Democrats took control of the county Board of Freeholders last year after voicing opposition to the pipeline. But the Democrats on the board also argued that they could not instruct their engineer to deny permits without cause.

Among the conditions the utility agreed to last year was to pay the county some $12.2 million to compensate for repaving and repair work and other infrastructure improvements related to the project. The utility also agreed to pay a $1.08 million permit fee to the county and create a $1 million replenishable compensation fund to cover damages to property along the county highways.

New Jersey Natural Gas argued the work was legal because they were drilling beneath a bridge and two culverts that are jointly owned by the two counties. But May 7 correspondence to the county from the utility reveal it agreed to voluntarily stop work until negotiations over the final construction details were completed.

Jeff Tittel, director of the New Jersey Sierra Club, said Burlington County’s leaders had the opportunity to block the project rather than allow it to proceed.

“It’s outrageous behavior by the a freeholder board elected to protect the environment and the residents living along the route. Instead of enforcing the violations and shutting them down, they’re giving them the go-ahead,” Tittel said, adding that the board will be forced to own the decision of its engineering office. “When it comes to protecting the people of Burlington County, the freeholders are a bunch of hot air.”

The Sierra Club and other environmental groups have also called for Gov. Phil Murphy to order a stop on all natural gas infrastructure projects currently being built or in planning stages.