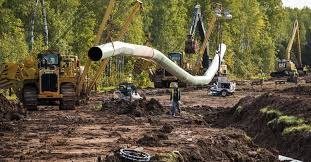 As Enbridge nears it goal of building a controversial $2.6 billion pipeline across northern Minnesota, Canada’s oil industry is imploding.

The U.S. is the largest market for Canadian oil, and Enbridge’s corridor of six pipelines across Minnesota is its primary artery. Enbridge has spent years navigating Minnesota’s regulatory process to build a new pipeline to replace its deteriorating Line 3.

The Canadian oil crisis opens the door for a last-ditch effort by Line 3 opponents to persuade the Minnesota Public Utilities Commission (PUC) to rethink its approval of the $2.6 billion project.

“There is a lot of new evidence and changed circumstances,” said Scott Strand, attorney for Friends of the Headwaters, an environmental group opposing Line 3. “Our case is stronger. (Oil) demand is gone, and it’s not going to snap right back up. There are long-term demand problems.”

Prices for Canadian crude have hit historic lows: Recently, it cost more to ship a barrel of Alberta oil than to buy it. And significant oil-production cutbacks are in the offing, analysts said.

“Canada’s petroleum sector has never faced a greater threat to its existence than it does right now,” said a report from the University of Calgary’s School of Public Policy.

Enbridge does not see any material changes to the information already submitted to the PUC, said Vern Yu, Enbridge’s executive vice president of liquids pipelines.

“This temporary (demand) destruction will be very painful, but once we are through with COVID-19, demand will return to normal,” Yu said.

The global oil industry is stuck in an unprecedented predicament: Demand has plummeted as the spread of COVID-19 has paralyzed economic activity, while a price war between big crude producers Russia and Saudi Arabia has created a supply glut.

Canada is a higher-cost oil producer, and it tends to get particularly slammed in downturns.

“There’s no question that Canada gets hit harder when global oil and gas fundamentals deteriorate, especially over the past month,” said Thomas Liles, an analyst for Rystad Energy. “Even under comparatively ‘normal’ market conditions, a significant portion of Canadian heavy oil production (at least 65%) is subject to higher sales risk.”

Canada’s primary petroleum export is a thick, viscous crude extracted from Alberta’s oil sands or tar sands. It is either strip-mined or blasted with steam through wells that reach into deep underground deposits.

Calgary, Alberta-based Enbridge already has built its new Line 3 from northern Alberta to the U.S. border, as well as short stretches in North Dakota and the final span from the Minnesota border to the company’s terminal in Superior, Wis. All that remains is the 340-mile span across Minnesota.

The PUC reapproved the Line 3 replacement on Feb. 3, after its earlier assent was successfully challenged in court.

Enbridge still needs permits from Minnesota environmental and natural resources regulators, as well as from the U.S. Army Corps of Engineers.

And the PUC process isn’t completed. The commission must still issue a written order based on its February decision, and then opponents have 20 days to petition for reconsideration. The PUC rarely reverses its decisions.

But Friends of the Headwaters and Honor the Earth, an indigenous environmental group that also opposes the pipeline, will argue that fundamental oil economics have shifted over the past two months.

Enbridge has been telling its investors that once its permits are approved, construction of Line 3 will take six to nine months. In the best-case scenario, the project would be in service in late 2020.

However, “that timeline has become more challenging,” Yu said.

Also, even if Enbridge gets the legal OKs to start construction in late spring, COVID-19 could affect the project.

Enbridge has said Line 3 will require more than 4,000 building-trades workers, which would make it one of Minnesota’s largest construction projects in recent history.

Enbridge said the new pipeline is necessary because the 1960s-vintage Line 3 is corroding and for safety reasons operating at only 51% of capacity. A replacement would restore the full flow of oil to 760,000 barrels per day.

New Line 3 also would partly follow a new route. Environmental groups and some Ojibwe tribes said it would thus open new regions of Minnesota’s lakes and rivers to degradation from oil spills, as well as exacerbate climate change.

Canadian oil producers have already committed to cutting output by about 100,000 barrels per day, a number expected to grow to at least 400,000 barrels, said Scott Norlin, a Calgary-based oil analyst with Wood Mackenzie.

And like their U.S. shale counterparts, Canadian producers have already announced billions of dollars in capital-spending cuts. But investment in Canada’s oil industry was falling even before the price crash.

“Canada had already suffered a massive decline in capital spending by the petroleum sector” according to a March report by Richard Masson and Jennifer Winter of the University of Calgary’s School of Public Policy.

Plus, over the past few years, at least six major global oil companies including ConocoPhillips and Royal Dutch Shell, have pulled totally or partly out of Canada due to its cost disadvantages.

Norway’s Equinor also exited, saying it would no longer pursue more carbon-intensive oil projects like those in Canada’s tar sands. Because it takes more energy to extract it, Canadian heavy oil leads to more greenhouse gas emissions than many other types of oil.

The costs of producing and processing Canadian oil are on the high end of the global scale. Then there’s the cost of transporting it. So, Canadian oil trades at a discount, and it’s often steep due to a lack of cross-border pipeline capacity.

The benchmark Canadian crude price — Western Canadian Select — has recently sunk as low as $5 to $9 a barrel (depending on who’s tallying) down from around $40 in early January.

The U.S. yardstick — West Texas Intermediate — hit an 18-year bottom of around $20, down from about $60 three months ago.

Both prices rallied sharply at week’s end over a possible truce between Saudi Arabia and Russia.

Despite the price crash, oil keeps flowing, particularly in Canada where shutting down oil sands operations is technically and economically more difficult than in the U.S.

“There’s a backing up of the system,” said Kevin Birn, a Calgary-based oil analyst for IHS Markit. Oil storage tanks in Canada and the U.S. are rapidly filling.

Three major pipeline projects, including Line 3, have been stalled over environmental and tribal opposition. Enbridge’s Line 3 is anticipated to be the first to come online.

Had the current oil crisis not occurred, Line 3 was expected to be filled up immediately. Oil-market analysts differ on whether that will still be the case, but they said Line 3 is necessary for the Canadian oil industry’s health.

Oil-market forecasting is difficult right now due to the uncertainty of COVID-19.

“The long-term ramifications of what is going on I don’t think are fully understood,” Birn said. But the crisis “will definitely have long term implications for western Canadian producers.”