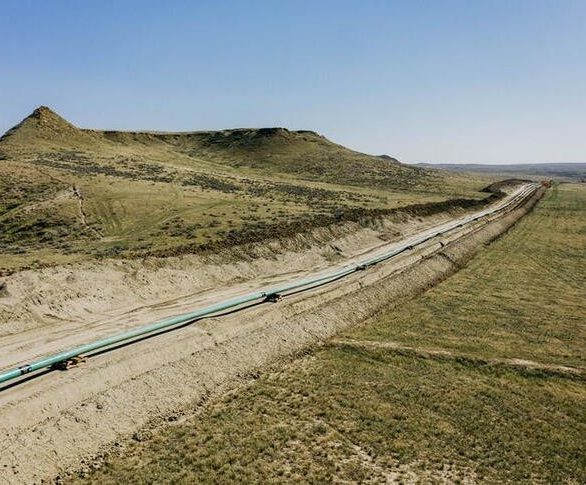 The developer of a Midwest carbon capture pipeline won’t be given early access to an Iowa couple’s private property needed to survey the pipeline’s route, an Iowa judge said Friday.

Despite developer Navigator CO2 Ventures’ concerns that it won’t be able to conduct the surveys until spring should the ground freeze, Judge Roger Sailer said he couldn’t grant a request for a temporary injunction forcing landowners to open up their gates while a lawsuit challenging the developer’s right to enter the land plays out.

Navigator, a partnership between Valero Energy Corp and BlackRock, has proposed a 1,300-mile network of pipelines known as Heartland Greenway that would allow biofuel producers to sequester 15 million metric tons of carbon dioxide each year in an underground storage facility in central Illinois, according to the company.

The judge said further delay to the “highly complex, multi-state, multi-billion dollar project” may hurt the developer’s bottom line and make it more difficult to meet strict deadlines, but that wasn’t enough to force landowners such as William and Vicki Hulse, who are countersuing to challenge the validity of the state law granting pipeline companies permission to enter their lands, to back down.

“The court is dubious that a denial of a temporary injunction would cause ‘irreparable harm,’” Judge Sailer said.

“All Iowa landowners should be thrilled by today’s decision,” said Brian Jorde of Domina Law Group, an attorney representing the homeowners, in a statement Friday.

While the pipeline would traverse states across the Midwest, the bulk of it would be situated in Iowa, where Navigator must offer a detailed route proposal to the Iowa Utilities Board before receiving approvals.

To scope out that path, the company is attempting to use an Iowa statute that allows hazardous liquid pipeline and storage companies to survey and examine private property provided the landowners are given 10 days’ written notice and after an informational meeting is held. The company sued landowners including the Hulses and three others in August, saying they had illegally barred them from entering their properties, which spurred countersuits challenging the statute in September.

The pipeline is one of three carbon pipelines proposed for the state that would facilitate carbon capture and storage, a process touted by industry and some government officials as a necessary tool to help transition toward clean energy but decried by opponents as untested and dangerous.

Navigator didn’t immediately respond to a request for comment.