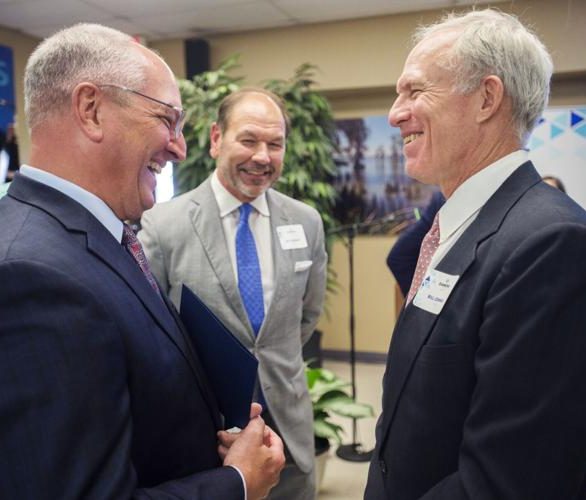 Cleco will invest $900 million into building a carbon capture facility at its central Louisiana energy center that will create over a thousand construction jobs and 30 to 40 permanent jobs while significantly reducing carbon emissions.

Company leaders and elected officials announced the project, known as Project Diamond Vault, on Monday at Cleco’s Brame Energy Center north of Alexandria. Slated to be fully operational in 2028, the project will reduce the carbon emissions at Cleco’s Madison 3 power plant by 95% by capturing it and sequestering it 4,000 feet below in geological formations, company officials said.

Diamond Vault will be one of the first projects in the country to capture the CO2 emissions of a power plant and send them underground. In the electric generation sector, the Madison 3 plant is the “single-biggest emitter of carbon dioxide in the state of Louisiana,” said Bill Conway, Cleco’s chief compliance officer.

According to data from the Environmental Protection Agency, Madison 3 emitted 3.8 short tons in 2021 and 3.7 million in 2020.

The move is important not only for the number of jobs and investment it brings to central Louisiana, which has not been home to a project this large in years, but also because it protects the environment, U.S. Sen. Bill Cassidy said. With its reliance on the energy industry but also home to a vanishing coastline, Louisiana is at the crossroads of the clean energy debate, he said.

“We’re on both sides,” Cassidy said. “We are embracing the future through this project, which is so important for Cleco, but I would argue it’s important for our state, our nation, and the world. In a way, we are going to be creating a model here that will be copied by others that will attract other businesses to move here because they also have to sequester their carbon to export to other markets.”

The project will first require a front-end engineering and design study, which has already begun, and which will cost $12 million, with $9 million coming from a congressional appropriation that will be administered and disbursed by the Louisiana Department of Economic Development.

Once complete, the plant will remove the CO2, compress it, and permanently store it beneath the Brame Center that is capable of storing the remaining emissions plus those generated by other parties, a Cleco official said. Cleco could eventually open it to third-party sources and have emissions delivered by pipeline, Conway said.

Cleco serves 290,000 customers in 24 parishes, including some in Acadiana and central and southeast Louisiana.

“If we are successful with selling clean energy, we’ll be able to reduce the rates of our regular retail customers,” Conway said.

It’s a move for Cleco toward its goal of having net-zero carbon emissions by 2050. Louisiana has a similar goal, dubbed “Race To Zero” by Gov. John Bel Edwards’ office in its campaign last year to reduce greenhouse gas emissions. Louisiana is the only state in the Gulf South region to put forth such a plan.

The state has seen $20 billion invested in clean energy projects since 2017 and seven projects like this just in the past year, he said.

“There is no state in the country and few places on Earth more impacted by climate change than Louisiana,” Edwards said. “The road is long, but I think the direction is clear. This is about economic development as much as it is about climate change. I applaud Cleco’s initiative and challenge other businesses in the state to be aggressive in their response to Louisiana’s climate action plan.”

The Madison 3 plant, a relatively new plant named after former president and CEO Mike Madison who died earlier this month, was selected because of its low sulfur emission rates, its room for construction, easy availability of electricity and steam for the carbon capture process and the geological formations directly below that won’t require the construction of a pipeline, Cleco officials said.

It is fueled by 70% petroleum coke (a waste product of oil refining) and 30% Illinois Basin coal.

The project, Cleco noted, will also be funded by investors receiving federal tax credits and a combination of Department of Energy grants, private equity investment, and its own capital contributions. The company said it does not expect to pass rate increases on to its customers as a result of the project.

That’s a move that should be lauded, said Foster Campbell, longtime Public Service Commissioner member. He criticized Entergy, which paid its shareholders $1.5 billion in dividends and its chief executive received a $4 million pay raise after getting funding from the federal government for storm repairs from 2020 and 2021. It also billed its customers for $3.2 billion in infrastructure repairs.

Cleco, Campbell noted, did not do that.

“I’m the one who grades their papers,” he said. “I try to make them earn every dime they get because they’re a monopoly. I want to praise this company. You got a heart, and you use good common sense when you’re in trouble. I always remember those little folks who are having a hard, hard time paying these bills. That’s the ones we ought to be thinking about.”

“I’m not confident that a project like this is going to be able to sequester carbon dioxide on a time scale needed to avert the worst impacts of climate change,” said Darryl Malek-Wiley, organizing representative for the Sierra Club in Louisiana. “We need to move away from fossil fuels like coal and fracked natural gas and toward clean energy like efficiency, renewable energy, and energy storage.”