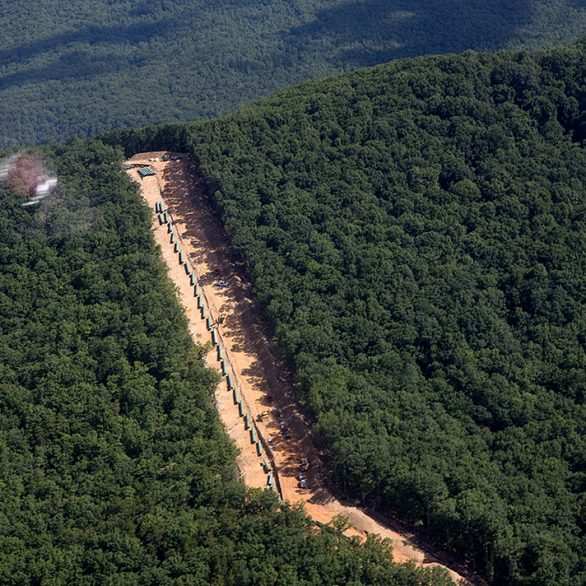 During oral argument, judges of the U.S. Court of Appeals for the District of Columbia Circuit pressed the Federal Energy Regulatory Commission on its two-year extension of the project’s certificate, asking why the agency had not done more to review the “profoundly changed circumstances” of the pipeline’s environmental impact after construction caused additional sediment to settle in waterways along the project’s route.

Both Mountain Valley and FERC blamed abnormally high rainfall in 2018 for the increased sediment.

“When the commission says that this terrible environmental problem was the result of something, does it have an obligation before it makes that statement to do a causal analysis?” asked Judge Patricia Millett.

The D.C. Circuit case is another hurdle for the pipeline developer, which has faced lengthy project delays and a string of legal challenges to its project. Mountain Valley is designed to carry natural gas 304 miles between West Virginia and Virginia.

“Is there a principle that if other entities find significant changed circumstances and they impose their own ways to respond, does that absolve FERC from responding?” asked Millett, an Obama appointee.

Srinivasan, another Obama pick, noted that FERC’s response to the state water quality violations seemed to be that the “system was working” when the states had been the ones to implement stricter requirements to prevent erosion.

Environmental groups led by the Sierra Club are challenging FERC’s decision in 2020 to extend its certificate authorizing project construction until October after Mountain Valley developers had to push back the project’s planned in-service date.

An attorney for the pipeline assured the D.C. Circuit that Mountain Valley’s developers planned to move forward with the project, which he said was 94 percent finished.

“The company is committed to completing the project,” said Jeremy Marwell, a partner at the firm Vinson & Elkins LLP.

In contrast to FERC’s rosy predictions, pipeline construction has resulted in “widespread erosion” that led to some water bodies being buried in mud in violation of state water quality standards, said Benjamin Luckett, an attorney for Appalachian Mountain Advocates, who represented the environmental challengers.

He conceded to Judge Robert Wilkins, another Obama appointee, that Mountain Valley wasn’t actively constructing the pipeline now and was only doing maintenance work.

Luckett also noted that natural gas demand in the southeastern United States had remained flat or declined, which he said should have prompted some new study from FERC about the need for the project when the developer sought the extension.

Millett also appeared skeptical about requiring FERC to review a certificate extension as rigorously as a new certificate.

The judge called it “troubling” that FERC had not responded to a pending stop work order and repeatedly pressed the agency’s attorney on why it hadn’t tried to pinpoint the cause of higher sedimentation after the heavier rain in 2018.

“The rainfall wasn’t a full year, it wasn’t in the times of Noah,” Millett said. “Are you saying the sedimentation happened right after the rainfall? Saying there was a lot of rainfall in 2018 doesn’t seem responsive to me.”

FERC attorney Matthew Estes said the agency did have compliance monitors keeping track of the pipeline.

“That makes it worse,” Millett replied. “If they have all this information coming in, and they can’t connect dots, it doesn’t make sense to me.”

Estes noted that FERC had granted the extension in order to be more protective of the environment and private property that had a partially constructed pipeline running through it.

“The chief effect of recommencing was to allow for restoration,” Estes said.

All parties urged the judges not to dismiss the case as moot, following recent decisions from another federal appeals court that tossed out key approvals for the pipeline.

At minimum, the D.C. Circuit should put the case on hold and order all nonessential maintenance work to stop, but tossing out the FERC certificate would be more protective because it would force Mountain Valley to restore land along the length of the pipeline, said Luckett.

Estes agreed that a stay of the certificate would be more appropriate than finding the case was no longer valid.

But further delays on the project would be very costly for developers, who are already paying $25 million per month on temporary erosion controls along the pipeline route, said Marwell.

Yesterday’s hearing over the FERC certificate extension is the latest in a series of challenges to federal permits for the Mountain Valley project.

To date, the 4th U.S. Circuit Court of Appeals has blocked project approvals from the Forest Service, Bureau of Land Management, and Fish and Wildlife Service. Other litigation is pending over water permits for the pipeline in West Virginia and Virginia.

Mountain Valley critics note that there are several similarities to the lead-up to the 2020 cancellation of the Atlantic Coast pipeline, which also struggled to obtain federal approvals for the project, which extended from West Virginia through Virginia into North Carolina.

But permitting woes are not the only similarities between Mountain Valley and Atlantic Coast, said Caroline Hansley, a senior organizer at the Sierra Club.

The Atlantic Coast pipeline was two years behind schedule before developers Duke Energy Corp. and Dominion Energy Inc. pulled the plug due to ballooning construction costs and long delays in construction (Energywire, July 8, 2020).

The projected costs of the 600-mile Atlantic Coast pipeline had surged from about $4.5 billion in 2014 to roughly $8 billion after years of litigation. Mountain Valley had initially projected it would cost $3.7 billion, noted Hansley, and that estimate has now reached $6.5 billion.

Mountain Valley has repeatedly cited its progress on construction as a reason for the project to move to completion, though critics rebut the pipeline’s status.

Natalie Cox, a Mountain Valley spokesperson, said in an email that the 94 percent completion estimate “takes into account all aspects of the project, such as welding, trenching, pipe laid, tree felling, compressor stations, full remediation, etc.”

In a March note to clients, ClearView Energy Partners LLP noted that there are still a couple of paths forward for the project, including an appeal to the Supreme Court or sending the permitting decisions back to federal agencies for reanalysis.

“We do think that motivated and careful review could put the project on a path to reissued permits, assuming that the agencies receive them back relatively soon,” ClearView said.