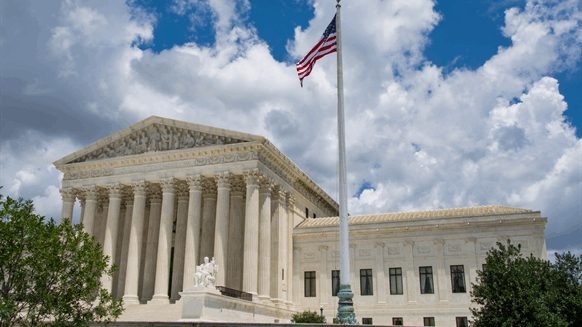 A federal appeals court threw out the permit, saying the U.S. Forest Service lacked the authority to approve the right-of-way. Lawyers for the pipeline and the Trump administration say the lower court ruling threatens the 600-mile (965 kilometer) project’s viability.

Dominion shares rose as much as 2.7%, making it the fourth-best performer on the S&P 500. EQM Midstream Partners climbed as much as 4.8%.

The decision to hear the case is a boost for a project that has been beset by years of delays and cost overruns. The pipeline is one of a series of oil and gas projects that have stalled amid staunch opposition from environmentalists and landowners.

The Supreme Court’s action Friday is a “favorable indicator” that the lower court’s decision was wrong, Brandon Barnes, a senior litigation analyst for Bloomberg Intelligence, said in a research note.

The justices will hear arguments early next year and rule by early July.

The environmental groups challenging the permit, led by the Cowpasture River Preservation Association, urged the Supreme Court not to hear the case, saying the companies were exaggerating the impact of the 4th Circuit ruling.

The groups pointed to statements by Dominion officials expressing confidence they could work around the decision — and proceed with the pipeline — even if the Supreme Court didn’t intervene. Mountain Valley has said it’s exploring a land swap to get around the legal hurdles.

Dominion is developing the pipeline with Duke Energy Corp. and Southern Co. Atlantic Coast would carry as much as 1.5 billion cubic feet of natural gas per day from the Marcellus shale basin in West Virginia to customers in North Carolina and Virginia. The pipeline company says it will save consumers $377 million a year.

Under the original proposal, a 0.1-mile segment would cross under the hiking trail at a depth of more than 600 feet. The exit and entry points wouldn’t be visible from the trail, according to the Trump administration.

The 4th Circuit said the U.S. Mineral Leasing Act doesn’t let the Forest Service authorize that segment. The law excludes land that’s part of the National Park System from the Forest Service’s jurisdiction. The environmental groups say that was the right conclusion.

“Because ACP seeks to cross the trail on an area of federal land in the National Park System, the MLA provides no authority for that right-of-way,” the groups argued.

The Trump administration says that, while the National Park Service manages the Appalachian Trial, the underlying land for the proposed pipeline is part of a national forest — putting it within the Forest Service’s purview. U.S. Solicitor General Noel Francisco told the justices the lower court ruling would upend a long-settled understanding of the Forest Service’s authority.

The ruling “casts doubt on the Forest Service’s previously unquestioned authority to grant permits and other types of land use authorizations for power lines, communications sites, water facilities, and roads that cross the Appalachian Trail within national forests,” the administration argued.

The Appalachian Trail, which runs from Maine to Georgia, was completed in 1937. It’s the world’s longest hiking-only footpath, according to the Appalachian Trail Conservancy, based in Harpers Ferry, West Virginia, which works to protect and maintain the trail.

Atlantic Coast says 56 pipelines already cross the trail, some of them on Forest Service land.

“The Appalachian Trail has never been understood to constitute an impediment to pipeline construction,” Atlantic Coast argued.

But the environmental groups say none of those were authorized under similar circumstances. Some are on state or private land, while others predate the congressional designation of the Appalachian Trail, the groups say.

“In the 51 years since Congress designated the Appalachian Trail, the Forest Service had never granted a new right-of-way to an oil or gas pipeline to cross the trail in a national forest,” the groups argued.