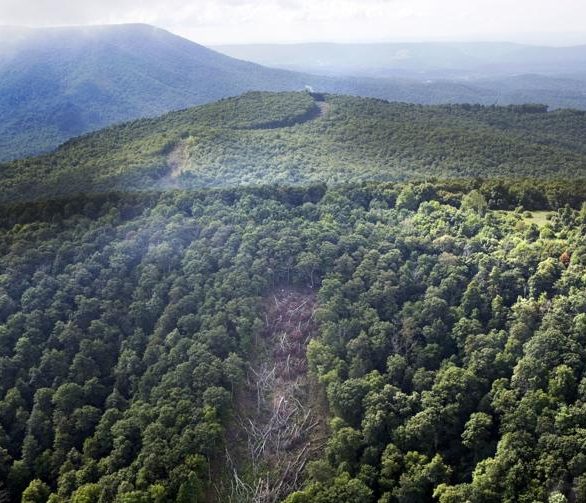 Who owns the Appalachian Trail?

Sometime this fall, the U.S. Supreme Court will have something to say on that, even if only indirectly.

The immediate question is a procedural one: Will the nation’s highest court decide to hear an appeal of the case styled Cowpasture River Preservation Association v. U.S. Forest Service?

Behind that, though, is a practical question that hits home in this part of Virginia — and beyond: Who owns the trail? Here’s why that matters: One possible answer could make it difficult, if not impossible, to build either the Atlantic Coast Pipeline or the Mountain Valley Pipeline.

Do we have your attention now? The case certainly has the attention of those who care about the pipelines, both pro and con.

Sometimes little things matter and here a simple footpath could complicate the desire of those who want to market the natural gas in the Appalachian shale fields.

The American Prospect magazine recently published an excellent summary of the case with the very direct headline: “Can the Appalachian Trail Block a Natural Gas Pipeline?” The Prospect is a left-leaning publication, but the story seems an even-handed account of why this case matters.

Let’s review: While we’re focused on the Mountain Valley Pipeline, we sometimes miss that there are two natural gas pipelines in the works. The other is the Atlantic Coast Pipeline, backed mostly by Dominion Energy. In January 2018, the U.S. Forest Service granted the ACP the permits necessary to cross the Appalachian Trail near the Augusta-Nelson county line. Soon thereafter, the Charlottesville-based Southern Environmental Law Center filed suit against the forest service, contending it didn’t have the power to do so (for reasons we’ll elaborate on below). In December 2018, a three-judge panel of the Fourth Circuit Court of Appeals unanimously ruled in favor of the environmentalists. The ruling, written by Judge Stephanie Thacker, came with a literary flourish: She quoted from “The Lorax,” the children’s book by Dr. Suess: “We trust the United States Forest Service to ‘speak for the trees, for the trees have no tongue.’”

That decision got plenty of attention at the time, but it’s also hard to keep up with the exact status of both these pipelines because there are so many rulings here and permit applications there. The American Prospect does a good job of explaining why this particular ruling is a big deal.

The short version: If the National Park Service owns the Appalachian Trail — which is what the appeals court ruled — then it’s hard to see how any pipelines get built. As writer Noah Sachs puts it: “The lawsuit over this section of the Appalachian Trail could determine the fate of some of the largest natural gas deposits in North America. In a landmark decision last December, the Fourth Circuit Court of Appeals in Richmond axed the project — for now. That court found that the entire Appalachian Trail from Georgia to Maine is part of the national park system, blocking federal agencies from authorizing a pipeline crossing. The astonishing decision upended the U.S. natural gas industry and also jeopardizes other pipeline projects with proposed routes across the trail.”

Or as a Dominion Energy spokesman put it: The ruling creates an “impregnable barrier (from Georgia to Maine) dividing energy sources west of the (Appalachian) Trail from consumers east of the Trail.” Dominion doesn’t think that’s a good thing; others do. Opinions vary, which is why the case is now being appealed to the U.S. Supreme Court.

Legal historians should love this case, because it involves interpretation of statutes more than a century old. A 1920 federal law allows pipelines on “all lands owned by the United States,” except “lands in the National Park System.” Is the Appalachian Trail part of the National Park System? Well, a 1916 law defined the system to include “any area of land and water administered” by the National Park Service. That single word — “administered”— is the key, because in 1968 Congress gave the park service authority over the Appalachian Trail. Curiously, at the same time Congress gave authority over other trails to the Forest Service. Congress must have had a reason for doing this, right? In any case, the Fourth Circuit ruled that since the Appalachia Trail is administered by the park service, then the Forest Service doesn’t have the power to issue permits for a pipeline to cross it any more than you can give someone authority to dig in your neighbor’s back yard. Not your land. If Dominion wants a permit to cross the Appalachian Trail, then it needs to go to Congress — and good luck with that, what with Democrats controlling the House of Representatives.

The counter-argument is that the Appalachian Trail has never been considered a “great green wall” blocking pipelines before. There are already 55 pipelines that cross under the Appalachian Trail. Isn’t this argument that the trail is park service territory a novel legal invention? Perhaps, but here’s a twist: Research by the SELC finds that each of those 55 pipelines crosses under the trail on either state or private land — or was already there when the National Park Service acquired the land. More to the point, that means the ACP would be the first time a pipeline has wanted to burrow under the trail on federal land.

It’s assumed, perhaps incorrectly, that the court’s conservative majority would come down in favor of the pipeline. Ruling that the trail blocked all pipelines might be too much for the current court. However, as Sachs writes, the argument that this is a unique situation “could take some of the heat off this case and make the Fourth Circuit decision appear more reasonable to the Supreme Court.” Perhaps the court might find it amenable to rule that the park service can block pipelines on its own lands, but not privately-owned lands that the trail crosses.

And that’s the curious thing about the trail. It might be part of the park system, but most of its length is on land that the park system doesn’t own. That’s why the Mountain Valley Pipeline this year bought 42 acres of private land that the trail crosses in Giles County and offered it to the  the U.S. Forest Service — in return for a “perpetual easement” under the trail at another spot.

First things first: Will the court decide to hear the case? If it doesn’t, then the lower court ruling stands. That’s likely what the trees are rooting for, had they tongues with which to speak.