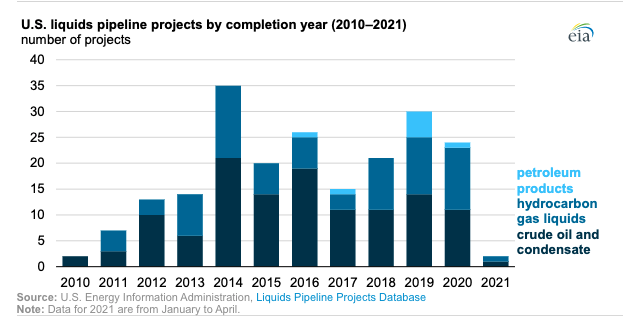 So far in 2021, 2 petroleum liquids pipeline projects have been completed, and 17 more projects have been announced or are currently under construction, according to updated data in the EIA’s Liquids Pipeline Projects Database. That total includes 12 crude oil projects, 6 hydrocarbon gas liquids (HGLs) projects, and 1 petroleum product project. Of the 19 projects, 10 projects are new pipelines, 7 projects are expansions or extensions of existing systems, and 2 projects are conversions of the commodity carried on the pipeline.

EIA’s Liquids Pipeline Projects Database documents more than 250 current, future, and past liquids pipeline projects in the United States. These pipelines carry crude oil, HGLs, and petroleum products—which include gasoline, diesel, jet fuel, and other refinery products. This database includes projects that date back to 2010. Our database contains project types, start dates, capacity, mileage, geographic information, and project status. We track expanded, reversed, converted, and new pipeline projects. Not all pipelines are independent projects. Some projects are connected to each other and carry the same liquid to its final destination. As a result, simply adding together the capacity of all projects would result in overestimating or double-counting the ability to deliver to customers.

The Liquids Pipeline Projects Database complements EIA’s natural gas pipeline projects table. They update their Liquids Pipeline Projects Database based on the best available information from pipeline company websites, trade press reports, and government documents, such as U.S. Department of State permits for border crossings. We release updates to the database twice each year: in the late spring and the fall. The data reflect reported plans. They are not a forecast and do not reflect our assumptions on the likelihood or timing of project completion.