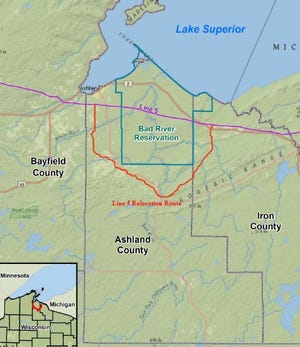 Enbridge Line 5 pipeline reroute would employ as many as 700 union workers during construction, company says

If approved, the reroute of a controversial pipeline owned by a Canadian-based oil company would employ as many as 700 workers from Wisconsin and the surrounding region.

All of those 700 workers would-be union members, a fact that was touted Wednesday as the company, involved businesses and union representatives gathered to sign a project labor agreement at the Steamfitters Local 601 training center in Madison.

Enbridge Energy is rerouting its Line 5 at the request of the Bad River Band of Lake Superior Chippewa. About 12 miles of the active pipeline pass through the Bad River reservation, but easements for the line have begun to expire. The tribe filed a lawsuit in 2019 to have the pipeline removed.

The company has proposed a new 41.2-mile section that would go around the reservation. Construction for the new line would be in Ashland and Iron counties, although the pipeline also crosses Douglas and Bayfield counties.

Leo Golden, the Vice President of major projects for Enbridge, said the company is looking forward to having well-trained union workers on the reroute project, as well as Brownsville-based Michels Corporation.

“It’s critical that the supply of safe, affordable, and reliable energy for all of us keeps operating in the state, as it has been since it was placed into service in 1953,” Golden said. “And we as Enbridge are committed to the safe operation of that line for decades to come.”

Ron Spoerl, the owner of Hawk Industries and a member of the Little River Band of Ottawa Indians, also endorsed the project and shared his excitement at getting to be a part of the construction once Enbridge receives permits.

“As a native, I feel that there’s a lot of opportunities to be a part of the process to help ensure there’s integrity,” he said. “From my perspective, working on his pipelines is again very exciting, because allows me the opportunity to communicate with a lot of tribes, because a lot of tribal people may not understand what energy means to their life.”

The relocated pipeline will cross 186 waterways and requires the conversion of some wetlands, as well as the permanent and temporary fill of other wetlands along the route. Enbridge will need to obtain permits from the DNR for those actions.

The company has not yet received the necessary permits from the DNR in order to start the project.

The 645-mile-long pipeline transports 545,000 barrels a day of light crude oil, light synthetic crude oil, and natural gas liquids from eastern Canada through Wisconsin and Michigan and into western Canada. The products Line 5 carries are used to make transportation fuels, as well as fuel used to heat homes and businesses.

The underground pipe is 30 inches in diameter and has been in operation since 1953. The reroute of the line is expected to cost about $450 million.

The company has met pushback over concerns about oil spills or pipe leaks, as well as the potential impacts to the environment when the company disrupts forests and digs underneath streams and rivers.

The high number of comments both made online during virtual listening sessions and submitted to the DNR caused the agency to delay the due date for public comments, allowing more people to share their thoughts on the project.

Dan Olson, the business manager for Duluth Local 1091 of the Laborers’ International Union of North America, said listening in on the last public session, he heard “some of the dumbest comments.” He said those concerned should know that trained laborers will be building the lines and that they will meet strict standards. He said the DNR should approve Enbridge’s permits without further question so the company can get to work on the reroute.

“I want you to think about the people that if this didn’t go through, that would not have natural gas in the U.P. Think about that, because that’s where this oil is going,” he said. “Think of the thousands of people we will be able to help on top of the 700 people that we’re going to employ.”