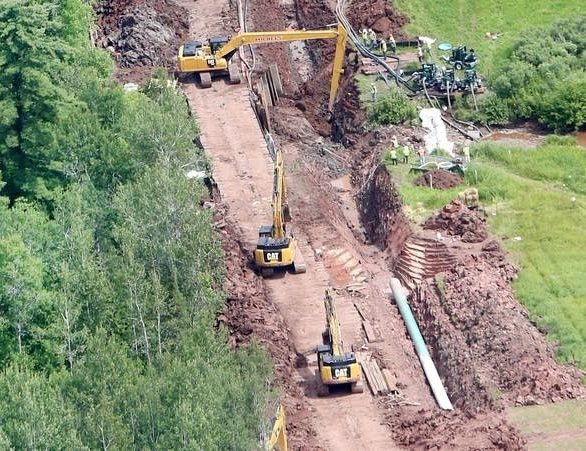 MADISON, Wis. (AP) — Enbridge Energy is seeking permission to conduct land surveys in northern Wisconsin as it considers re-routing a pipeline out of an American Indian reservation.

The company wants to conduct environmental surveys along a 40-mile stretch in Ashland and Iron counties to replace an existing 20-mile segment of Line 5 that runs through the Bad River Band of Lake Superior Chippewa’s reservation, Wisconsin Public Radio reported.

Paul Halverson, an Enbridge contractor and land agent, told the Mellen City Council on Thursday that the company would like to access four parcels of city-owned property. Several area residents who attended the meeting said Enbridge agents had approached them over the last week seeking access to their property.

The council didn’t take any action on the requests but the company got a prickly reception. Peter Turney, of Mellen, said he was worried about Enbridge using eminent domain to acquire land for a potential re-route and impacts to the city’s aquifer. Mayor Joe Barabe said he doubted whether firefighters and emergency medical responders could handle pipeline-related problems.

Jennifer Smith, Enbridge’s community engagement manager for the upper Midwest, told the radio network by phone on Friday that the company wants to reach agreements with landowners and to avoid eminent domain. She said Enbridge only wants access to land for surveys at this point to see which routes may be feasible.

Line 5 carries Canadian crude and propane to eastern Michigan. Members of the Bad River Band of Lake Superior Chippewa sued Enbridge in July in hopes of forcing the company to remove sections of the pipeline that run across their swampy reservation just south of Lake Superior. They argue it’s increasingly likely the 66-year-old line will rupture and cause catastrophic damage.

The Pipeline and Hazardous Materials Safety Administration has recorded 33 spills on Line 5 since 1968.