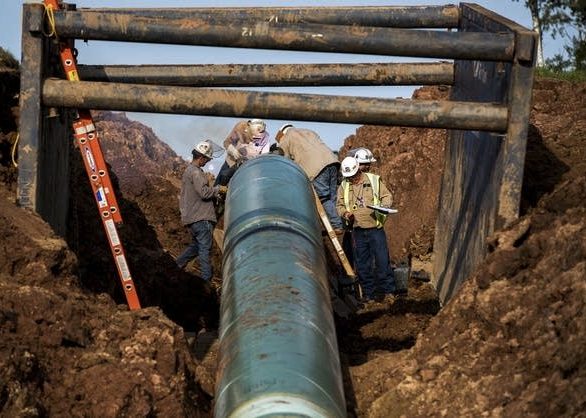 The planned replacement of pipeline segments that run through the state is projected to require a construction workforce of about 4,200. With the agreement now in place, the entirety of that contingent will be backed by unions and around half of it will be made up of local laborers.

Representatives of both the Canadian oil company and the trade unions party to the agreement celebrated its signing on Tuesday with a small ceremony at the Laborers Training Center in Lino Lakes, Minn. Union leaders hailed the deal as a win both for the members they represent as well as for Enbridge itself, saying the company will benefit from the union-trained workforce.

“It’s the right thing to do for the project,” he said.

Replacing the U.S. segments of the Line 3 pipeline — which extends from the city of Edmonton, Alta., Canada, to Superior, Wis. — is expected to cost Enbridge a total of $2.9 billion, according to the company. The 14-mile stretch of the system that runs through Wisconsin was replaced in late 2017 and went online in May of the following year.

In Minnesota and North Dakota, replacement efforts are still in the process of being approved by state regulators. Shamla did not speculate as to when the regulatory process would conclude or when construction will begin in Minnesota, the northern part of which is home to some 380 miles of the pipeline.

Some tribal entities have spoken out against the project out of concern for its potential environmental impact. The pipeline currently cuts across both the Leech Lake and Fond Du Lac reservations and nearby the Red Lake and White Earth reservations. According to Enbridge, the replacement project will involve the construction of a new pipeline outside of Leech Lake but will otherwise follow much the same path.

In response, Enbridge has pledged around $100 million dollars in job training and local business support to tribal citizens and business owners. A company spokesperson said Tuesday that about $25 million has been disbursed so far.

Jason George, the business manager of the International Union of Operating Engineers Local 49, said the unions involved with the project will have a hand in preventing disaster through investments in worker training.

His union and three others entered into the agreement Tuesday: the Laborers International Union of North America, the United Association and the International Brotherhood of Teamsters.

In addition to construction jobs, company officials said that the project will create several thousand positions in support roles such as transportation and logistics. According to Enbridge, approximately $160 million will be spent on the local workforce payroll.