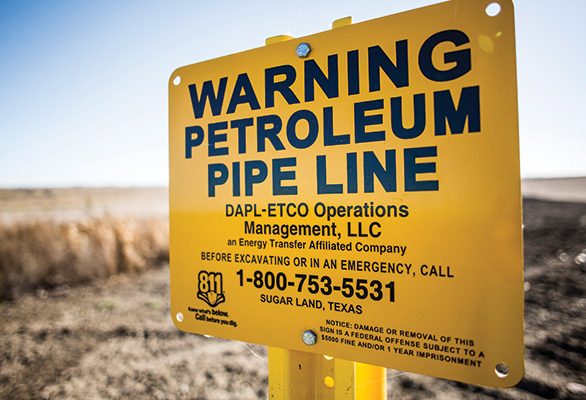 U.S. pipeline company Energy Transfer has taken the rare step of invoking force majeure – normally used in times of war or natural disaster – to prevent oil firms from walking away from a proposed expansion of the controversial Dakota Access pipeline, according to two sources familiar with the matter.

Energy Transfer wants to nearly double the size of the line, and some companies that signed up say it is no longer necessary due to the sharp fall in U.S. oil production after the coronavirus pandemic. North Dakota is one of the costliest spots in the United States to produce crude, and its output has dropped by about one-third from last year, more than most other oil-producing states.

DAPL is the largest pipeline running out of North Dakota’s Bakken shale basin. It has capacity to ship 570,000 barrels per day (bpd) of crude to its endpoint in Illinois. Users say an expansion to 1.1 million bpd is unlikely to be filled because the state’s production is not expected to rebound soon.

“Honestly, DAPL is not needed,” said one customer who committed to space on the expanded line, speaking on condition of anonymity. “They’re trying to build a house that all these people signed up for. Even if there’s no longer a need for the house, you can’t really walk away from it. Would I like to get out? Yes, for sure.”

Energy Transfer, however, has invoked force majeure because it could not get the permits by a certain date, according to one shipper on the line and another familiar with the declaration. That buys the company more time to get regulatory approvals and prevents customers from walking away from their commitments.

The company declined to comment on the force majeure, but reiterated the value of the expansion in a statement to Pipeline & Gas Journal:

“The Dakota Access Pipeline is one of our country’s most important energy infrastructure projects in the last five years and the only direct pipeline to Patoka for Bakken light sweet crude oil. It has and continues to provide the most cost efficient means of moving Bakken crude oil directly and safely to market which boosts drilling economics and supports jobs. Our successful open season proved there is long-term interest from our shippers.”

In an April filing with Illinois regulators, Energy Transfer said that “not one shipper has sought to withdraw from an existing agreement” despite the oil downturn and that demand exceeds DAPL’s current capacity. The company said in legal filings that the downturn is temporary.

North Dakota’s production has dropped by 450,000 bpd, down from a peak of nearly 1.5 million bpd reached last year, according to the Energy Information Administration’s data.

The expanded line is currently expected to enter service in late 2021.

At least a half-dozen U.S. oil pipeline projects have been put on hold indefinitely so far this year, according to U.S. Energy Department data. U.S. production has dropped from a record 12.9 million bpd in late 2019 to roughly 11 million bpd.

DAPL drew thousands of people to North Dakota in 2016 in support of Native American tribes and environmental groups protesting the line’s initial construction. It eventually started in mid-2017 after months of delays.

The first three have said yes, but environmental groups brought numerous legal challenges in Illinois starting a year ago. They argued the application was improperly filed and that an expansion increases the risk of large-scale leaks. The challenges may force the company to resubmit its application.

“They’re in force majeure right now because they did not get the permits,” one source with direct knowledge of the matter said.

An administrative law judge in Illinois could issue findings on the legal dispute as early as this month, though there is no timeline for that report. Once those findings are released, and both Energy Transfer and the opposition respond, the Illinois Commerce Commission will vote on whether the expansion can go forward. That vote has not been scheduled.

Even if producers wanted to fight Energy Transfer’s declaration of force majeure, they may be hesitant to initiate legal action due to the time and cost involved, said Ted Borrego, who has practiced oil and gas law for over 45 years and teaches at the University of Houston Law Center.

“Rarely will you see a shipper trying to bail out of a contract,” he said.

DAPL customers such as Hess Corp and refiner Marathon Petroleum, which invested in the original DAPL project, declined to comment specifically on any contractual agreements on DAPL or on the proposed expansion. Continental Resources, another large Bakken producer, did not respond to requests for comment.

“Hess believes that DAPL has and will continue to be a critical piece of U.S. energy infrastructure, which allows for transportation of crude oil into expanded domestic markets in the U.S. and abroad,” company spokesman Rob Young said.

Bakken crude producers generally break even on drilling at a price of about $46.50 a barrel, according to Deutsche Bank analysts, higher than other parts of the country. The U.S. crude oil benchmark is trading just below $40, after averaging just $17.50 in April and $33.70 in May.

While output in North Dakota has rebounded somewhat from its fall in May to less than 1 million bpd, production is expected to remain lower than its peak.

“At the moment I don’t think the demand is there from shippers for more DAPL, given the decline in Bakken output,” said Sandy Fielden, director of oil and products research at Morningstar in Austin, Texas.