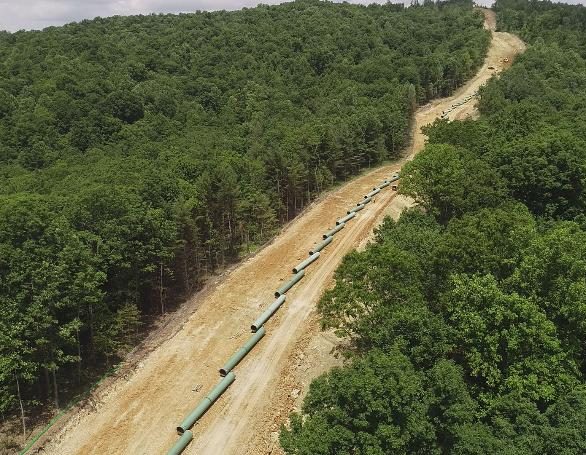 On Aug. 15, three days after the challenge was filed in the 4th U.S. Circuit Court of Appeals, Mountain Valley told federal regulators it was voluntarily suspending work on parts of the buried pipeline.

But construction has continued in the watershed of the endangered Roanoke logperch, and could imperil the Indiana and northern long-eared bats, the Sierra Club said in its motion for a stay.

“MVP construction will cause imminent, significant, and permanent harm to threatened and endangered species,” the motion states.

A stay from the 4th Circuit could halt all work on the project, pending review of the legal claim. Mountain Valley’s voluntary suspension appeared to cover about a third of the pipeline’s path through West Virginia and Southwest Virginia.

Mountain Valley and the Fish and Wildlife Service oppose a stay and are expected to file written arguments in the coming days.

Natalie Cox, a spokeswoman for the company, said it had suggested an “open discussion” with the environmental groups about their concerns.

“It is unfortunate that the Sierra Club has pursued additional court action without having a thorough and more current understanding of MVP’s perspective and plan,” Cox wrote in an email Thursday.

Mountain Valley has said it was discussing the pipeline’s impact on endangered species with the Fish and Wildlife Service and the Federal Energy Regulatory Commission before the legal challenge was filed.

However, the request for a stay details several examples of construction, seen since the voluntary suspension was announced last week, that it says go beyond Mountain Valley’s self-imposed rule that it would only “stabilize and restore” areas where endangered species live.

“This conveniently includes continued construction and installation of the pipeline under the guise of ‘stabilization,’ ” the motion states.

And Mountain Valley’s promise to avoid construction in areas identified by the Fish and Wildlife Service’s biological opinion two years ago ignores the flaws in the plan that are subject to the current legal action, the Sierra Club argues.

The lengthy document fails to take into account construction in areas upland of the Roanoke logperch’s streams and rivers in evaluating how the small fish would be threatened, the motion states and fails to provide firm numbers of how many bats could be harmed under the incidental take statement.

“A recent decision by this court leaves no room for doubt,” the Sierra Club attorneys wrote, referring to an opinion by the 4th Circuit that invalidated a biological opinion by the Fish and Wildlife Service for the Atlantic Coast Pipeline.

In that case, the appellate court wrote that “in fast-tracking its decisions, the agency appears to have lost sight of its mandate … to protect and conserve endangered and threatened species and their habitats.”

The 4th Circuit has already found fault with two other sets of permits for Mountain Valley issued by federal agencies, one for the pipeline to pass through the Jefferson National Forest, and another for it to cross more than 1,000 streams and wetlands.

In the most recent case, the Sierra Club is taking the lead in a case joined by six other environmental groups: Wild Virginia, Appalachian Voices, Preserve Bent Mountain, Defenders of Wildlife, the Chesapeake Climate Action Network and the Center for Biological Diversity.

Mountain Valley says it hopes to regain its earlier-suspended permits in time to complete the $5 billion project by mid-2020. However, the risk of losing its approval from the Fish and Wildlife Service has given new hope to opponents of the controversial project.

“As a professional biologist, I am appalled at what’s happening to our river,” Rupert Cutler of Roanoke, who previously served as the U.S. Department of Agriculture’s assistant secretary for natural resources and environment, said at a news conference organized by opponents earlier this week.

“We’re talking here about the survival of the ecological pride of the Roanoke River Basin, the Roanoke logperch,” Cutler said.

Large amounts of sediment washed from construction sites have been a major problem for Mountain Valley since construction began last year. The sediment can smother the eggs of the logperch and the insects they feed on.

The Virginia Department of Environmental Quality has accused Mountain Valley in a lawsuit of violating erosion and sediment control regulations more than 300 times. On Aug. 2, the agency issued a stop-work order for a two-mile stretch of the pipeline in Montgomery County.

DEQ lifted the order Aug. 16, after Mountain Valley corrected the problems. By then, that area and a much larger length of the pipeline though Southwest Virginia were covered by the company’s voluntary suspension of work.