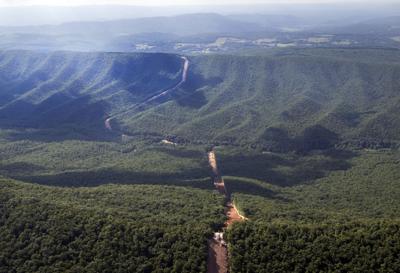 The fate of endangered species is becoming more of a danger to the Mountain Valley Pipeline.

In a letter Wednesday, the lead federal agency overseeing construction of the natural gas pipeline asked the U.S. Fish and Wildlife Service to reconsider its earlier finding that the project would not significantly harm protected fish and bats in its path.

The request from the Federal Energy Regulatory Commission and word from the Fish and Wildlife Service that it will comply came two weeks after the Sierra Club and other environmental groups filed a legal challenge to the service’s 2017 opinion.

Although the two agencies’ actions appear to do what the legal challenge had asked for, at least partially, it was not clear Wednesday whether ongoing work on the pipeline would have to stop.

Because the project does not have a valid biological opinion and incidental take statement, the two permits now being reconsidered, “all work on the pipeline should halt until a new one is issued,” the Sierra Club coalition said in a statement.

But there was no official word from FERC or the Fish and Wildlife Service that construction of the pipeline must stop while the permits are reviewed.

Last week, attorneys for the Sierra Club asked the 4th U.S. Circuit Court of Appeals to issue a stay of the service’s approvals, pending a legal review of claims that they do not adequately protect about a half-dozen endangered or threatened species.

The Fish and Wildlife Service and Mountain Valley indicated that they would oppose a stay, and the court gave them until Thursday to file written arguments. Nothing had been filed by Wednesday evening.

A Mountain Valley spokeswoman also did not answer questions about whether it would be forced to stop construction.

“The MVP team received and reviewed the FERC’s letter and we are encouraged that the process is moving forward,” Natalie Cox wrote in an email. “The remainder of the issues are related to pending litigation for which we cannot provide additional details at this time.”

On Aug. 15, three days after the Sierra Club challenged the Fish and Wildlife Service’s opinion, Mountain Valley told federal regulators that it was voluntarily suspending work on parts of the project where impacts to endangered species were in question.

“I think the important point here is that Mountain Valley voluntarily committed — in a way that is binding and enforceable — not to take listed species, regardless of the status of consultation,” Meagan Racey, a spokeswoman for the Fish and Wildlife Service, wrote in an email.

FERC spokeswoman Tamara Young-Allen said she couldn’t speculate on what impact, if any, the renewed consideration of the pipeline’s impact on endangered species will have on construction.

It was not clear exactly how much of the 303-mile pipeline through West Virginia and Southwest Virginia was covered by Mountain Valley’s voluntary suspension. Documents filed with FERC indicate that work along about 100 miles of the pipeline, most of them in Virginia, would be suspended to limit impacts on the Roanoke logperch, an endangered species.

In asking for a stay, attorneys for the Sierra Club argued that Mountain Valley’s self-imposed suspension allowed it to “stabilize and restore” parts of the pipeline. Since then, work harmful to endangered species has continued “under the guise of stabilization,” the environmental groups argued.

“Local residents have observed a flurry of construction activity after the voluntary suspension became effective on Aug. 15, 2019,” they wrote in court papers. “These activities — including delivering new pipe to the right-of-way, welding pipe on the right-of-way, and lowering pipe into the trench and burying it — go well beyond what is required to ‘stabilize’ the right-of-way.”

Mountain Valley says it had already laid about 230 miles of the pipeline before the suspension and hopes to complete the $5 billion project by the middle of next year.

In its letter Wednesday to the Fish and Wildlife Service, FERC wrote that four endangered or threatened species — the Roanoke logperch, the candy darter, the Indiana bat, and the northern long-eared bat — could be impacted by levels of sedimentation and land movement not anticipated when the biological opinion was released in November 2017.

The candy darter, a colorful fish found in a handful of streams that feed the New River, was added to the endangered species list after the opinion was completed.

Critics say that running a 42-inch diameter pipe across steep mountain slopes and through clear-running streams can kill endangered species and destroy their habitat. Sedimentation washed from construction sites can clog streams where fish lay eggs and feed, they say, and cutting trees to clear a 125-foot wide construction easement can be harmful to bats.

The Fish and Wildlife Service will now take a second look at those impacts, based on new information that has come to light since construction began in February 2018.

“Mountain Valley Pipeline should read the writing on the wall and shut down this project once and for all.”