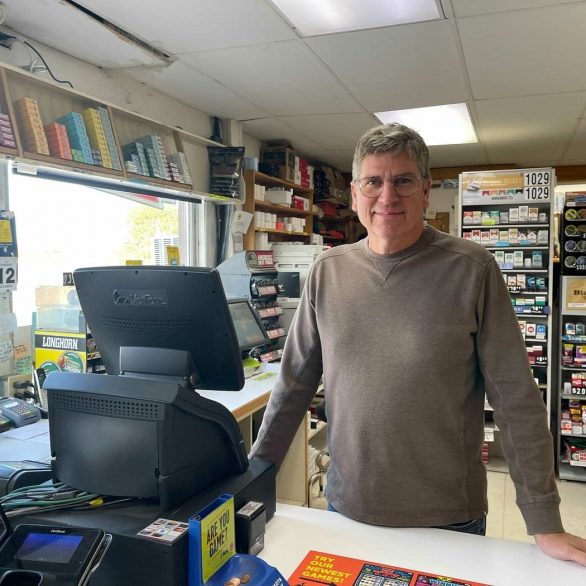 For Towns Along Line 3, Pipeline Workers Brought Welcome Boom — While It Lasted

After a quite extraordinary year, life in the small town of Backus is back to mostly ordinary.

On a recent weekday, the town’s main street was quiet. A few cars were parked in front of the post office and around the corner by the meat market.

In the kitchen of the Corner Store and Restaurant on Highway 371, cooks loaded plates with fried eggs and hash browns for a handful of diners.

It’s a much different scene from earlier this year, during the peak of construction on the Line 3 oil pipeline, when hundreds of pipeline workers were living and working in the area.

Corner Store owner Dave Sheley said they would start showing up at his convenience store at 5 a.m. to stock up on food for the workday.

“We’d have people just lined up back all the way to the cooler sometimes,” he recalled.

Sheley had to open earlier and add staff to help with the morning rush. He installed a second coffee pot and a heated display case for sandwiches.

Keeping up with the rush was a challenge, Sheley said. But after two pandemic-related shutdowns of his restaurant, he said the pipeline workers were a “godsend” that showed up at just the right time.

“It was tough on us sometimes,” he said. “But in general, it was like, ‘Oh, thank you.’ Because we would have been really hurting there for a while without it.”

Now that Line 3 is operating and most of the pipeline workers have moved on, Sheley said he has scaled back staffing and food orders — and expectations for the future.

“You look at our sales this year. … We’re not going to expect that this coming year,” he said. “Anyone who thinks that they’re going to, I think, is probably a little bit misguided.”

For the past year, this small town in Cass County with about 250 residents was a central hub for the Line 3 project. A staging area on the outskirts of town hummed daily with trucks, workers and equipment.

All the activity sometimes caused traffic jams on Backus’ quiet streets. It also gave a boost to local businesses, as all those workers stayed in motels, ate in restaurants and stocked up on supplies at local hardware stores.

At the peak of construction, there were more than 4,000 workers involved with the Line 3 project. About 700 workers remain, said Enbridge spokesperson Juli Kellner. The pipeline started operating on Oct. 1.

That short-term burst of activity is normal for a pipeline project, said Louis Johnston, an economics professor at the College of St. Benedict and St. John’s University.

During construction, local communities see a wide variety of benefits, Johnston said, including work crews spending their money in town and buying supplies they need.

“Once it’s built, it’s basically just carrying crude oil through an area,” he said. “Unless there’s some maintenance that needs to be done, the local area isn’t going to notice its effects.”

Enbridge has stressed that communities along the Line 3 corridor will benefit from millions of dollars in increased property tax revenue.

The Canadian-based company also has invested in community initiatives and nonprofits, a total of $1.4 million last year, plus another $3 million in grants to environment and habitat restoration efforts in the region, Kellner said.

While the large influx of Line 3 workers may be over, the timing of it — just after the COVID-related shutdown — may have saved some struggling businesses, said Mike Paulus, executive director of the nonprofit Cass County Economic Development Corp.

“We may never know how many businesses were on the precipice of closing their doors after a historically difficult time, and were saved,” Paulus said.

It wasn’t just restaurants that saw a surge in business. Line 3 workers frequently came into B&L Automotive in downtown Backus for oil changes and repairs on their personal and work vehicles, said co-owner LeAnne Pollock.

After construction on the pipeline wrapped up a couple of weeks ago, most of those workers left town, leaving the regular flow of local customers.

“They kept us busy. They were great people,” Pollock said. “It was sad to see them all go.”

At the Backus Locker, a butcher and meat processing shop, co-owner Janis Schmid was spreading beef jerky on a tray to be loaded into the smoker. Schmid said their retail shop saw an increase in customers from Line 3, as did other local businesses.

“It was a nice way to come through after the pandemic,” Schmid said. “Because there [were] people around and they were purchasing local stuff within their areas where they were working, so it helped everybody.”

Schmid said she and her husband, David, already work six days a week, so it was difficult to extend their hours to accommodate the pipeline workers’ schedules.

She said they did hire two women — a spouse and a girlfriend of pipeline workers — who were looking for work. They left when the project finished, Schmid said.

“It’s like part of your family leaving,” she said.

The temporary nature of the surge didn’t surprise most Backus residents, said Blair Ecker, pastor of Pine Mountain Gospel Church. It’s located in the town’s former elementary school, along with a Christian school and a thrift shop.

“It was completely expected,” he said. “It was going to be a boom while they were here, and then they were leaving.”

With stories of oil-boom towns in North Dakota on his mind, Ecker said he was a little worried about so many pipeline workers flooding into quiet Backus.

But for the most part, Ecker said the surge of workers was a positive experience. They were friendly and didn’t cause problems, he said. One project manager attended Ecker’s church regularly with his wife, up until last week.

“We would always tease them that they were going to end up becoming Backus residents,” Ecker said, laughing. “They didn’t.”

Ecker said some residents in town got temporary jobs on the Line 3 project, either working on the pipeline itself, or in supporting roles, such as security or as COVID-19 testers.

And his church did benefit indirectly from Line 3: A few parishioners who owned property along the pipeline corridor profited by leasing it to Enbridge. They donated more money to the church, which was able to pay off its building debt.

But Ecker said aside from some local business owners, most people here weren’t really affected financially by Line 3.

“Individually, I didn’t see an influx in personal income with the pipeline being here. And I think I’m the majority of Backus residents.” he said. “I was happy for those that did.”

Line 3 did bring some challenges, Ecker said. The influx of a large number of workers looking for a place to live put a strain on rental housing in Backus, where poverty and housing instability are already problems.

It also was controversial, and the target of protests by environmental activists, Native American tribes and others who opposed the project.

A few of those protests took place in Backus, prompting an increase in law enforcement activity and curious interest from residents, Ecker said.

“It was a traffic jam every time there was a protest — every time somebody chained themselves to something — because everybody wanted to see,” he said.

In a log cabin office on a downtown Backus corner, real estate agent Mark Tietjen had an up-close view of the activity created by the Line 3 project.

“All hours of the day, it was this constant flow of traffic,” said Tietjen, office manager at Rusty’s Up North Realty.

The flood of workers needed places to stay, and Tietjen said he took hundreds of calls from people looking for places to rent.

“I’m surprised they all found rentals,” he said. “It’s such a small town, but somehow they managed.”

Some local residents rented out their lake cabins or extra rooms to pipeline workers — not just in Backus, but other nearby communities such as Hackensack, Pine River and Walker.

Tietjen only took one call from a worker who wished to buy a home. But he hopes that some of the workers may have liked the woods and lakes region so much that they’ll return to buy a home or cabin someday.

There’s another trend happening that could have a longer economic impact on the region. Since COVID-19, more people are moving up north to homes or cabins and working remotely, Tietjen said.

Unlike pipeline workers moving on to the next job, those newcomers appear to be here to stay.