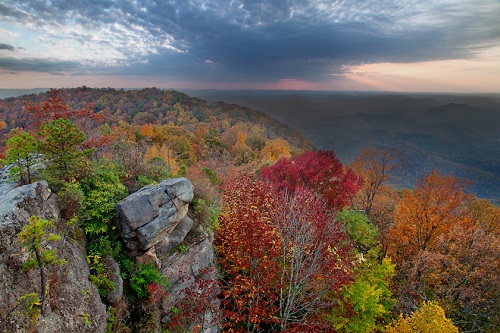 The U.S. Forest Service has approved, for the second time, Mountain Valley Pipeline’s pathway through the Jefferson National Forest.

A decision from James Hubbard, undersecretary of natural resources and the environment for the U.S. Department of Agriculture, was posted to the forest’s website early Monday morning.

About three hours later, a coalition of environmental groups sued, seeking to have the permit set aside for a second time.

Hubbard’s decision came more than two years after the 4th U.S. Circuit Court of Appeals vacated Mountain Valley’s permit, ruling that the Forest Service did not take into account the amount of erosion and sedimentation that would be caused by running the largest natural gas pipeline in Virginia along steep mountain slopes.

After more than two years of review, the agency issued a new permit that in large part mirrors its 2017 approval for the buried pipeline’s route through two sections of the forest — in Giles and Montgomery counties and Monroe County, West Virginia — that total 3.5 miles.

The decision “redeems the Forest Service’s commitment to ensure the pipeline minimizes impacts and meets standards for sustainability and conservation of natural resources,” the service said in a news release.

But that will likely be a question for the 4th Circuit, where the Sierra Club and seven other environmental groups brought their latest challenge Monday.

Mountain Valley “still can’t show that there’s any way to build this pipeline without violating the laws that protect our national forests and clean water,” said Nathan Matthews, senior attorney for the Sierra Club.

No construction can start in the forest until Mountain Valley has obtained all state and federal authorizations. The joint venture of five energy companies building the pipeline must still obtain a right of way from the U.S. Bureau of Land Management, which was struck down in the same 2018 decision that invalidated the Forest Service’s permit.

Meanwhile, another permit that governs nearly 1,000 stream crossings for the pipeline was stayed Oct. 16 by the 4th Circuit, which is considering a legal challenge of that authorization by the U.S. Army Corps of Engineers.

Also pending is a third lawsuit that seeks to overturn a decision by the U.S. Fish and Wildlife Service, which ruled last September that the pipeline is not likely to jeopardize protected species of fish and bats.

Critics said Monday’s decision was made by a political appointee who rushed to get the matter finalized before President Donald Trump’s departure from office Jan. 20.

“In the vacuum of responsible leadership the Forest Service is doing the bidding of MVP, a floundering and destructive limited liability company,” Bill Wolf, chair of Preserve Craig, said in a statement released by the Sierra Club.

The permit amends the Jefferson National Forest’s resource plan to allow the 303-mile pipeline to pass through public woodlands — and under a section of the Appalachian Trail atop Peters Mountain — on a path that will take it through Southwest Virginia.

Endorsement from the Forest Service is needed before the Bureau of Land Management can grant a right of way. An official with the bureau could not be reached for comment Monday.

It’s unclear when the right of way will be granted, according to Mountain Valley spokeswoman Natalie Cox.

“Upon approval, and before construction would begin in the Jefferson National Forest, we will also need to consider other relevant factors, such as weather and the availability of government oversight,” Cox wrote in an email.

Construction of the pipeline — except for in the forest and across water bodies — is continuing “within the constraints of winter weather conditions,” she wrote.

Mountain Valley expressed confidence once again that it will complete the pipeline by the end of the year, allowing 2 billion cubic feet of natural gas a day to be transported to markets along the East Coast.

But in its weekly update on pipeline construction, Height Capital Markets predicted Monday that construction will continue into 2022.

That’s because it appears more likely that Mountain Valley will have to seek individual permits for its stream crossings, rather than rely on a general approval from the Army Corps known as a Nationwide Permit 12.

With the nationwide permit unlikely to survive a court challenge, a more detailed analysis of each water body would be required through individual permits, which generally take a year to obtain, Height said.

Last month, the Virginia Department of Environmental Quality said it would not grant water quality certifications under a Nationwide Permit 12 to any natural gas pipeline larger than 36 inches in diameter. That would eliminate Mountain Valley, which is installing a 42-inch diameter pipe.

However, that provision would not apply in the likely event that the incoming Biden administration would freeze the Nationwide Permit 12, Height said.