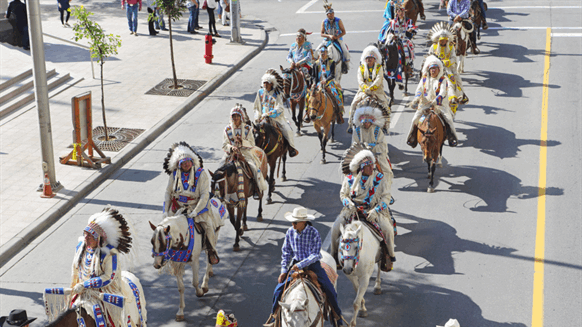 TC Energy Corp. will allow an alliance of Canadian indigenous communities to pursue a stake in the Keystone XL pipeline project that faces a growing threat of being halted by a new U.S. administration.

The pipeline operator signed a memorandum of understanding with Natural Law Energy, a treaty alliance of five first nations in Alberta and Saskatchewan, allowing them to pursue an equity stake in Keystone XL and “other potential related midstream and power projects,” the companies said in a statement. A final agreement is expected in the fourth quarter. TC Energy said it isn’t financing the deal.

“The size of the equity agreement is substantial but we are not in a position to disclose until the definitive agreements are in place in the next 4-6 weeks,” Terry Cunha, a TC Energy spokesman, said by email. “We will continue to be the majority owner of the pipeline as the NLE equity will by a minority stake.”

The decade-old proposal to build a 830,000-barrel-a-day pipeline connecting Alberta with Nebraska has become symbolic of the battle between environmentalists and the Canadian oil sands industry. Democratic Presidential Nominee Joe Biden, leading in many polls against President Donald Trump, has pledged to halt the project.

Keystone XL was rejected by former U.S. President Barack Obama in 2015 and approved just over a year later by newly elected President Trump, but since then it has been mired in court battles, even as construction started on the Canadian portion of the line.

Should the agreement be completed, Keystone XL would become the first major export pipeline to include indigenous ownership, a concept that has grown increasingly accepted by Alberta’s oil industry as a way to lessen opposition to oil and gas projects. Energy infrastructure, including pipelines, often face fierce push-back from local First Nations whose traditional territory is most affected.

Separately, at least three consortiums of indigenous groups are seeking a stake in the Trans Mountain pipeline to Canada’s Pacific Coast. The federal government bought the project two years ago to keep it alive after Kinder Morgan Inc. threatened to cancel it because of opposition in British Columbia for a number of indigenous communities along the route.