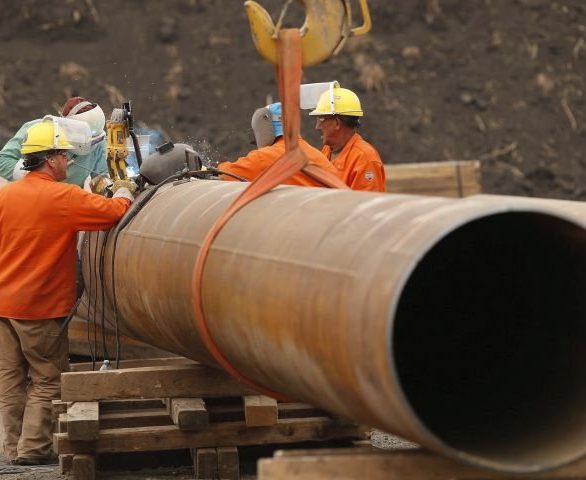 Iowa would delay eminent domain process for carbon pipelines until next year, under bill passed by House

Companies requesting to use eminent domain for carbon sequestration pipeline projects couldn’t receive a state hearing until early next year, under a bill that the Iowa House passed Thursday.

The legislation is an attempt to ease Iowa landowners’ concerns about the potential use of eminent domain by companies that have proposed multiple major pipeline projects that would cut across the state. Supporters said the measure would encourage the negotiation of voluntary agreements between companies and landowners while the Legislature is not in session.

“A negotiation being had with the threat of eminent domain hanging over a landowner’s head is not a negotiation,” Rep. Bobby Kaufmann, R-Wilton, said from the House floor Thursday. “What this does is provide certainty for landowners while we’re gone, that the playing field for negotiations is fair.”

Three companies are proposing building pipelines across Iowa that would trap carbon emissions from ethanol and fertilizer plants and store them underground. Eminent domain powers would allow the pipeline companies to condemn land needed to build their projects and to force unwilling landowners to sell easements at “fair market value.”

Kaufmann, who had introduced a separate, similar proposal last week aimed at delaying eminent domain hearings, made the proposal as an amendment to the House’s administration and regulations budget bill, House File 2565, which funds several state functions.

Kaufmann’s amendment was added to the much larger bill through a voice vote, meaning lawmakers called out their votes at the same time, and no individual lawmakers’ votes were recorded either for or against the amendment. Lawmakers frequently request full, recorded votes on amendments but did not do so with this proposal.

The underlying bill passed 60-30, with all Republicans except Rep. Brian Lohse, R-Bondurant, voting yes and all but seven Democrats voting no.

During debate on Kaufmann’s amendment, Democrats offered mixed reactions to the proposal. Rep. Steve Hansen, D-Sioux City, said the legislation was akin to “kicking the can down the road” because none of the pipelines would be built over the next year.

But House Minority Leader Jennifer Konfrst, D-Windsor Heights, said she supported Kaufmann’s proposal and hopes it leads to a larger discussion about eminent domain and the potential impact of the pipelines. It’s an issue, she said, that makes for “strange bedfellows.”

“Rep. Kaufmann and I are on the same side, and others are on different sides — it’s all just very strange,” she said. “I think part of the problem here is that we as a body have not tackled this issue in a big way. We haven’t had the hard conversation.”

Kaufmann said he would be open to having a more comprehensive discussion next year.

►More: What we know about three carbon capture pipelines proposed in Iowa

Under the legislation, which is now headed to the Senate, Kaufmann said the Iowa Utilities Board could not schedule a hearing before Feb. 1 in which a carbon sequestration company is requesting the right to use eminent domain for a project. The proposed moratorium would take effect as soon as the bill becomes law.

“Negotiations can still proceed. Meetings can still proceed,” Kaufmann told reporters before the vote. “But landowners will not have that threat of the unknown — of ‘Because the Legislature’s out of town, are they going to pull a fast one and attempt condemnation while they’re gone?'”

Minutes after approving Kaufmann’s amendment, the House took up a separate proposal from Rep. Jeff Shipley, R-Birmingham, that would have completely eliminated the use of eminent domain rights for carbon capture pipelines. But after his opening comments, Shipley withdrew his amendment from consideration.

Summit Carbon Solutions has applied to build a pipeline

Only one of the three companies, Summit Carbon Solutions, so far has applied to the Iowa Utilities Board for permission to build a hazardous-liquid pipeline. Summit’s request for a permit asks the board to grant it permission to use eminent domain.

Under current law, it could be months before the state board holds public hearings on Summit’s petition and issues a decision. Summit has said it anticipates receiving a decision in the first quarter of 2023.

The proposal that passed the House is the latest of a handful of proposals lawmakers made this year to limit the use of eminent domain on the projects, but the other proposals have not moved forward.