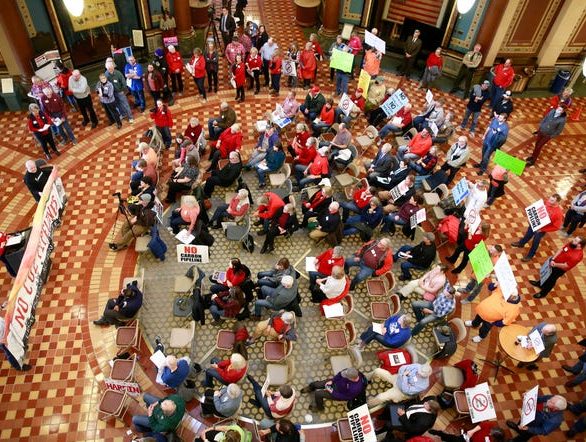 Kathy Stockdale says she has the unlucky distinction of having two of three planned carbon capture pipelines across Iowa proposing to run through the 550-acre Hardin County farm her family has owned for a century.

Summit Carbon Solutions’ $4.5 billion project would run between her and her son, Kurtis’, homes, while Navigator CO2 Ventures’ $3 billion pipeline would cut across a nearby field.

“This land is part of us. We’ve worked hard to make improvements,” said Stockdale, 71, adding that she feels “like my property rights are being taken away.”

Stockdale was among about 100 Iowans Tuesday who joined what was billed as a “people’s public hearing” at the Iowa Capitol. They called on lawmakers to impose stronger restrictions on the pipeline developers’ use of eminent domain to force unwilling landowners to sell access to their property for their projects.

Carolyn Raffensperger, an Iowa environmental lawyer, said the pipeline projects have created “strange bedfellows,” bringing together environmentalists, landowners and farmers. “We don’t always see eye to eye, but we do on this,” said Raffensperger, executive director of the Science & Environmental Health Network.

Summit and Navigator, along with Archer Daniel Midlands Co., have proposed capturing carbon dioxide emissions from ethanol and other industrial ag plants, liquefying the gas under pressure, then transporting it through the pipelines and sequestering it deep underground at sites in North Dakota and Illinois.

The companies say the projects would help ethanol and other energy-intensive agricultural industries remain viable as the nation seeks to cut net greenhouse gas emissions in half by 2030 to address climate change.

But some landowners are unwilling to host the pipeline, saying they are concerned that it will damage cropland. The Iowa House passed a bill last week that would prevent state regulators from holding eminent domain hearings for carbon sequestration pipeline projects for nearly a year. Supporters say the measure would encourage voluntary agreements between companies and landowners.

But Stockdale and others Tuesday said the bill doesn’t go far enough to lift the threat of eminent domain. She supports a bill that failed to gain traction this year, prohibiting private developers from using eminent domain on farmland.

State Sen. Jeff Taylor, a Sioux Center Republican who proposed the bill Stockdale favors, said Tuesday he will vote for delaying eminent domain’s use even though he thinks a stronger measure is needed.

“I support any effort that tries to protect landowners from eminent domain abuse,” Taylor said. “But it’s not nearly enough. We need a permanent solution rather than a stopgap measure.”

George Cummins, who owns a farm in Floyd County on the proposed Summit route, said he believes the bill would allow lawmakers to “get through mid-term elections without answering any hard questions.”

“They’re kicking the can down the road,” said Cummins, who owns a 40-acre farm near Charles City, where he now lives. Cummins said he raised his children on the acreage and still plants a garden every year at the farm, which another farmer rents.

Jesse Mazour, the Sierra Club’s Iowa conservation coordinator, said her group and others organized the rally because Gov. Kim Reynolds has ignored requests that she meet with landowners who oppose the project.

So have most Iowa legislators, Mazour said. Landowners are “the most important stakeholders in all of this,” she said, adding that the groups staging Tuesday’s event invited all state lawmakers to attend.

Summit said Tuesday it’s signing easements on about 170 miles of its proposed 650-mile route across 29 counties in Iowa.

“Regardless of the misinformation the Sierra Club continues to spread, Summit Carbon Solutions is working closely with landowners across the Midwest to create a mutually beneficial partnership,” the Ames company said in a statement.

“That partnership, which is based on securing voluntary easements, will unlock new opportunities for ethanol producers and farmers who remain vital to the economy both here in Iowa and across the Midwest,” Summit said.

Taylor said the state needs laws that better protect Iowans who don’t want to sell their land. Pipeline agents are “putting the screws to landowners to try to get them to sign these easements,” he said.

“That’s part of the problem,” he said. “How voluntary is it … when you have the threat of eminent domain hanging over your head? If you resist, they’re going to get your land anyhow.”

“We need something that limits the number of contacts that they have,” she said.

Steve Kenkel, a Shelby County supervisor, said he was at the Capitol because “I think the process is flawed.”

“The lack of local control … undermines trust,” said Kenkel, adding that he and other county supervisors across the state are getting inundated with calls from residents, landowners and “even city residents” who live near the pipeline routes.

Both Navigator and Summit have held public meetings in counties their pipelines would cross. But Summit is further along than the other projects, submitting its permit request to the Iowa Utilities Board in January.

The company proposes building a 2,000-mile pipeline that would reach across Iowa, Minnesota, Nebraska, and South Dakota to North Dakota, where carbon would be sequestered.

And ADM, partnering with Wolf Carbon Solutions, has proposed capturing carbon at its ethanol plants in Cedar Rapids and Clinton, and moving it through a 350-mile pipeline, also to an Illinois site where it would be permanently sequestered.