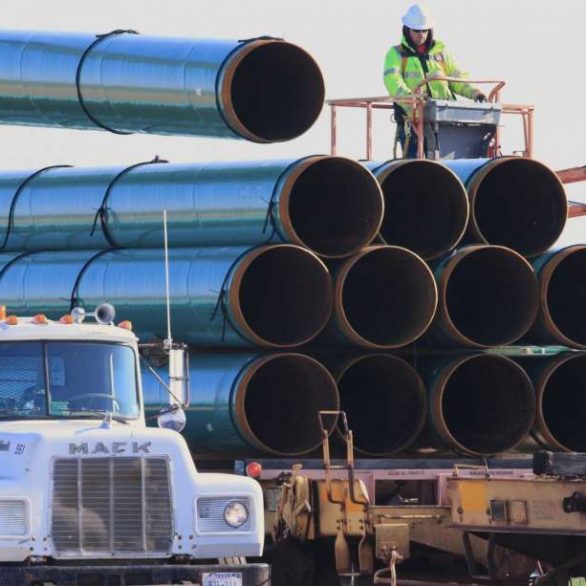 A federal judge on Wednesday ordered the U.S. Army Corps of Engineers to conduct a full environmental review of the Dakota Access pipeline, nearly three years after it began carrying oil despite protests by people who gathered in North Dakota for more than a year.

U.S. District Judge James Boasberg wrote that the easement approval for the pipeline remains “highly controversial” under federal environmental law, and a more extensive review is necessary than the environmental assessment that was done.

Standing Rock Chairman Mike Faith called it a “significant legal win” and said it’s humbling that the protests continue to “inspire national conversations” about the environment.

“Perhaps in the wake of this court ruling the federal government will begin to catch on, too, starting by actually listening to us when we voice our concerns,” Faith said in a statement.

Officials with the Corps and Energy Transfer, which owns the pipeline, did not immediately respond to phone messages left by The Associated Press. Craig Stevens, spokesman for the GAIN Coalition, a group that supports large infrastructure projects, said the decision could jeopardize the nation’s economic and energy security.

“This is a stunning decision that flies in the face of decades of widely accepted practice,” Stevens said in a statement. “The Dakota Access Pipeline is already the most studied, regulated, and litigated pipeline in the history of our country and has been safely operating for nearly three years.”

It’s not clear whether the ruling will shut down the pipeline. Boasberg ordered both parties to submit briefs on whether the pipeline should continue operating during the period of the new environmental review.

The pipeline was the subject of months of protests, sometimes violent, during its construction in late 2016 and early 2017 near the Standing Rock Sioux Reservation that straddles the North Dakota-South Dakota border. The Standing Rock tribe continued to press litigation against the pipeline even after it began carrying oil from North Dakota across several states to a shipping point in Illinois in June 2017.

The $3.8 billion, 1,172-mile (1,886 kilometer) underground pipeline crosses beneath the Missouri River, just north of the Standing Rock reservation. The tribe draws its water from the river and fears pollution. Texas-based Energy Transfer insisted the pipeline would be safe.

Permits for the project were originally rejected by the Obama administration, and the Corps prepared to conduct a full environmental review. In February 2017, shortly after Donald Trump took office, the Corps scrapped the review and granted permits for the project, concluding that running the pipeline under the Missouri River posed no significant environmental issues. The Corps said that opinion was validated after an additional year of reviewing the project, as ordered by the court.

Boasberg said during one of his many opinions on the case that the project “largely complied” with requirements for the National Environmental Policy Act, but left the door open for the tribes when he said there were “substantial exceptions” to meeting those rules. He ordered further review on the potential impact of the project.

The ruling issued Wednesday focused on whether “the project’s effects were likely to be highly controversial.” The judge cited concerns with the leak detection system, operator safety record, the impact of North Dakota winters and the analysis of a worst-case scenario for a spill.

Much of Boasberg’s ruling was based on a 2019 case decided by a Washington D.C. federal appeals court that considered whether agencies adequately dealt with expert criticisms such as those in the Dakota Access Pipeline case. Applying that case, Boasberg wrote that he “ultimately concludes that too many questions remain unanswered.”

Earthjustice attorney Jan Hasselman, who represents the Standing Rock Tribe, said the Obama administration “had it right” when it denied the permits and his group will continue to argue the case until the pipeline is shut down. He said because a full environmental review could take a year or two, it could be “potentially conducted under the next presidential administration.”

“This gives the Army Corps a new opportunity to get this right,” Hasselman said.