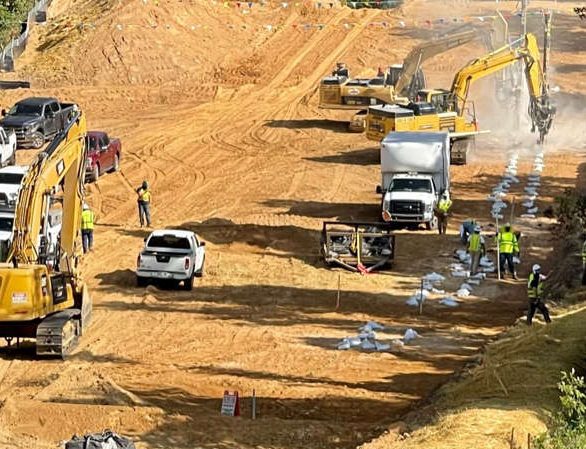 Construction of the Mountain Valley Pipeline is ramping up again in Roanoke County. And landowners on Bent Mountain have filed a motion for a temporary injunction to stop blasting they say could damage the aquifer that supplies them with drinking water.

Wednesday morning, crews from Precision Pipeline were drilling on property owned by the Terry family. They were preparing to do more blasting along the pipeline right-of-way. But observers said a number of the drill holes near a creek and spring had filled with water. And they said the work should stop while the U.S. Army Corps of Engineers is evaluating the pipeline’s impact on water resources.

“Right here, they are screwing with my water,” Red Terry told WDBJ7. “Right here they are going to blow up the aquifer that feeds the streams.”

“It’s improper. It’s illegal. It violates both the letter and the spirit of the law,” said attorney and clean water advocate Tammy Belinsky. “And it shouldn’t be happening.”

A spokesperson for the Mountain Valley Pipeline said pipeline opponents are spreading false information based on unsubstantiated claims.

“The construction activities occurring on Bent Mountain include drilling holes to a depth of less than 15 feet below the surface,” Natalie Cox said in a written statement. “Given the local terrain, the fact that water may be present in the holes is normal and there is no evidence that an aquifer has been penetrated. We remain confident that once the VDEQ inspectors assess the situation and complete their investigation, they will conclude there is no merit to these latest claims.”

A hearing on the request for a temporary injunction is scheduled Friday morning in Roanoke federal court.