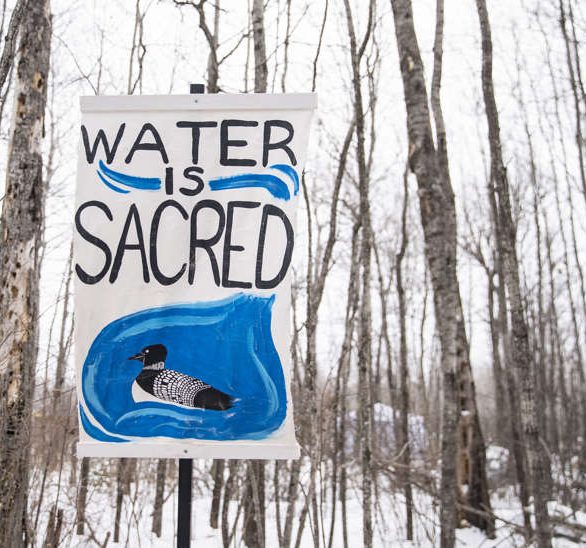 In a novel suit naming Manoomin — the Ojibwe word for wild rice — as the lead plaintiff, the White Earth Band sued the Department of Natural Resources (DNR) earlier this month for actions it has taken regarding Enbridge’s controversial new Line 3 oil pipeline.

The DNR Thursday filed for a injunction in U.S. District Court in Minnesota, saying the White Earth court doesn’t have jurisdiction to hear the suit. The DNR itself and DNR employees named in the lawsuit are not members of the White Earth band, the DNR court filing said.

“The White Earth Band of Ojibwe lacks jurisdiction over non-members for actions occurring off the reservation.”

Manoomin, which grows in water, is sacred in Ojibwe culture, and a traditional source of food. The lawsuit is the first “rights of nature” case brought in a tribal court in the U.S., and the second such case to be filed in any court in the U.S.

Other plaintiffs in the suit include several White Earth tribal members and Indian and non-Indians who have protested along the 340-mile Line 3 construction route in Minnesota.

White Earth, some other Ojibwe bands and environmental groups accuse the DNR of failing to protect the state’s water by allowing Calgary-based Enbridge to pump up to 5 billion gallons of groundwater from construction trenches during a devastating drought.

The Ojibwe bands also say the DNR has violated the rights of manoomin along with multiple treaty rights for tribal members to hunt, fish and gather wild rice outside reservations.

In early June, the DNR approved Enbridge’s request to move ten times as much water as originally planned during pipeline construction. Enbridge had requested the increase in “construction dewatering” early this year.

The DNR concluded that Enbridge’s increase in dewatering – temporarily moving water from the construction site — was necessary for the safety of workers in the pipeline’s trench.

The DNR has said that the increased dewatering would not significantly impact nearby wetlands or surface waters, even during a drought.

The new pipeline will replace Enbridge’s current Line 3, which is corroding and operating at only 51 % of capacity. New Line 3, which partially follows a new pipeline route, will restore the full oil flow, and Enbridge says it is a significant safety improvement.

Environmental groups and Ojibwe tribes say the new pipeline will open a new region of Minnesota’s lakes, rivers and streams to contamination from oil spills, as well as exacerbate climate change.