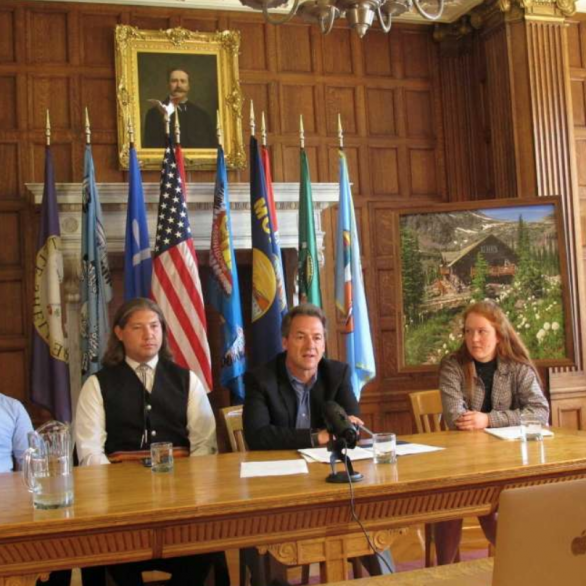 HELENA, Mont. (AP) — Montana Gov. Steve Bullock said Monday during an online meeting about climate change that he’s open to supporting the Keystone XL pipeline “if it’s done right,” a departure from other Democratic presidential candidates who condemn the proposed oil line from Canada as an environmental threat.

Bullock held the town hall-style discussion on Facebook to engage young people on climate change and to announce he is forming a panel to make recommendations on how to reduce emissions in Montana and prepare the state for the effects of climate change.

Bullock also said Montana would become the 25th state to join the U.S. Climate Alliance, a group created in response to President Donald Trump’s withdrawal from the 2015 Paris agreement on climate change.
But the governor didn’t appear to be prepared for the pipeline question that came from Avery Old Coyote, a Crow tribal member who was one of the young people he invited to sit next to him during the broadcast.

Bullock initially said it was important to consult with Native American tribes whose land the pipeline would pass through and noted that the oil from the Alberta tar sands being hauled over land now is at risk of spills.

But Old Coyote pressed him for an answer, prompting Bullock to decry how the Trump administration has gone about approving the pipeline but leaving himself open to the project itself.

“I’ve said from the beginning that — look — if it’s done right, we can’t take it off the table,” Bullock said.

Bullock has expressed outright support for the pipeline in the past. His more measured comments Monday underscore the tension of being governor of an energy-producing state while trying to gain traction as one of nearly two dozen Democratic presidential candidates.

Most Democratic candidates oppose the proposed pipeline from Canada, citing its potential to add to greenhouse gas emissions. An exception is U.S. Sen. Michael Bennet of Colorado.

Less than a month after he was sworn in as governor in 2013, Bullock wrote to then-President Barack Obama saying he strongly supported the pipeline project. He wrote that it would create jobs and help domestic energy security, but he said the president should ensure the pipeline does not harm agriculture, wildlife and water resources.

Bullock made similar statements of support in 2014 and 2015.

He said Bullock may have been talking as Montana’s governor but that he had Bullock’s presidential candidacy in mind when he asked the question.

“I don’t want to say I can’t support him, but it’s going to make it harder,” Old Coyote said.

The 1,184-mile (1,900 kilometer) pipeline would begin in Alberta and run through Montana and other states before tying into existing infrastructure in Nebraska.

The $8 billion project has been tied up for years, most recently by legal challenges from environmental advocacy groups that say the Trump administration did not consider potential oil spills and other environmental effects when it issued a 2017 permit.

Earlier this year, Trump tried to invalidate that lawsuit by issuing a new permit for the pipeline and revoking the challenged permit, leading to new lawsuits.