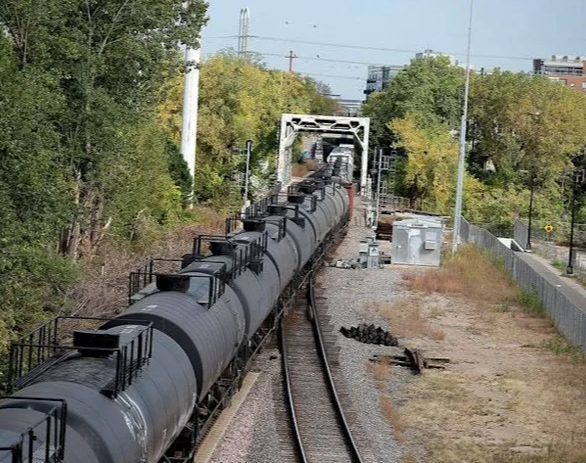 A new Canadian railroad venture is sparking a significant increase of 15 to 20 oil trains that run through Minnesota each month.

Oil-by-rail has stoked safety concerns in Minnesota and elsewhere since 2013 when an oil train in Quebec caught fire and exploded, killing 47 people.Since then, several more oil trains in North America have derailed and spilled, some catching fire.

Canadian Pacific declined to say how many of the new oil trains it’s currently running. But during a conference call with analysts in July, the railroad’s chief marketing officer said he expects “business to ramp up to 15 to 20 trains per month during the third quarter,” which ended Sept. 30. Their destination: Port Arthur, Texas.

Canadian Pacific and the company behind the new Alberta, Canada, rail venture, USD Partners, say they’re using a new technology that makes shipping oil safe enough it need not be categorized as a flammable hazardous cargo.

“From an innovation, sustainability and safety perspective, this is a game changer,” Canadian Pacific CEO Keith Creel said in 2019 when the project was announced.

USD Partners said testing of its proprietary oil blend indicates that if it’s spilled into water during a derailment, it will float. Unlike lighter oil, heavy Canadian crude can eventually sink and diffuse, making cleanup efforts more difficult.

But the venture and USD’s claims have some skeptics.

“There are a lot of problems with this proposal and the complete lack of transparency around it,” said Frank Hornstein, the Minneapolis DFLer who heads the Minnesota House’s Transportation Finance and Policy Committee.

“We don’t know the characteristics of this material being transported,” he said. “We have to depend on the company making a profit off of it to guarantee its safety.”

Plus, Hornstein said it’s imprudent to launch such new fossil fuel projects “at a time when a climate emergency is building day by day.”

Most Canadian crude bound for the United States — by far Canada’s biggest oil export market — travels on pipelines, particularly Enbridge’s corridor of six lines across Minnesota. Enbridge recently completed a $3 billion-plus pipeline to replace Line 3, which was corroding and able to operate only at 50% of capacity.

One of Enbridge’s arguments for the controversial pipeline was that without it, the number of oil trains in Minnesota would multiply, said Laura Triplett, a geology and environmental studies professor at Gustavus Adolphus College.

“Now we are getting more trains anyway,” she said.

The Canadian Pacific’s route runs the length and breadth of Minnesota, hugging the Mississippi River in the southeast. For the past 21 months, Department of Public Safety records indicate CP is the largest rail shipper of oil in the state.

The new oil trains running from USD’s terminal aren’t likely to be tallied in those state counts. USD said the oil is not hazardous cargo as defined under U.S. and Canadian transportation regulations.

Heavy Canadian crude, known as bitumen, is considerably less volatile and combustible than lighter oil from North Dakota, which was at the heart of the massive accident in Quebec eight years ago. But Canadian crude can still catch fire.

USD says oil processed through its new technology is not flammable — and therefore not hazardous. A key to that claim involves something called diluent.

Bitumen from Canada’s oil sands is so thick that it’s often extracted from big open pit mines, a particularly carbon-intensive process. To make the stuff fluid enough to transport, oil shippers use diluent made from lighter — and more flammable — hydrocarbons.

Diluent typically makes up about 30% of the oil shipped through pipelines. Sometimes, oil will be moved directly off pipelines to railcars with that 30% diluent level maintained. Other times, trains will transport heavy crude with about 15% diluent.

USD Partners’ said that with its “DRUbit” process, the diluent level of a barrel of oil is reduced to 5% and the diluent that remains has fewer light hydrocarbons.

“By design, DRUbit reduces diluent to allow the product to not meet the flammable and hazardous classifications of the U.S. Department of Transportation and Canada’s Transport of Dangerous Goods regulations,” USD said in a statement to the Star Tribune.

U.S. and Canadian transportation regulators say it is the shipper’s responsibility to classify whether oil and other cargoes are hazardous.

For years, companies in Canada’s oil patch have been working on ways to remove diluent from rail cars — and not just for safety reasons. Economics plays a key role.

USD’s terminal in Hardisty, Alberta — a joint venture with the Canadian firm Gibson Energy — receives crude from pipelines with 30% diluent. It recycles much of that diluent and ships it back to Alberta oil producers to reuse, a particularly cost-effective measure.

Publicly traded USD Partners has a long-term agreement with oil producer ConocoPhillips to ship crude from Alberta and is looking for more customers.

Shipping oil by pipelines is generally significantly cheaper than by rail. But USD Partners claims that its technology is cost-competitive with pipelines — and analysts say that is possible.

The economics for USD Partners and the Canadian Pacific should get even better if CP’s $27 billion purchase of Kansas City Southern goes through.

The Canadian Pacific’s system runs south to Kansas City. From there, the KCS has extensive ties to the Gulf Coast — the largest U.S. oil refining hub — including Port Arthur, Texas. ConocoPhillips has a refinery nearby.

In Port Arthur, USD Partners has built a new terminal, which like its Hardisty venture, was completed this summer. Like CP, KCS has been instrumental in advancing the new DRUbit rail service to Port Arthur.

But with the merger, CP will be able to offer single-line service all the way to the Gulf Coast, which should reduce costs for all traffic moving on the combined railway.

“That single-line service, you’ll hear us talk a lot about that,” Kansas City Southern CEO Pat Ottensmeyer told stock analysts in September. “That is significant in that it avoids interchanges, avoids those [situations] that generally add cost and add time.”