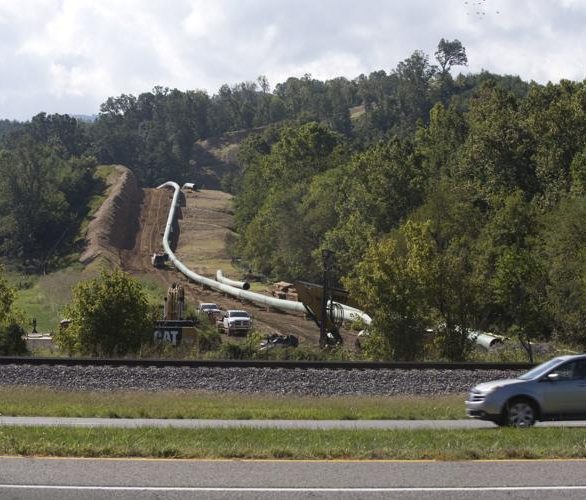 ROANOKE — The projected cost of building the Mountain Valley Pipeline has gone up by another half a billion dollars.

And the expected completion date, most recently slated for mid-2020, has been pushed back to the end of that year.

In an announcement Tuesday, Mountain Valley attributed the latest delay and revised cost estimate — now at between $5.3 billion and $5.5 billion — to “various legal and regulatory challenges.”

The Pittsburgh-based company has lost three sets of federal permits, following legal challenges by environmental groups that argued the buried natural gas pipeline would pose risks to the water, land and wildlife along its 303-mile route.

”We have encountered unforeseen development challenges; however, we continue to make progress towards ultimate completion,” Diana Charletta, president and chief operating officer of EQM Midstream, the lead partner in the project, said in a statement.

“While the temporary setbacks have caused schedule delays and cost overages, completion of the MVP project is critical to serving the growing demand for domestic natural gas in the mid-Atlantic and Southeast regions of the United States,” Charletta said.

When work began in February 2018, Mountain Valley said it would be done by the end of that year at a cost of $3.7 billion. Several delays and cost increases have been announced since then.

As costs have risen steadily, some opponents have voiced hopes that investors will pull out of the joint venture, made up of five energy companies.

But considering the amount of work that has already been completed on the pipeline’s route through West Virginia and Southwest Virginia, one financial analyst who has followed the project closely saw a “very low probability” of that happening.

“I don’t think that EQM has any intention of giving up on this project, given how much capital has already been devoted,” said Josh Price, a senior energy analyst for Height Capital Markets, an investment banking firm in Washington, D.C.

Three compressor stations and interconnections in West Virginia, a major part of the installation, have been completed, Mountain Valley said.