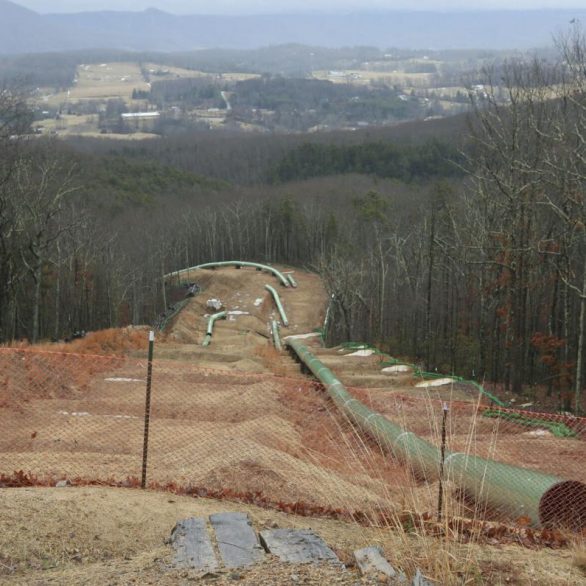 Unhappy with the way it has been treated by a three-judge panel of an appellate court, Mountain Valley Pipeline is asking for a new slate of judges to hear the next round of its long-running legal battle with environmentalists.

In an unusual move, the company building a natural gas pipeline through Southwest Virginia filed a motion last month requesting the 4th U.S. Circuit Court of Appeals to assign a new panel at random.

Mountain Valley is hoping for better luck than it had with a panel that presided over 12 earlier challenges of government approvals for it and the now-defunct Atlantic Coast Pipeline. Those three judges, it says, vacated or stayed all but two of the permits, effectively killing Atlantic Coast and threatening to do the same for Mountain Valley.

“The perception created by this Court’s deliberate formation of a special ‘pipeline panel’ – actually a ‘Mountain Valley panel’ – threatens public confidence in the Court’s legitimacy,” the motion reads.

The Richmond-based Fourth Circuit, which consists of 15 active judges and three senior judges to hear appeals from five states, has a computer program that randomly assigns three-member panels for incoming cases.

However, the court’s rules allow for the same judges initially appointed at random to remain with a case when it comes up again, under certain circumstances.

When the Fourth Circuit was first asked to decide a case involving Mountain Valley – an appeal of a Roanoke judge’s 2017 decision on the company’s powers of eminent domain – the court’s program indiscriminately selected three judges.

The luck of the draw went to Chief Judge Roger Gregory and Judges Stephanie Thacker and James Wynn. That led to their assignment to most, but not all, of the future cases in which federal and state permits issued to Mountain Valley were contested repeatedly by environmental groups and local opponents.

But the Fourth Circuit did not follow its internal operating procedures, which only allow such assignments in limited cases, Mountain Valley asserts.

The rule states, in part: “Every effort is made to assign cases for oral argument to judges who have had previous involvement with the case” to preside over a motion made before oral arguments or a prior appeal in the matter.

Mountain Valley contends that the current cases – which involve petitions from environmental groups seeking the reversal of approvals for the 303-mile pipeline to cross streams and wetlands in Virginia and West Virginia – involve neither a pre-argument motion nor a prior appeal.

The company “therefore respectfully asks the Court to correct this departure from its own procedures,” George Sibley, a Richmond attorney who represents Mountain Valley, wrote in court papers.

Not only does the Fourth Circuit’s repeated reliance on the same three judges run counter to its rules, Mountain Valley argues, it also has created a public perception “of a deck stacked against large infrastructure projects in general and one private party specifically.”

The motion cites reports in The Roanoke Times about how the court’s overall record has evoked a saying by pipeline opponents: “May the Fourth be with you.”

Also included is an editorial from The Wall Street Journal, which opined that “oddly, repeated challenges keep landing before the same three-judge panel of Roger Gregory, James Wynn, and Stephanie Thacker even though cases are supposed to by assigned to judges at random.”

Steve Emmert, a Virginia Beach lawyer and an authority on state and federal appeals who publishes the online Virginia Appellate News & Analysis, said he has never seen a motion like the one filed by Mountain Valley.

The most recent actions by Judges Gregory, Thacker, and Wynn came earlier this year when they cited environmental concerns in rejecting two permits – for the second time – that had been issued to Mountain Valley.

One of the authorizations allowed the pipeline to cross through a 3 1/2 mile segment of the Jefferson National Forest in Giles and Montgomery counties; the other was a biological opinion by the U.S. Fish and Wildlife Service that found endangered species would not be jeopardized by the construction of the buried pipeline.

Mountain Valley then asked the full Fourth Circuit to reconsider the panel’s decisions, which it declined to do.

“That tells me it is unlikely that the court will grant them the relief that they are now seeking,” Emmert said.

The Sierra Club and other environmental groups, which are contesting the latest permits for water crossings, urged the court not to grant Mountain Valley’s request.

“The crux of MVP’s motion is that MVP has grown dissatisfied with that initial assignment because it has lost more often than it thinks it should have,” wrote attorneys Derek Teaney and Spencer Gall, who represent the coalition.

They say Mountain Valley voiced no objections to the Gregory-Thacker-Wynn trio when it was first appointed at random. In that case, the panel upheld a decision from U.S. District Judge Elizabeth Dillon that favored the pipeline. Dillon ruled that she lacked jurisdiction to hear opponent’s challenges of the company’s use of eminent domain to take property for the controversial project.

Most of the approximately half-dozen cases that involved eminent domain were omitted from Mountain Valley’s calculations that it won only two of the 12 cases decided by the panel.

There is no reason to disqualify the three judges for making rulings that were clearly supported by the facts, the motion continues. Those facts show “systemic flaws in the permitting of MVP’s pipeline, rather than ‘a deck stacked against it,’ “ Teaney and Gall wrote.

Many of the cases decided by the panel involved what it found to be inadequate oversight by government agencies to control muddy runoff from the massive construction project. Mountain Valley has been cited nearly 400 times by Virginia regulators for violating erosion and sedimentation control regulations since work began in 2018.

In support of the Fourth Circuit’s process of assigning three-judge panels, the Sierra Club cited an article from the Texas Law Review. Two law professors noted that having the same judges hear similar cases “arises out of notions of judicial efficiency, allowing those already familiar with a case to remain involved.”

Legal battles have delayed the completion of the pipeline by nearly four years and doubled its cost, now estimated at $6.6 billion.

The future of the project could rest on what the Fourth Circuit does next.

Challenges of a Virginia State Water Control Board approval for stream crossings, and a similar authorization by West Virginia, are now before the court.

Mountain Valley is also seeking, for the third time, a permit struck down earlier by the court for the pipeline to pass through the national forest and an opinion from the Fish and Wildlife Service that construction would not jeopardize endangered species. Should those approvals be re-issued later this year, additional lawsuits would likely follow.

The last brief due in Mountain Valley’s request for the random selection of a new panel was filed last week. A decision is expected in the coming weeks or months.