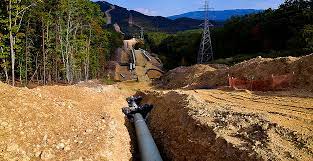 For the second time, environmental regulators in North Carolina have rejected a proposed extension of the Mountain Valley Pipeline into their state.

The decision Thursday by the Department of Environmental Quality came less than two months after a federal appeals court sent the case back for additional review, ruling that the department had not adequately explained its reasons for denying a water quality certification for the controversial project.

The North Carolina DEQ initially turned down the request for a 75-mile extension of the pipeline, called MVP Southgate, in large part because of uncertainties that remain with the main project, a 303-mile natural gas pipeline under construction from northern West Virginia to Pittsylvania County.

Should the main project fail, its extension “would be a pipeline from nowhere to nowhere, incapable of carrying any natural gas,” Daniel Smith, director of the department’s division of water resources, wrote in a letter Thursday that reissued the earlier denial.

The letter addressed questions raised by the 4th U.S. Circuit Court of Appeals about why the state had denied approval outright, rather than issuing a conditional certification based on Mountain Valley regaining all of its permits that were earlier suspended for environmental reasons.

“The history of the Mainline Project demonstrates why such a condition would be inadequate,” Smith wrote, noting that Mountain Valley has been cited hundreds of times for violating erosion and sediment control regulations.

Opponents of the pipeline applauded the decision.

“We’ve said it before and we’ll say it again: the era of fracked gas pipelines is over,” Caroline Hansley of the Sierra Club said in a statement. “MVP’s effort to extend this dirty, dangerous fracked gas pipeline into North Carolina has now been rejected twice.”

MVP Southgate spokesman Shawn Day wrote in an email that the project met all of North Carolina’s water quality standards, and “we strongly disagree with the NCDEQ’s decision to deny.”

Mountain Valley’s next move was unclear Thursday. The joint venture of five energy companies building the main pipeline has previously run into trouble with stream crossings, leading it to change methods of water body crossings that will require different approvals.

Day said “we’re evaluating all options” for MVP Southgate, which would start at the main pipeline’s terminus in Pittsylvania County and run for 75 miles into North Carolina.

Although interstate pipelines are governed largely by the Federal Energy Regulatory Commission, Mountain Valley was required to obtain a water quality certification from North Carolina following approval from the federal government.

Last June, FERC found that there was a public need for the natural gas that Southgate would transport. The decision was based primarily on a contract between Mountain Valley and Dominion Energy, which will receive about 80% of the pipeline’s supply for distribution to homes and businesses in central North Carolina.

But at a news conference Thursday in Charlotte, North Carolina, opponents argued that Dominion has other, less expensive options.