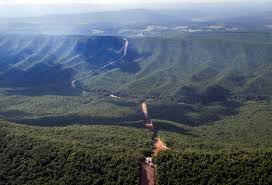 Citing uncertainty over whether the Mountain Valley Pipeline will ever be completed, North Carolina’s Department of Environmental Quality has denied a water quality certification for an expansion of the natural gas pipeline.

Questions about whether the main pipeline will regain its suspended permits present a “critical risk” to the so-called Southgate extension, the DEQ said Tuesday.

“Given the uncertain future of the MVP Mainline, North Carolinians should not be exposed to the risk of another incomplete pipeline project” and the environmental problems it would bring, Michael Regan, secretary of the department, said in a written statement.

In the nearly three years since the Federal Energy Regulatory Commission approved the mainline project — which is planned to run for 303 miles from northern West Virginia to Southside Virginia — three sets of key permits have been set aside after legal battles over the pipeline’s environmental effects.

FERC in June approved the Southgate extension, which will reach another 75 miles from the pipeline’s terminus in Chatham into North Carolina, but ruled that construction could not begin until MVP had its permits in hand.

By denying a state permit that usually follows FERC approval, North Carolina did what Virginia would not.

The State Water Control Board found in December 2017 that there was a “reasonable assurance” that Virginia’s waters would not be polluted by building the massive pipeline across steep mountainsides and under streams and rivers.

After repeated failures of erosion control measures sent harmful sediment flowing from construction zones, the board considered revoking the permit. But on the advice of the Attorney General’s Office, it later said the state lacked the authority to overrule FERC.

Roberta Bondurant, co-chair of the Protect Our Water, Heritage, Rights coalition, said Virginia’s failure was highlighted by the actions of its neighbor to the south.

“Virginia officials have improperly absolved themselves of their duty to protect communities and environments in the Commonwealth in favor of rolling over for the gas industry,” Bondurant said.

“Praise and gratitude to NCDEQ! The agency has repeatedly questioned the need for MVP Southgate and now refuses to risk North Carolina’s water quality and aquatic wildlife for a company that has flouted environmental protections in Virginia and West Virginia,” said Katie Whitehead, a landowner in Pittsylvania County whose farm would be directly affected by the Southgate project.

North Carolina environmental officials have also expressed skepticism of the need for the extension.

“This has always been an unnecessary project that poses unnecessary risks to our environment,” Regan said.

Despite the latest setback, Mountain Valley officials said they expected to regain the company’s permits in time to have the pipeline operating early next year. Completion of Southgate is expected in 2021, they say.

Under North Carolina law, the company has 60 days to appeal DEQ’s decision.

“The MVP Southgate team is currently evaluating its options, but continues to target bringing this important project into service in 2021 to meet public demand for natural gas in southern Virginia and central North Carolina,” spokesman Shawn Day said.

Dominion Energy, which purchased a North Carolina natural gas company originally planned to be Southgate’s primary customer, will receive about 80% of the pipeline’s gas for distribution to homes and businesses.

As for its suspended permits, Mountain Valley has said it expects the U.S. Fish and Wildlife Service to conclude that the pipeline will not jeopardize endangered species or their habitats.

The long-delayed decision was anticipated in July, but had not come by late Wednesday afternoon.

That approval would lead FERC to lift a stop-work order that has been in effect since October 2019, the company hopes, which would be followed by the U.S. Army Corps of Engineers issuing new permits for nearly 1,000 crossings of streams and wetlands.

The final hurdle for Mountain Valley would be to get renewed permission to run the pipeline through the Jefferson National Forest as it enters Virginia. The U.S. Forest Service has said it expects a decision by year’s end.
Pipeline opponents have vowed to file additional litigation should any of the permits be granted.

If a project already two years behind schedule is delayed even further, North Carolina DEQ hearing examiner John Hennessy wrote in his report, Southgate’s sole reliance on Mountain Valley would make it “a pipeline from nowhere to nowhere.”