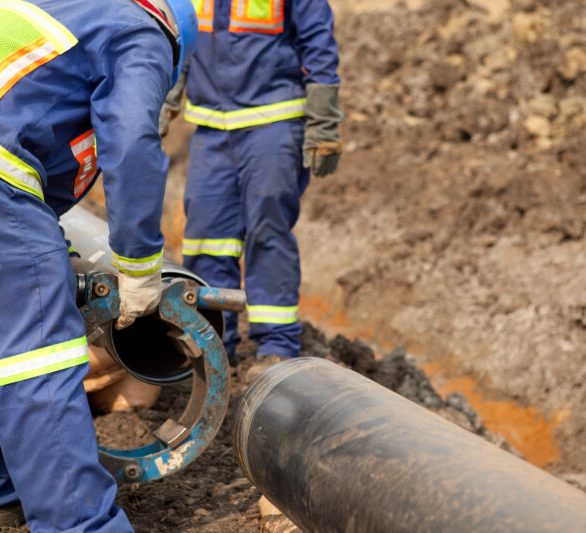 The city of San Diego is about to drop its latest plan to fight climate change, but local unions representing workers in the natural gas industry are worried it could cost them jobs.

Across the state, cities are seeking to ditch gas and require buildings be equipped to run solely on electricity for all energy needs including heating and cooking. And union-represented gas workers are paying attention.

In short, they worry the trend could mean more work for electricians and less work for the people digging trenches or laying and maintaining gas pipes.

“It’s not just a pipeline, it’s a lifeline,” said Joe Cruz, executive director of the California State Council of Laborers, which represents the workers who do heavy digging for pipe laying. “(Natural gas) creates many good-paying jobs. The ban on natural gas and decarbonization efforts in California will have a major impact on laborers across the state, including San Diego if that moves forward.”

Staff in the city of San Diego’s Sustainability and Mobility Department know the city has to cut planet-warming emissions from buildings somehow — 20 percent of the city’s emissions came from natural gas-use in homes and businesses in 2019. But the city is moving more slowly than San Francisco, for instance, where county supervisors banned natural gas in new buildings last year.

While San Diego works on a potential plan, staffers are conscious of the livelihoods attached to the industry and hired the same consultants San Francisco County used before passing its policy to study the potential impacts to the workforce.

“These aren’t just jobs, but people and their families,” said Alyssa Muto, the city of San Diego’s director of sustainability and mobility.

San Diego, like Encinitas, could decide to require new buildings be equipped to power everything — including stoves, water heaters, air conditioning and heating — with electricity. But new building growth is slow, accounting for just one percent of the building stock every year. The bulk of gas infrastructure is in existing buildings.

The city could be aggressive and require retrofits so buildings run entirely on electricity instead of gas. Or the city could give natural gas another pass under its next Climate Action Plan and focus instead on making buildings more energy efficient.

“I don’t know that building electrification has to be the lever, but you do have to get emissions out of the buildings somehow,” said Ashley Rosia-Tremonti, program manager in San Diego’s sustainability department.

Unions representing gas workers argue that relying solely on electrifying California’s buildings is the wrong answer to the climate crisis.

“We want (policymakers) to put online other affordable, safe and convenient forms of energy that everyday people will get confidence in using before they decide to shut down the natural gas industry,” Cruz said.

He means alternative fuels like so-called renewable natural gas and hydrogen energy. Hydrogen is a carbon-free fuel that can be mixed with natural gas to lower its greenhouse gas emission content, but the technology is only slowly penetrating the U.S. market. San Diego Gas and Electric, owned by a top liquified natural gas exporter Sempra, recently announced efforts to ramp-up production of these alternative fuels to offset the emissions the company generates, a popular climate policy goal dubbed “net zero.”

“The time to pick a winner and loser here is long gone,” Ellis said. “If we’re going to take fighting climate seriously, we have to have every option on the table.”

This puts local unions at odds with environmentalists who see anything short of electrification as strategies to perpetuate fossil fuels.

“It’s going to be important for us as climate justice advocates to work with our friends in labor to find the right solution and make sure nobody is left behind in this transition,” said Mat Vasilakis, co-director of the Climate Action Campaign. “But we have to get rid of methane gas infrastructure if we want a climate safe and ready future.”

But if San Diego goes electric, it could end jobs for one group of union workers, while creating new opportunities for workers represented by a different union.

That’s because unionized laborers — whether gas, electric or plumbing workers — are trained and certified for a specific type of work. This is partly how unions try to divide work fairly among construction trades.

“That eliminates the Laborers’ opportunity to deliver energy when you purely electrify,” Cruz said. “Electricians have jurisdiction, especially in California, in making wire connections. A laborer can’t perform that function. It requires certification.”

Energy sector union labor around the world is fighting for a so-called “just transition” of the workforce as countries seek to curb climate change: If policymakers take gas work away, they would have to help those workers find different jobs — ones that pay and provide the same quality of life or cover the gap in wages with government money.

“The challenge here is that both policymakers and labor leaders are really trying to figure out how to thread the needle on an actual just transition,” said Carol Kim, business manager of the San Diego Building Trades Council, which represents unions from these sometimes-competing trades. “The problem is, environmental policies get passed before that stuff gets put in place.”

One growing job sector in Southern California could provide a bridge: water.

Plumbers and pipefitters pushed back when San Francisco County banned natural gas in new buildings until policymakers struck a compromise. Supervisors agreed to make more pipe work by pushing new water-recycling requirements, like one requiring large buildings to treat and reuse their own wastewater, as the San Francisco Chronicle reported.

San Diego’s got a lot of pipe-related work in its future, too. The city’s stormwater system, which controls where water goes after it hits the ground from rain, needs about $1.27 billion in repair over the next five years. San Diego is also building a multi-billion wastewater recycling system called Pure Water. And there’s a so-far-uncalculated amount of work preparing the city’s water infrastructure to handle climate-induced sea level rise.

Ellis, from the pipefitters union, acknowledged workers could be retrained to do different kinds of pipe projects, but said it’s not that simple.

“You’re essentially asking someone in their 40s to go back to school and retrain and educate themselves, then take a pay cut,” he said.

[Disclosure: Mitch Mitchell, SDG&E’s vice president of state governmental affairs and external affairs, is a member of Voice of San Diego’s board]