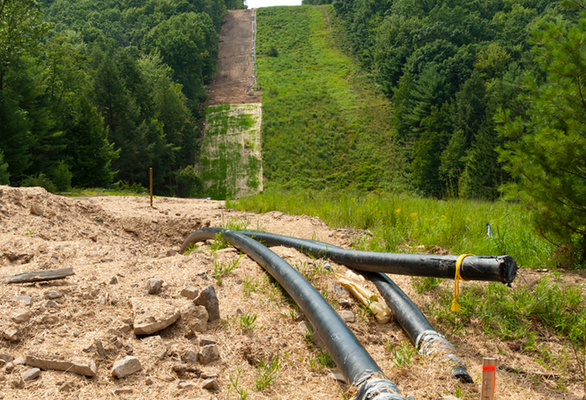 Pennsylvania fined an energy company more than $30 million on Friday but will allow it to resume construction on its problem-plagued natural gas pipelines.

The state Department of Environmental Protection issued one of its largest-ever civil penalties in the wake of an investigation that found Energy Transfer had violated numerous regulations during construction of the Revolution pipeline in western Pennsylvania. A 2018 landslide along the pipeline’s route in Beaver County triggered a gas explosion and fire that destroyed a home, a barn and several cars, and prompted an evacuation.

The department said the Dallas-based company has “demonstrated its intention to correct its unlawful conduct to DEP’s satisfaction.”

The decision means that Energy Transfer will be allowed to resume construction on its troubled Mariner East pipeline network that transports natural gas liquids across southeastern Pennsylvania. The company has incurred millions of dollars in fines and weathered several shutdown orders over Mariner East, primarily due to polluted waterways and drinking water wells. At least two criminal investigations involving Mariner East are underway.

The Department of Environmental Protection said it would keep a close eye on Energy Transfer during construction and would reinstate the permit ban if the company violated the environmental laws. Energy Transfer promised compliance and said Friday it was “pleased to have reached an agreement with the DEP that will allow us to safely complete the construction projects we have underway in Pennsylvania.”

But environmental groups blasted the settlement.

“Pennsylvanians jaded by the Department of Environmental Protection’s poor track record for holding polluters to account will be unmoved by the agency’s historic fine on ETC, the company that has laid waste to communities across the commonwealth,” the Better Path Coalition, a statewide network of environmental groups, said in a statement. “Instead, they will shudder at the thought that the company will be able once again to get permits for its projects.”

Kurt Knaus, spokesman for the Pennsylvania Energy Infrastructure Alliance, a coalition of business groups and labor unions, said the end of the permit ban means that “skilled laborers who have been waiting to get back to work will finally be back on the job, putting their training to use for the safe, responsible development of critical infrastructure.”