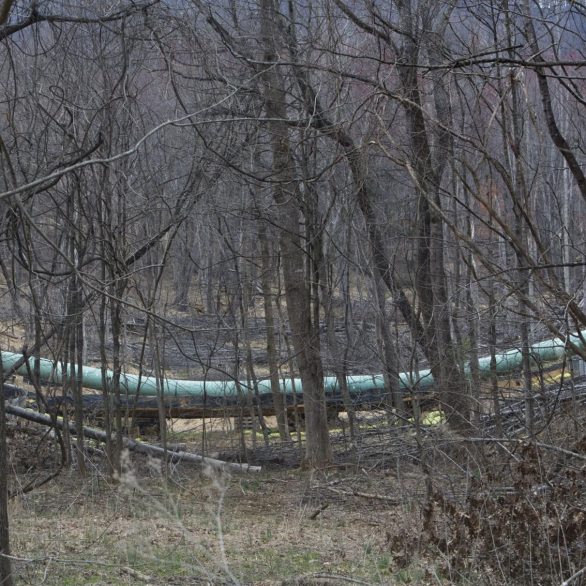 It’s hard to count how many times Virginia environmental regulators have been asked to stop work on the Mountain Valley Pipeline...

Since construction of the natural gas pipeline began last year — and was quickly followed by problems with storm runoff clogging nearby streams with sediment — state lawmakers, advocacy groups and individuals have asked the Department of Environmental Quality to halt work on the project time and time again.

What is easier to count is the number of stop-work orders issued by DEQ on any construction project since 2002: Zero.

The last time DEQ formally stopped work was in July 2001, when it said a Newport News company was causing a “massive disturbance of the wetlands ecosystem” on a 43-acre tract near an industrial park in the city. An agency spokesman said at the time that it was the first such order in more than a decade.

Stop-work orders are “as rare as the ivory-billed woodpecker,” said David Sligh, conservation director of Wild Virginia, referring to a critically endangered species that is close to extinction.

Frustrated by DEQ’s lack of action on repeated requests to stop Mountain Valley from causing additional pollution, Wild Virginia and other environmental groups are taking a different tack.

A complaint filed late Friday with the Federal Energy Regulatory Commission, the lead agency overseeing construction of the 303-mile pipeline, asks that it rescind its earlier approval of the project. The 24-page filing also asks for a stop-work order.

FERC temporarily ceased work on the $5 billion project last August, after a federal appeals court threw out a permit for the pipeline to pass through the Jefferson National Forest. The suspension was lifted in large part later in the same month.

Since then, FERC — like DEQ — has declined to issue a stop-work order, despite repeated requests from environmental groups and people living along a pipeline route where there have been repeated violations of erosion and sediment control measures.

But the complaint filed Friday is different from the countless requests made to FERC previously, which were sent to the commission’s executive secretary and often received no response. Sligh said Wild Virginia’s action goes to the commissioners of FERC, who are appointed by the president, for a formal decision.

The process includes a 20-day public comment period, and allows other parties to intervene.

In a letter Saturday to the State Water Control Board, Sligh asked its members to join in his request.

Last December, the board voted to start a process to consider revoking a water quality certification it gave to Mountain Valley in 2017, shortly after the project was approved by FERC. But the board soon reversed course, saying it lacked the authority to stop a pipeline that was largely governed by the federal government.

“We are calling on you to intervene in this action and join us in calling for revocation and suspension by FERC — to tell FERC it should act where you felt you were unable to do so,” Sligh wrote in a letter to the board’s seven members, who are appointed by the governor.

Water board to meet

The water board is scheduled to meet Thursday in Richmond, and Sligh asked that the matter be added to its agenda.

Joining in the complaint were the Indian Creek Watershed Association, Preserve Craig and two people who live along the pipeline’s route through the two Virginias — Betty Werner of Franklin County and Neal Laferriere of West Virginia.

For the most part, the complaint cites issues that have been raised before: The lack of a permit from the U.S. Forest Service for the pipeline to cross the national forest, the court-ordered loss of a second set of permits for more than 1,000 stream and wetland crossings, and the violation of environmental regulations “on hundreds of occasions and on a project-wide basis.”

A lawsuit against Mountain Valley, filed by Virginia’s DEQ and the water board, accuses the company of breaking the rules more than 300 times. In a consent order filed by the West Virginia Department of Environmental Protection, the company has agreed to pay a $266,000 fine for violations in that state.

The findings by regulators show that “MVP is not serious about protections but is focused solely on ramming this project through with little regard for anyone else’s interests,” Wild Virginia said in a news release Saturday about its action.

Because the complaint was filed after 5 p.m. Friday, Mountain Valley and FERC could not be reached for comment.

In the past, Mountain Valley has stressed its commitment to environmental stewardship, saying that many of the violations “were the result of unprecedented rainfall through the spring and summer of 2018.”

The company had planned to finish the pipeline by the end of the year.

But in a filing last week with the U.S. Securities and Exchange Commission, its lead partner said regulatory challenges have pushed the date back to mid-2020. In the same filing, EQM Midstream said the project’s cost was expected to rise from $4.6 billion to as much as $5 billion.

Since May 30, The Roanoke Times has asked DEQ several times how many stop-work orders it has issued in recent years for construction projects of any kind. On Friday, spokeswoman Ann Regn confirmed that the last time was in 2001, involving a development project in Newport News.

DEQ believed the developer was doing unauthorized work in a wetland without the proper permits, she said. Construction was ordered to stop, sparking a legal battle that ended with a consent decree in which the company agreed to restore an area where it had dug trenches and filled wetlands.

In other cases, “developers may stop and they have stopped their projects to come into compliance in response to warning letters and notices of violations from DEQ,” Regn wrote in an email.

Last summer, after heavy rains and widespread runoff, Mountain Valley agreed to suspend construction in some areas until problems could be corrected. But that was not a formal stop work order like the one pipeline opponents want, and problems with erosion soon resumed.

Sligh, a former environmental engineer with DEQ, said the agency’s general approach is to encourage compliance through measures less drastic than a stop-work order.

While that may be a sound tactic in many cases, Sligh said Mountain Valley is a “prime example” of a project that has repeatedly violated state environmental regulations.

“What you’re doing is responding rather than working out front to prevent,” he said. “And that to me is a flawed approach.”

Two times this year, Del. Chris Hurst, D-Blacksburg, has asked DEQ to issue a formal stop-work order against Mountain Valley. His most recent letter, sent to director David Paylor on May 23, was signed by 20 other state lawmakers.

Other representatives from the region included Del. Sam Rasoul, D-Roanoke, Sen. John Edwards, D-Roanoke and Sen. Creigh Deeds, D-Bath . “I’m thankful to be one of many, many, many people,” who have joined the pipeline fight, Hurst said.

Hurst first asked DEQ to suspend work under its authority from a state law passed in 2018 that was aimed at Mountain Valley and a similar project to the east, the Atlantic Coast Pipeline. His second request was based on older law.

“I appreciate that the construction of the MVP is a concern of great importance to you, your constituents, and all Virginians,” Paylor wrote in a June 12 reply to Hurst.

However, he wrote, there are limits to a law that gives DEQ the power to order an immediate stop to construction if there is a “substantial adverse impact” to streams or wetlands, or if such an effect is likely to occur. “The law narrows both the area on which work can be stopped and the period of time” for the suspension, he wrote. DEQ officials have said they cannot stop work on the entire project, but instead are limited to problem areas. And once corrective action is taken, they say, any stop-work order must be lifted.

“With the exception of some very limited circumstances where private property owners have not allowed DEQ and/or MVP to access their property, MVP has corrected the violations,” the letter stated.

As for the state’s lawsuit against Mountain Valley, “the 300 violations that are repeatedly mentioned are not ongoing violations,” Paylor wrote. “A significant portion of these pose little to no threat to water quality and instead represent instances where the time frame for routine maintenance was exceeded.”

Paylor also said that many of the complaints made by citizens are not violations of law. “Turbid or muddy water leaving the site after it has been treated by an approved and properly maintained control structure is not a violation,” he wrote.

Deeds, who sponsored the 2018 law that gave DEQ enhanced stop-work power, said it was weakened during the legislative process. Nonetheless, Deeds believes the agency had the authority to stop work previously, before he introduced the bill at DEQ’s request.

“They have a right to protect Virginia’s natural resources,” he said. “Why else do we have a Department of Environmental Quality?”