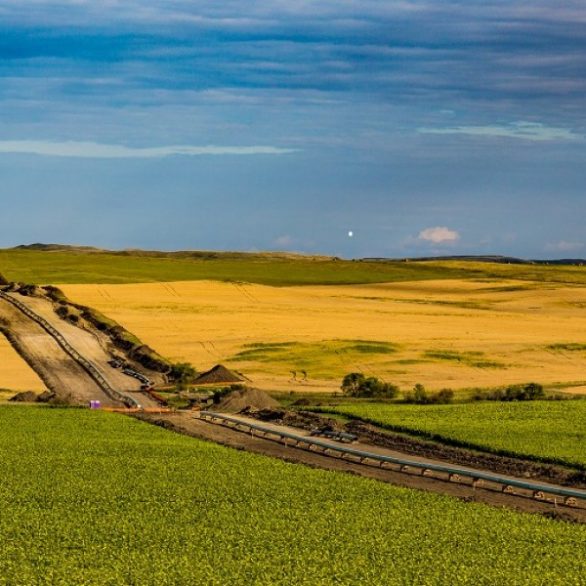 After protesters disrupted construction of an oil pipeline in North Dakota by chaining themselves to construction equipment and pitching tents along the route, oil and chemical companies found a way to keep it from happening again.

They made it a crime.

The companies, including Koch Industries Inc., Marathon Petroleum Corp. and Energy Transfer Partners LP — whose Dakota Access project in North Dakota was targeted three years ago — lobbied state legislatures to effectively outlaw demonstrations near pipelines, chemical plants and other infrastructure. Nine states have gone along so far, in some cases classifying the activities as felonies. More are considering measures.

The lobbying campaign, documented in state disclosures and other records reviewed by Bloomberg News, has raised concerns about corporate influence muzzling free speech.

Industry representatives portray their efforts as a necessary counter to the increasingly aggressive tactics of activists, which include videotaping confrontations with police for posting on social media.

“There is nothing more important to the fuel and petrochemical industries than the safety of our people, our communities and our facilities – and willful, disruptive and dangerous interference with critical infrastructure puts that safety at risk,” the American Fuel and Petrochemical Manufacturers said in a statement. “Our advocacy is intended to protect public safety and private property, not chill First Amendment rights, which don’t entitle a person to destroy property or create public hazards.”

Their template is model legislation endorsed by the American Legislative Exchange Council, the conservative group backed by the Charles Koch Institute, which encourages state lawmakers to advance ready-made bills on topics ranging from gun rights to tort.

The new state laws vary, but they generally create a new, more serious category of trespassing when it’s done near energy infrastructure and interferes with construction, carrying felony prison sentences of as much as five years and fines of as much as $10,000. It some cases, it can include activists who have permission from landowners to mount protests in the fields and trees near-critical energy infrastructure. Some states have extended penalties to organizations found to have “conspired” in the activity.

The state efforts respond to a wave of activism by environmentalists opposed to oil, gas, and coal because burning those fossil fuels creates carbon dioxide emissions that drive climate change. The activists increasingly are focused on fighting the infrastructure needed to transport and process those fossil fuels.

The AFPM, and one of its top members, Marathon Petroleum, spearheaded efforts to get ALEC to support the model legislation in 2017, according to two people familiar with the matter who asked not to be named discussing internal strategy.

Marathon, AFPM and three other trade groups, including the American Chemistry Council, sent state lawmakers a letter urging support for the approach before they convened at an ALEC summit two years ago. The result – ALEC’s endorsement of a ready-made, template bill – was an essential boost to creating the new felony protest crimes nationwide.

Louisiana enacted legislation expanding its critical infrastructure law to include pipelines in May 2018 as Energy Transfer Partners was building its Bayou Bridge pipeline across the state and self-dubbed “kayaktivists” were mounting water-based protests against the project. Energy Transfer backed the legislation, according to a report at the time from KATC, a Lafayette, Louisiana television station. The Bayou Bridge pipeline was completed in March — after protesters were charged with critical infrastructure trespassing crimes in connection with it.

And in Texas, a new critical infrastructure felony – which goes into effect Sept. 1 – was backed by a slew of oil, pipeline, power and chemical companies, with representatives of Dow Chemical, Enbridge Energy, Koch Industries, Occidental Petroleum, Phillips 66 and Valero lodging support, according to a Senate witness list.

Refiner Valero pressed for action during construction of the Diamond Pipeline, which is now carrying crude from Cushing, Oklahoma, to the company’s refinery in Memphis, Tennessee. A Valero representative encouraged Oklahoma’s governor to enact the measure, with a phone call saying it would help deter “disruptive actions,” according to correspondence obtained by the watchdog group Documented.

The state measures gained momentum after high-profile protests against Energy Transfer Partners’ Dakota Access Pipeline in 2016 and 2017 that led to confrontations with police and more than 700 arrests. Activists led by the Standing Rock Sioux tribe camped along the oil pipeline’s route in North Dakota and sometimes locked themselves to construction equipment. At one point, police sprayed water, fired tear gas and shot rubber bullets at the demonstrators, with videos of the altercations shared widely online.

After months of protests – and after President Donald Trump reversed his predecessor’s rejection of the project – Energy Transfer completed the line in 2017.

The Trump administration is moving on a separate path to go after pipeline foes and blunt the power of states to block energy projects. Under Trump, the federal Pipeline and Hazardous Materials Safety Administration has asked Congress to allow 20-year-prison sentences for “damaging or destroying” pipelines.

Koch and other companies say action is needed to prevent harm to critical infrastructure and to the activists themselves. Koch Cos. Public Sector spokesman David Dziok said the company respects the right to peacefully protest and assemble, but “such demonstrations are not always peaceful” and “these laws are necessary – not only for the safety of the communities in which we operate but also for the safety of those exercising their rights to demonstrate.”

Magellan, an Oklahoma-based pipeline operator, said by email that it is “supportive of laws and regulations which are designed to protect critical energy infrastructure.”

And Marathon Petroleum stressed in an emailed statement that “clearly, there have been many who agree that this type of legislation is necessary to counter threats of vandalism that can disrupt emergency services and people’s lives.”

But Greenpeace’s Gibson said the state measures have been propelled by industry – not a public clamor.

“It’s the fossil fuel industry that wants to put its opponents in jail, not the average voter,” Gibson said. “We have never seen widespread rallies to make building petrochemical pipelines a national priority. This phenomenon illustrates the broad problem we have with undue corporate influence in U.S. politics, where the demand of a wealthy minority dictates the outcome for the majority.”

Critics say the laws are drafted so broadly they could ensnare not just protesters but property owners and hikers on land shared with energy infrastructure. “Just being in the wrong place at the wrong time,” could put someone at risk of five years in jail, said Pam Spees, a senior staff attorney with the Center for Constitutional Rights, which has filed a lawsuit challenging the Louisiana law.

“If the concern really was about protecting the physical infrastructure, there are already laws on the books that do that,” Spees said. Instead, these measures “are clearly targeting protests and expression that are clearly focused on pipelines and opposition to pipelines.”