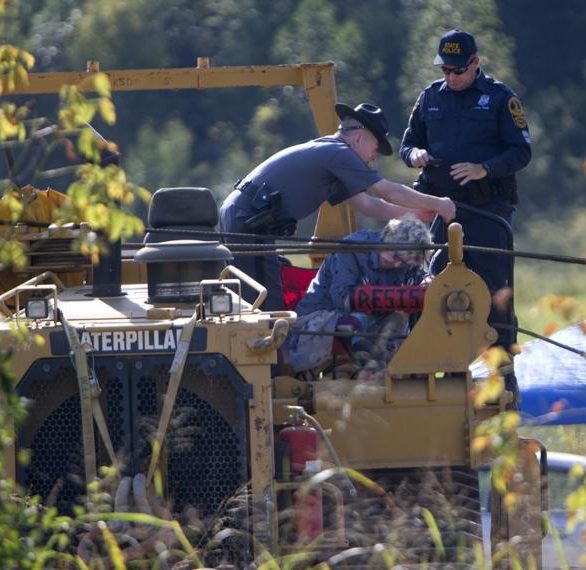 Roanoke County is objecting to a temporary workspace for the builders of a natural gas pipeline, saying its location at the top of Poor Mountain could be seen for miles.

Mountain Valley Pipeline has yet to make a formal request for the workspace, which would involve clearing about an acre of woods where Honeysuckle Road runs along a row of television and radio towers.

But tentative plans call for water tanks to be placed on the land for hydrostatic testing, which involves pumping large amounts of water through the 42-inch diameter pipe to check for leaks before it begins to transport natural gas.

Once the testing is completed, the area will be “revegetated to facilitate its return to pre-construction conditions,” Mountain Valley spokeswoman Natalie Cox said.

Based on the company’s interest in the land, outlined in documents filed with the Federal Energy Regulatory Commission, Roanoke County asked the commission in a letter Thursday to deny any request it may be asked to consider.

“The top of Poor Mountain is one of the most visible locations in Roanoke County,” Assistant County Administrator Richard Caywood wrote in the letter.

The county is concerned that the area for the temporary tanks is either in or next to the Coles-Terry Rural Historic District, a 2,500-acre tract that was designated for special treatment during planning for the 303-mile pipeline.

Mountain Valley is burying the pipe in trenches dug along a 125-foot right of way that stretches from northern West Virginia through Southwest Virginia, to connect with a pipeline near the North Carolina line.

Once the project is done, the cleared right of way will be reduced to 50 feet. But in the historic district, Mountain Valley agreed to maintain a 10-foot right of way to reduce the pipeline’s visual effects on the land.

The board of supervisors took a stand against the project in 2014, and Roanoke County officials have expressed concerns that the pipeline would cross very steep slopes and burrow through soils prone to erosion. Poor Mountain, which peaks at 3,928 feet above sea level, is the highest elevation along the 303-mile route.

It was not clear when — or whether — Mountain Valley will seek a variance from FERC to use the temporary workspace, nor was it clear Friday whether the company has already acquired the land.

But Mountain Valley evaluated the site and filed its possible plan with the agency earlier this month.

New construction has been halted temporarily along much of the pipeline’s route through Roanoke County. Mountain Valley suspended work on parts of the project Aug. 15, three days after environmental groups filed a legal challenge to a federal permit they say fails to protect endangered species along the pipeline’s route.

Should a temporary workspace on Poor Mountain be approved, “we would not engage in any ground-disturbing activity until all relevant outstanding issues are resolved,” Cox wrote in an email.

Assuming that Mountain Valley can overcome the legal challenge over endangered species — and reclaim two other permits suspended by a federal appeals court for environmental reasons — the pipeline is slated for completion by mid-2020.

But before Mountain Valley can start distributing natural gas to markets up and down the East Coast, the pipe would have to be tested by pumping large amounts of water at high pressure through segments of the line.

An estimated 58 million gallons of water would be needed for the entire project, according to an environmental impact statement filed with FERC. Almost all of the water in Virginia would be purchased from municipal sources.

After the testing is completed, the water would be discharged through sediment filters on vegetated land away from streams and wetlands, the environmental statement says.

Despite the voluntary suspension, some pipeline opponents say Mountain Valley is continuing work in areas populated by two endangered fish — the Roanoke logperch and the candy darter — as well as the Indiana bat and the northern long-eared bat.

Attorneys for the Sierra Club asked the 4th U.S. Circuit Court of Appeals to stay a permit from the federal Fish and Wildlife Service on Aug. 21. No decision had been made by Friday afternoon.

Also on Friday, a 75-year-old woman chained herself to a piece of construction equipment off U.S. 460 in Montgomery County. It was the latest attempt by protesters to block work on the project.

“The problem with pipelines is they always leak,” the woman said in a statement released by Appalachians Against Pipelines. “What they leak are toxins into the land, water, and air.”

Since work began in February 2018, more than 50 people have been arrested for sitting in trees, occupying other aerial blockades, chaining themselves to construction equipment and impeding work in other ways.

Cox said that while the company respects the views of opponents, it is concerned that the “actions taken by a few” are creating safety risks for everyone involved.

“Work on the Mountain Valley Pipeline project is more than 85 percent complete,” she said, “and we look forward to resolving outstanding issues and putting the pipeline into service next year so that it can meet demand for affordable natural gas across the region.”