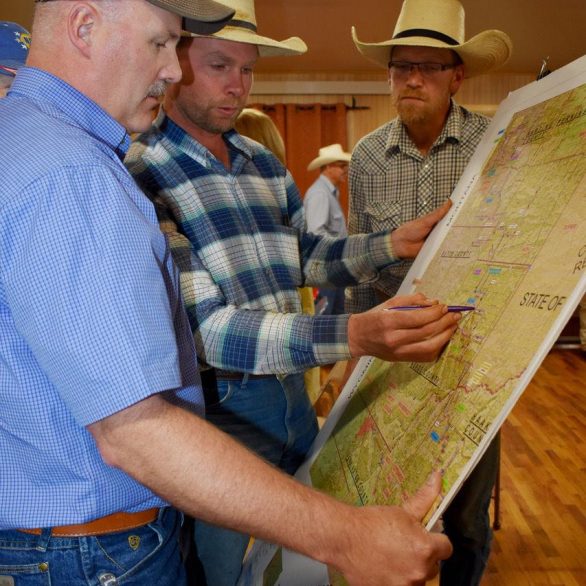 RED OWL, S.D. (AP) — The actual construction of the pipeline may be at a standstill, but preparations continue in Meade County if and when TC Energy greenlights the project.

TransCanada Corp., which changed its name in May to TC Energy, has lost the 2019 construction season pending a Nebraska Supreme Court decision related to the pipeline’s route and a lawsuit by two Native American communities in Montana, corporate officials said.

But the groundwork on gravel roads throughout Meade County continues in preparation for hundreds of truckloads of pipe and other products needed to build the pipeline.

Alan Lietz, project manager with TC Energy, spoke and answered questions of nearly 60 residents of central Meade County at the Red Owl Hall. His appearance was part of a special meeting of the Meade County Commission on June 19, the Black Hills Pioneer reported.

Lietz said TC Energy was hopeful that they would get a couple of the major permits that they needed, and hoped to be doing pipeline construction this summer, but that didn’t happen.

“Until we get those, it’s hard to give definitive plans about when we are going to do what,” he said.

Lietz said even though Keystone XL has been ongoing for 10 years, the company is still committed to the project.

“We still believe it makes sense,” he said.

But until TC Energy gets some of those other regulatory permits they won’t know when they will be doing the mainline construction.

“When we get those, we will be able to communicate more definitively back to you saying this is when we plan on doing this or such at a given time,” he said.

The work on gravel roads is something that TC Energy already had started last year and wants to finish, Lietz said.

Hal Fuglevand, general manager for the Yellowstone Division of Knife River Corporation, said his company will oversee the road work and will have a full-time superintendent on the Meade road projects as well as a project manager.

Work will begin the week of June 24 on Avance Road off Highway 34 in the far northeast corner of the county. The Keystone XL pipe yard will be located along that road.

The hauling and grading would continue for five or six days, and then it would be covered with mag chloride, a gravel road dust control agent.

The focus would then shift to Maurine and Opal roads in the far north central portions of Meade County which are near the Keystone XL pump station. That project would last about 15 days.

“Once we start, we will work continuously until we are done. We’re hoping for a July 22 completion if everything goes right,” Fuglevand said. “We hope to get out of your hair just as quick as we can.”

Work hours will be 7 a.m. to 6:30 p.m. daily. Crews will work Monday through Saturday, but will take off for the Fourth of July holiday July 4-7.

“The intent is not to travel on gravel roads as far as haul roads. We are going to stay on all paved roads except the roads we are working on,” Fuglevand said.

Knife River will have a crew of 25 trucks hauling during the projects.

And if there are delays, Knife River would most likely halt the hauling during the annual Sturgis Motorcycle Rally, said Meade County Commissioner Rod Bradley who moderated the meeting last week.

Rural residents expressed concerns about rock chips in their windshields and blown tires on their vehicles from the large aggregate that was brought in to cover the gravel roads.

“If something falls off one of our trucks and chips your windshield, we will pay for it,” Fuglevand said.

Residents also wanted assurances that they would not see a repeat of the fiasco when Brandenburg Drainage, a subcontractor on the Keystone XL project, filed 23 liens totaling $1.01 million against Meade County landowners in mid-March. The lien amounts ranged from $3,580.57 to $243,478.76 and have since been lifted.

“What are you as company officials going to do to prevent your contractors or subcontractors from doing that to us again?” asked Darrell Vig.

Lietz said that the company is being more proactive with contracts to assure there is not a repeat of the lien situation.

“You try to screen who you partner up with. This time we went with someone (Knife River) we know has performed well both in South Dakota and Montana. We have confidence that they will do a good job,” he said.