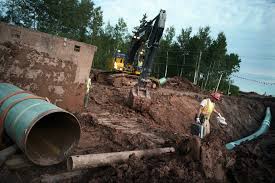 An administrative law judge said opponents of Enbridge’s proposed Line 3 oil pipeline did not prove construction of the project would harm northern Minnesota wetlands and streams.

In a non-binding recommendation issued Friday, Judge James LaFave said the coalition of environmental and tribal groups failed to meet the burden of proof in a contested-case hearing on the Minnesota Pollution Control Agency’s water permits over the summer and urged the MPCA commissioner to make the same finding when considering the 340-mile pipeline’s 401 certification, a permit awarded by a state’s regulators if the project’s impact on water falls within the state’s standard. The MPCA’s decision is due Nov. 14.

“The Joint Petitioners’ challenge brought additional transparency and insight to this important process,” LaFave wrote. “At the same time, agencies charged with scrutinizing the plans and proposals submitted by Enbridge are experts in their fields …The Joint Petitioners bear the burden of proving, by a preponderance of the evidence, that the facts forming the basis for the MPCA’s decisions in the five issues under consideration are erroneous. The Joint Petitioners have not met that burden.”

The report followed a contested-case hearing ordered by MPCA Commissioner Laura Bishop in June after more than 20 comments on a draft permit called for such a hearing, which put the issues in front of an administrative law judge to examine additional evidence and testimony and then make a recommendation to the agency.

In a statement, MPCA spokesperson Darin Broton said the contested-case hearing “was an important opportunity to ensure the recommended water crossing methods protected all impacted streams and wetlands” and that the judge’s findings would be considered in the agency’s decision.

Broton did not say whether it would issue, deny or waive its authority to issue the certification.

Friday’s recommendation was welcome news for Enbridge, which has completed and put into service 650 miles of Line 3 in Canada, 13 miles in Wisconsin and is “largely complete” with the 12-mile segment through the northeast corner of North Dakota, leaving only the Minnesota segment remaining.

Once complete, the pipeline will replace the existing, aging Line 3 and ferry 760,000 barrels of oil (31.92 million gallons) per day from Alberta, Canada, to Enbridge’s terminal in Superior, following a new route through much of northern Minnesota.