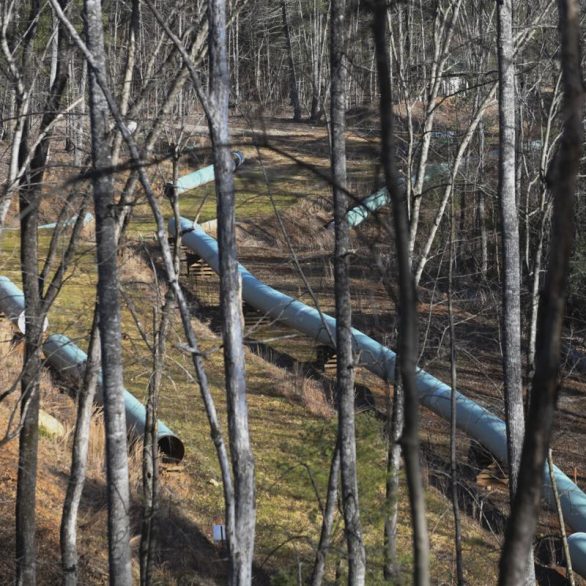 Work crews have been given clearance to stabilize sections of the unfinished Mountain Valley Pipeline that have been sitting in the Jefferson National Forest for the past four years.

The Federal Energy Regulatory Commission on Tuesday approved Mountain Valley’s proposal, which will use helicopters to fly in new wooden structures, known as cribbing, on which segments of the heavy pipe have been positioned.

As the pipeline’s completion has been delayed, some of the cribbing has deteriorated, allowing at least two sections of pipe to slip off of their supports and slide a short distance down the steep slopes of Brush and Sinking Creek mountains.

Crews will hike into the forest and reinforce the pipes’ supports without the use of heavy machinery. The stabilization plan was designed to prevent further erosion along a 125-foot wide right of way that has been cleared for the natural gas infrastructure.

In a news release Wednesday, the U.S. Forest Service said people near the pipeline’s route through public woodlands in Giles and Montgomery counties may soon notice increased activity in the area.

The work is expected to take several days, according to the Forest Service, and the pipeline corridor remains closed to the general public.

In addition to reinforcing the pipe’s cribbing, the stabilization plan focuses “on protecting soil and water resources and includes monitoring conditions, securing pipe sections on the surface, ensuring erosion control measures are functional or enhanced, prepping base soils, and seeding,” according to the Forest Service, which recommended the proposal.

In 2018, just a few months after construction began on the $6.6 billion project, a federal appeals court threw out a permit for the pipeline’s 3.5-mile route through the national forest, which also includes a small section of Monroe County, West Virginia.

That permit and others were reissued, only to be struck down a second time by the 4th U.S. Circuit Court of Appeals. The court cited environmental concerns that include muddy runoff from work sites along the pipeline’s 303-mile path, which takes it north of Blacksburg and south of Roanoke.

Construction is currently stalled — except for erosion and sedimentation control work — while Mountain Valley seeks a new round of permits.

In comments submitted to FERC, some pipeline opponents have raised concerns about the integrity of the pipe, saying its protective coating has been weakened by years of exposure to the sun and other elements.

Mountain Valley says it checks each segment of the 42-inch diameter pipe for flaws before it is buried in a trench, and so far all of the sections have met specifications.

About 84% of the pipe has been lowered into trenches and covered with dirt, the company says. FERC recently extended the deadline for completion of the project to 2026, but Mountain Valley says it hopes to get new authorizations to finish work and put the pipeline in service by late next year.