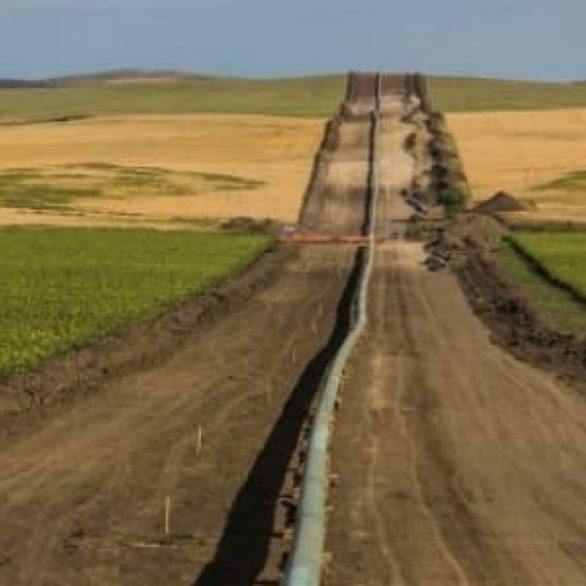 State officials painted a gloomy picture for oil Tuesday in the wake of a judge’s order to temporarily shut down the Dakota Access Pipeline, saying it could lower the value of Bakken crude and cause some in the oil industry to flee North Dakota.

Gov. Doug Burgum called the recent oil downturn amid the coronavirus pandemic an already “tenuous situation” and suggested that a further hit to the price of Bakken crude would end up “pushing a bunch of production right now in North Dakota out of economic value,” resulting in even more idled wells.

“That’s a tipping point, which actually could really cripple production in North Dakota,” he said during a meeting of the Industrial Commission, a three-member panel that he chairs.

A lack of demand for oil during the pandemic has pushed down prices. West Texas Intermediate, the U.S. crude pricing benchmark, was trading for around $40 per barrel Tuesday.

Bakken oil is priced below that, by roughly $8 per barrel, due to its remote location, said Justin Kringstad, director of the North Dakota Pipeline Authority. Oil from North Dakota must be transported farther to get to a refinery or an ocean shipping port than oil from a location such as Texas, so it incurs greater shipping costs.

Kringstad told the commission to expect an additional $5-per-barrel hit on top of that, as the disruption from a shutdown Dakota Access would “depress the entire market” in the Bakken.

The ruling comes four years after the Standing Rock Sioux Tribe first sued over the pipeline, which crosses under the Missouri River just north of the reservation. Tribal members worry a potential spill from the line could contaminate the water, which they use for drinking, fishing and religious practices.

Energy Transfer has vowed to appeal the decision to a higher court. Boasberg on Tuesday nixed the company’s initial attempt to put the ruling on hold. The judge is imminently expected to set deadlines for the company and the tribe to file arguments as to whether the line should shut down during the appeal process.

Energy Transfer says it will take longer than Aug. 5 to empty the pipeline. Kringstad said Tuesday that oil moves through the 1,200-mile Dakota Access at the pace “of a brisk walk,” and that a complete shutdown could potentially take months.

Dakota Access has been in operation for three years, carrying as much as 570,000 barrels per day of oil from North Dakota to Illinois. That accounted for about 40% of North Dakota’s daily oil output before the pandemic hit and production fell.

Kringstad said he anticipates a shutdown would force more oil to be hauled out of state by trains, leading to transportation expenses at least several dollars per barrel more than the cost of shipping oil through Dakota Access. Shipping a barrel of oil through the pipeline ranges from about $6 to $8, depending on contract terms, according to figures provided by Kringstad.

Officials worry the impacts on pricing could lead to an exodus from the Bakken as the oil industry opts to focus on places such as the Permian Basin of Texas and New Mexico, one of the North Dakota oil patch’s biggest competitors.

“Operators are going to shift their capital to other places where this limitation doesn’t exist, or this risk doesn’t exist, and that shift could become permanent,” State Mineral Resources Director Lynn Helms told the commission.

Kringstad envisioned that oil will be diverted onto other pipelines if Dakota Access shuts down, as there is space on “just about every pipeline system in the region” given the recent downturn.

But those pipelines will reach capacity, and the oil industry will need to resort to rail transportation, he said.

“The challenge is going to be getting the crews, the engines and the tank cars back into the region in order to meet this growth going forward,” he said.

He predicted it will take a month or two to ramp up rail capacity. He said the state has 11 existing loading facilities that can already accommodate more oil.

Trains used to haul more than 800,000 barrels per day of Bakken crude before Dakota Access came online. Oil rail shipments, however, have faced criticism amid several high-profile fiery derailments, including one in 2013 that killed 47 people in Quebec.

BNSF Railway spokeswoman Courtney Wallace said in an email to the Tribune that, “As always, we’re prepared to safely and efficiently move all shipments.”

The railroad transports the bulk of Bakken oil hauled by train.

“We’ve invested heavily in our railroad in North Dakota, which ensures we have the capacity today for our customers and that we’re well positioned to grow with them into the future,” Wallace said. “Our investments have enabled us to enhance our safety and efficiency, to move all-time records of agricultural commodities in recent years, and to be ready for all other potential market opportunities.”

The North Dakota attorney general’s office, meanwhile, is gearing up to convey the state’s concerns about a pipeline shutdown to the court to help Energy Transfer’s appeal.

The state submitted a brief this spring outlining the potential economic impact on the state to try to convince the judge to allow the pipeline to keep operating while the environmental study is completed. Standing Rock and other Sioux tribes involved in the lawsuit responded in a court filing at the time, contending that pipeline supporters overstated any potential disruption if the pipeline were to shut down.

Burgum said Tuesday that “it’s imperative” the state “not just casually, but accurately and in the most fulfilling way possible describe for the courts this devastating economic impact.”

Following the ruling, he heard from the oil industry that some companies were entertaining the idea of restarting more widespread operations in the Bakken after pulling back during the downturn. Companies were thinking of bringing in more drilling rigs and bringing back workers as oil prices began to slowly climb, he said.

“This ruling comes, and all those conversations are off right now,” Burgum said. “This is a significant setback. We need to again really crunch our numbers and tell our story in a way that it’s understood.”