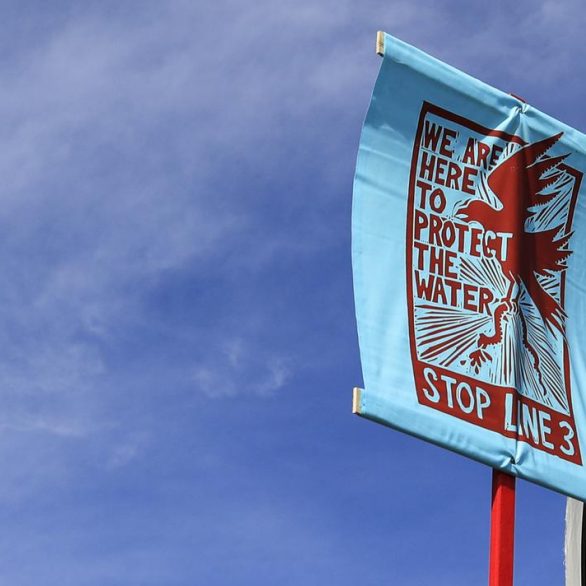 ST. PAUL — State regulators on Tuesday, Oct. 1, voted to send an environmental impact statement for a crude oil pipeline in northern Minnesota back to the Department of Commerce for revision, likely allowing the project to move forward.

The Minnesota Public Utilities Commission on a unanimous voice vote requested that the state Department of Commerce’s Energy Environmental Review and Analysis Unit revise the assessment of the Enbridge Line 3 pipeline project to include the impact an oil spill could have on the Lake Superior watershed. The decision came after a 10-minute hearing.

The Department will have 60 days to report back to the commission, per the court order, and there will be a public comment period to follow. And the commission’s decision knocks loose the project’s environmental impact statement, which had been tied up in the courts following appeals from tribal and environmental groups.

Supporters of the pipeline project on Tuesday said the decision would help the project move forward, setting up a safer mechanism for transporting oil than Enbridge’s existing 50-year-old Line 3 and creating jobs across northern Minnesota. Opponents, meanwhile, said the move was overly hasty and didn’t take into consideration the impact the pipeline could have on rivers and watersheds it would cross, nor did it adequately consider the impact to tribal lands.

Both supporters and opponents of the pipeline project packed the hearing room on Tuesday, wearing sweatshirts and hats that voiced their opinions about the project. The proposed $2.6 billion replacement pipeline will carry 760,000 barrels of oil per day from Alberta to the Enbridge terminal in Superior, Wis.

“The PUC made the right decision to put the process for final approval of this needed pipeline replacement project back on track,” Dan Olson, LIUNA Local 1091 Business Manager, said in a news release. “Thousands of our members live and work in Northern Minnesota where the work will take place, and they recognize that building a safer and more reliable pipeline is the best way to protect our environment and boost our economy.”

The Minnesota Court of Appeals in June ruled the environmental review of the proposed pipeline project was “inadequate” because it did not consider the effects of an oil spill in Lake Superior’s watershed. Other aspects of the plan had been disputed but the court ruled that they could stand.

Tribal and environmental groups questioned those aspects of the environmental impact statement, including the pipeline’s impact on tribal resources, and asked the Minnesota Supreme Court to review it. The court last month denied the request to take up the case, sending the proposal back to the PUC for review.

State regulators’ decision could also help Enbridge update other applications for environmental permits for the project. The Minnesota Pollution Control Agency on Friday, Sept. 27 issued a “denial without prejudice” for the proposed 340-mile long pipeline’s 401 certification, a permit awarded by a state’s regulators if the project’s impact on waterfalls within the state’s standards. Federal agencies cannot issue a federal permit or license without a state approving the 401 certification.

The agency said it needs more information in three areas: “oil spill response modeling in the Lake Superior Watershed, a pre- and post-construction monitoring plan for aquatic resources, and a revised proposal for mitigating more than 400 acres of forested wetlands that will be impacted during construction.”

Lorraine Little, director of community engagement for Enbridge, said the commission’s decision would allow the Department of Commerce to revise the “narrow” issue highlighted by the Court of Appeals in the project’s 13,000-page environmental impact statement. Little didn’t immediately have a timeline for the construction project.

“Today was important in addressing the one issue that the court of appeals found with the environmental impact statement,” Little said. “The court of appeals decision in June was really only focused on that one narrow issue, which is to add the spill modeling in the Lake Superior watershed.”

An attorney for Honor the Earth and the Sierra Club said the path forward for the pipeline construction would likely take months, if not longer, as other parts of the permitting process play out. He also said the groups would continue to bring appeals in those other phases of project consideration.