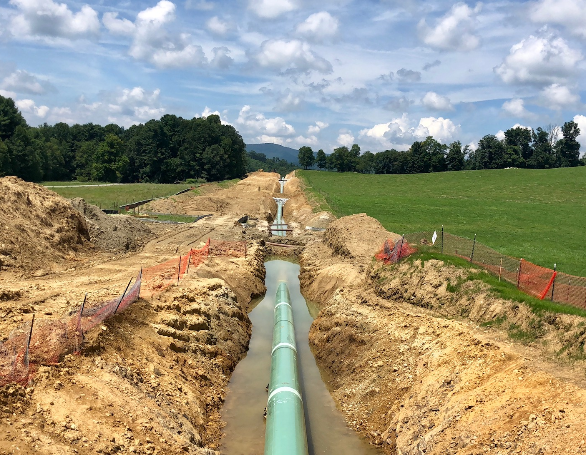 Potential new business for Roanoke Gas Co. is not strong enough to support investment by its sister company in the Mountain Valley Pipeline, an analysis by state regulators has found.

In more than 500 pages of documents filed Friday, the State Corporation Commission questioned the company’s assertion that it needs more natural gas from the pipeline, which has generated intense controversy since it was proposed five years ago.

The SCC’s report was made as it considers a proposed rate increase by Roanoke Gas.

Drillinginfo, a consultant for the SCC, “found that there is little evidence to support that load is growing at the rate reported by RGC,” John Stevens, deputy director in the agency’s division of public utility regulation, said in written testimony.

“As such, Drillinginfo sees no immediate need to expand the size of the natural gas supply portfolio,” he stated.

Roanoke Gas is a subsidiary of RGC Resources. Another subsidiary of the company, RGC Midstream, is a 1% partner in the Mountain Valley Pipeline, a $5 billion project that its partners say will provide a needed supply of gas to the Mid-Atlantic and Southeastern regions of the country.

But in written comments filed with the SCC, and at a news conference last week, critics have said Roanoke Gas already has an adequate supply from the Columbia Gas and East Tennessee pipelines. Tapping into Mountain Valley will lead to higher rates, they say.

“I don’t think the customers should be the safety net” for a risky investment in the disputed pipeline, Roanoke attorney John Fishwick said at the news conference last week.

The SCC’s questions about the need for more gas are not likely to impact the overall project. The Federal Energy Regulatory Commission determined there was a public need when it approved the 303-mile pipeline in 2017.

But the analysis could affect, to some degree, Roanoke Gas’ request for a rate increase. A SCC hearing examiner will take testimony on that matter Aug. 14.

Paul Nester, president of the company, said that both the Columbia and East Tennessee pipelines are at full capacity during the winter, requiring Roanoke Gas to use a reserve supply of liquefied natural gas to serve its customers on the coldest days.

“The economic development success in the Roanoke Valley and the increased natural gas usage in our service territory necessitates additional natural gas supply,” Nester said in an email last week. “The MVP will provide that needed supply.”

The company’s application for a nearly 11% rate increase for residential customers includes funding for two taps to Mountain Valley, at the Summit View business park in Franklin County and in the Lafayette area of Montgomery County.

The two pipeline taps — which represent the only local use of gas to be shipped by the private venture — are the only items connected to the controversial project that are included in the proposed rate increase.

Roanoke Gas has said its involvement in the pipeline will not lead to higher rates for customers. But if it did, those costs would have to be recovered through a separate gas cost increase.

The company has said that its proposed base rate increase, the first since 2013, is needed to recover costs associated with ongoing infrastructure investment programs, increases in operations and maintenance expenses, and a new utility plant.

Roanoke Gas will have an opportunity to respond in writing to the SCC’s analysis before the Aug. 14 hearing. The company plans to refute the gas supply analysis performed by Drillinginfo, Nester said.

Bernadette Johnson, a vice president of the Austin, Texas, consulting company, found Roanoke Gas’ growth rate to be about 1.2% — much lower than the company’s calculation of 9.8% since 2015.

If the commission determines there is a need for additional capacity, Roanoke Gas should explain any efforts it has made to get additional gas from its two existing pipelines, Johnson said in her testimony.

“If all possibilities have been exhausted … the MVP would be the logical choice to provide this additional service,” she said in written documents filed with the SCC.

In general, energy use has stabilized even as population and economic activity have grown, Thomas Hadwin, a former electric and gas utility executive, said in written comments that were included among several dozen submitted to the SCC by members of the public. Utility companies are faced with both level revenues and higher demands from shareholders, he said, which leads to their involvement in projects like Mountain Valley.

“It is unfair to ask the company’s customers to shoulder the costs of RGC Resources’ speculative venture when it is far from certain that those costs have any value to the customers,” Hadwin wrote.

Since work on the interstate pipeline began last year, Mountain Valley has run into repeated problems controlling erosion and sedimentation. It has been cited by environmental regulators in Virginia and West Virginia.

Overall, the SCC staff recommendation is for a gross rate increase of $6.4 million. In an application filed last year, Roanoke Gas had sought an additional $10.5 million a year.

While the company disagrees with many of the staff findings, it is pleased that the recommended increase “is within range of the company’s estimated award” once revenue from a rider for modernized infrastructure is accounted for, Nester said.

The SCC allowed the proposed rate increase to take effect on an interim basis in January. If the agency’s final approval is for a lesser amount, customers would receive a refund with interest. A final decision is not expected until after the Aug. 14 hearing.