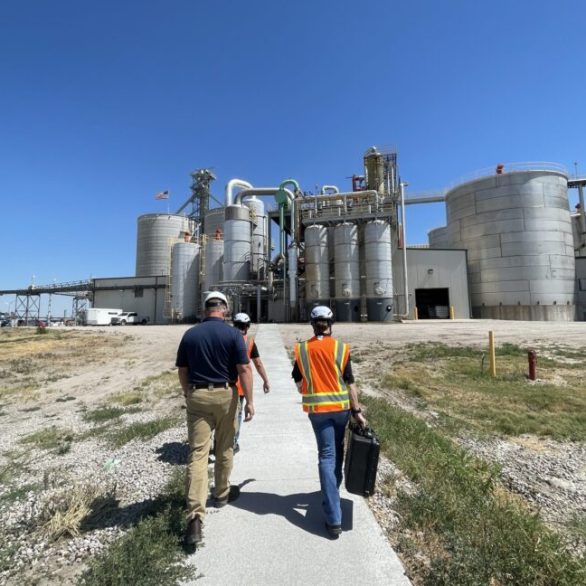 LINCOLN — The state’s first commercial carbon capture and storage project will be associated with an ethanol plant in Bridgeport.

On Tuesday, Carbon America announced an agreement with Bridgeport Ethanol LLC to capture carbon from the ethanol process and store it underground near the plant in Nebraska’s Panhandle.

The project is expected to capture approximately 175,000 tons of carbon dioxide per year or about 95% of the total emissions from the ethanol facility’s fermentation process.

The carbon captured from the Bridgeport plant is equivalent to taking more than 38,000 vehicles off the road, according to Brent Lewis, CEO and co-founder of Carbon America, which is based in Arvada, Colo.

At least two companies are bidding to build pipelines across Nebraska linking ethanol plants and other manufacturing operations with deep, underground geologic formations in Illinois and North Dakota.

Advocates for corn-based ethanol maintain that to remain competitive, ethanol needs to reduce its carbon footprint, which will make the fuel more attractive to more states. Nebraska is the nation’s second-largest producer of ethanol, and its plants serve to increase the price of corn and provide a valuable livestock feed as a byproduct.

Environmentalists, meanwhile, question whether such carbon storage is a proven technology and raise concerns about high-pressure pipelines crossing the state without proper regulation.

Carbon America has reached agreements with two other ethanol plants this year to finance, build, own and operate carbon storage systems.

A spokeswoman for the company said the exact cost of the Bridgeport project is not being released. A company official said the project will be eligible for federal tax credits for such projects.

In Bridgeport, Carbon America will install carbon capture equipment that will extract CO₂ and transfer the gas via a pipeline to an underground geologic sequestration site within 20 miles of the plant.

Dave Kramer, president and founding member of Bridgeport Ethanol, said that carbon capture and storage is vital because it will increase the value of Bridgeport ethanol in the marketplace.

According to a recent University of Nebraska-Lincoln study, ethanol has an overall economic impact on the state of $4.5 billion.

“The economic development created by ethanol production creates jobs in rural Nebraska and is a primary driver to growing Nebraska,” said Tony Goins, the director of the State Department of Economic Development.

Carbon America expects the first injection to begin in 2024.