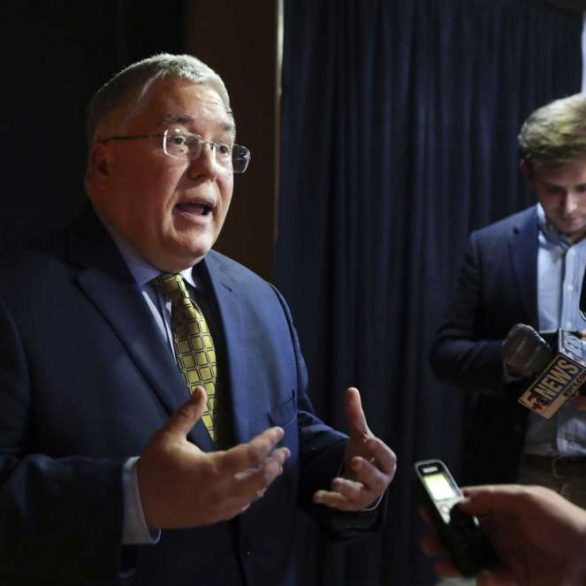 CHARLESTON, W.Va. (AP) — Attorneys general from 18 states are urging the U.S. Supreme Court to allow construction of the Atlantic Coast Pipeline to continue.

West Virginia Attorney General Patrick Morrisey said his office will lead the coalition. A friend of the court brief scheduled to be filed Monday argues that the 4th U.S. Circuit Court of Appeals in Richmond, Virginia, erred when it ruled last December that the U.S. Forest Service lacked authority to grant the pipeline rights of way across the Appalachian Trail and through the George Washington and Monongahela National Forests.

The U.S. Supreme Court said in October that it would hear appeals filed by energy companies that want to build the 605-mile (975-kilometer) pipeline and by the Trump administration, which initially approved the project.

The pipeline was proposed in 2014 by Dominion Energy, Duke Energy and other energy companies. It would originate in West Virginia and run through parts of Virginia and North Carolina.

Under plans for the project, a 0.1-mile (0.16-kilometer) segment of the pipeline would cross more than 600 feet (180 meters) beneath the Appalachian Trail. In West Virginia, the pipeline would transport natural gas through Harrison, Lewis, Upshur, Randolph and Pocahontas counties.

The project has been mired in legal challenges by environmental and conservation groups. Construction has been halted since December.

A statement from Morrisey’s office said the halt in pipeline construction has cost West Virginia jobs and lost revenue from income and property taxes.

“The appeal court’s decision has devastating effects for West Virginia,” Morrisey said. “We appreciate the Supreme Court’s review and believe a decision to overturn the prior ruling will end unnecessary delays that have halted pipeline construction, kept heating fuel prices high, negatively impacted struggling working-class families and been detrimental to the services they receive.”

Morrisey said that if the ruling is left intact, the Appalachian Trail would become off limits to energy development and so, too, would thousands of miles of federal trails if the decision is applied nationwide.