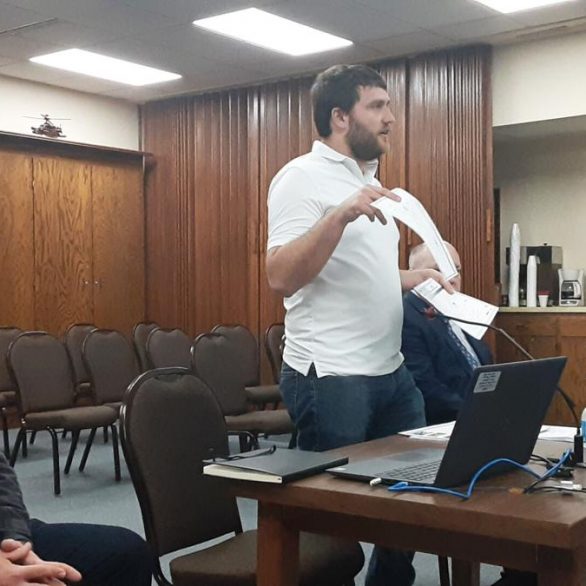 A carbon capture pipeline coming to Hall County has begun the land acquisition process in Iowa and soon will start in Nebraska.

The enterprise launched in 2021.

Alex Lange, Summit engineering supervisor, explained the project on Tuesday to the Hall County Board of Commissioners.

“The goal of the project is to aggregate roughly 8.8 million tons of CO-2 from 31 ethanol plants throughout our five-state region,” Lange said.

The project will capture carbon dioxide emissions that otherwise would be emitted into the atmosphere, compress the captured gas, and transport it through a pipeline to North Dakota, where it will be permanently stored underground in a deep geologic site.

Hall County is one of 14 counties the underground pipeline is planned to traverse. It is expected to then run east through Hamilton, Merrick, and York counties.

“The pipe will range anywhere from four-inch up to 24-inch. In Hall County, we’re looking at a six-inch pipeline right now,” Lange said.

The project aims to enable ethanol to produce more sustainable, long-term fuel that can be used by markets that are looking for a low-carbon solution to their fuel needs.

Local ethanol refineries will benefit from the project.

“In Nebraska, we’ve got six ethanol plants we’re partnered with. Four of those are Green Plains plants,” Lange said. “One of those is here in Hall County, in Wood River.”

He added, “Overall we have 20 total partner companies signed on to the project, representing those 31 ethanol plants.”

A key element of the project is 50-foot wide rights-of-way being pursued for the pipeline.

Summit has been pursuing land rights in Nebraska for the last three weeks, said Lange.

Compensation is being done on a “per-county basis.”

“We came up with what we assumed is fair-market value for every landowner and tacked on an additional 15% onto that for our initial offer,” he said. “Our initial offer also includes crop damages. If it’s agricultural land, first year at 100%, second year at 80%, and third year at 60%.”

Lange emphasized that the pipeline is intended for carbon dioxide alone, and no other substances, and there are no plans to run other pipes in the easements.

“The easement language explicitly states this is for carbon dioxide only,” he said. “We can never go back and move ethanol or move oil without renegotiating that easement agreement with every single landowner.”

Commissioner Gary Quandt worried the project would be like the Keystone XL Pipeline, which was abandoned after its permit was revoked.

Lange said most landowners prefer to have the pipeline left alone if it’s shutdown, so that the land is not disturbed twice.