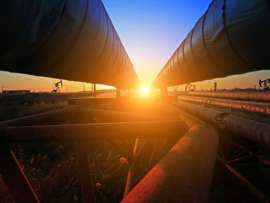 Waste Not, Want Not: How A Proposed Natural Gas Pipeline Could Be A Boon for Industry

ND is losing out on business opportunities to other states who rely on ND oil, but have the pre-existing pipeline infrastructure to utilize more of ND’s oil.

The North Dakota legislature is proposing to put a significant amount of ARPA dollars toward the construction of a large natural gas pipeline from the Bakken, across the northern tier to Grand Forks, and down to Fargo. House and Senate Appropriations Committee met last week to recommend an initial $150 million contribution to be considered by the full legislature during the special session starting November 8th.

For this week’s Ag and Energy Insight we look at how the proposed west-to-east natural gas pipeline could impact the state.

“Gas/oil ratio is relentless, regardless of what’s happening with prices, even production levels,” explained Kringstad.

Gas/Oil ratio is the volume of gas that comes when oil is pressured to the surface. It is usual for oil drilling to produce natural gas.

“The way the reservoir reacts to pressure change over time doesn’t change depending on what’s going on up here on the surface, so this is continuing to go up. The current model showing it to continue to rise,” explained Kringstad.

Kringstad says by 2023, North Dakota will produce more natural gas than it can move if there is no expansion of pipeline. An added obstacle: producers can no longer flare excess gas due to a stricter regulatory environment.

“Something is going to have to give and it’s oil production in the state, again going back to that understanding that the producers are not going to be flaring like they would have potentially done five years ago, they may have looked at this challenge and said well we’ll just increase flaring. that is not on the table anymore and really in this equation, crude oil production would suffer,” said Kringstad.

The Bakken’s two major export pipelines, Northern Border and Alliance, go through Minnesota, Iowa, and to the Chicago market. ND Economic Development and Finance Director Josh Teigen explains that because Iowa has a greater existing pipeline infrastructure, the state holds a competitive advantage over ND.

“The state’s that we’re competing against for that exact same project for example, those other states, are using North Dakota gas to compete against us for a project that we can’t land because we don’t have enough of our own gas to fuel it, but another state does, and that’s I think that’s the hardest piece to swallow,” explained Teigen.

Kringstad says until there is pipeline expansion from east to west, companies are going to continue locating elsewhere.

“We’ve seen struggle for industrial applications in North Dakota and commercial users because they can simply just over compete in some of these other markets that North Dakota sends its gas, and the distance and the fact that you need new pipe to get over here to the east has made that cost-prohibitive,” explained Kringstad.

WDEA panelists discussed how the proposed pipeline would not only draw in new industry and value-added Ag projects to central & eastern parts of the state, it would also bolster a myriad of natural gas projects in the west.