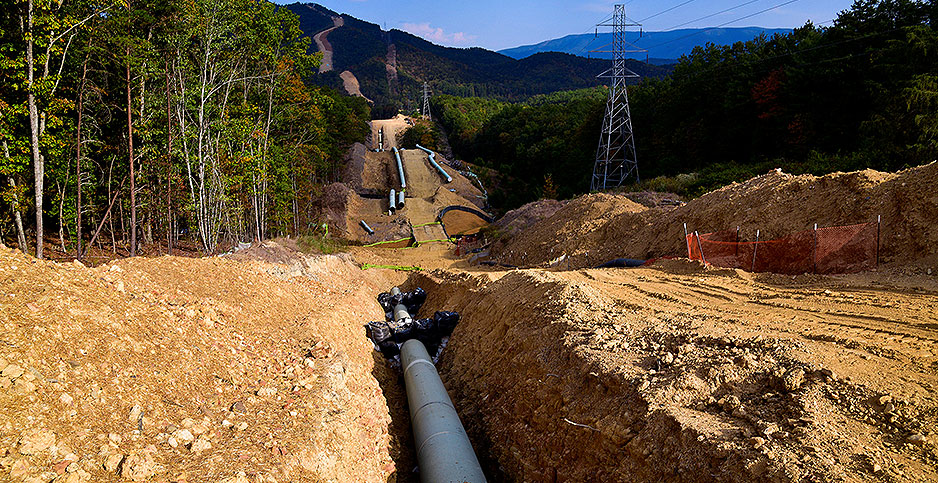 The Mountain Valley Pipeline faces a consequential summer. So do the streams and wetlands that the pipeline’s developers are seeking permission to cross.

The U.S. Army Corps of Engineers will decide by July 2 whether to grant or deny additional time to West Virginia and Virginia environmental regulators to consider water permit requests from the joint venture that owns the pipeline, according to Corps Huntington District spokesman Brian Maka.

Mountain Valley Pipeline LLC, the joint venture that owns the pipeline, still has applications pending with West Virginia and Virginia state environmental regulators for about 300 water crossings while it seeks approval from the Federal Energy Regulatory Commission to tunnel under 120 additional waterbodies.

Both departments previously said that they hadn’t heard back from the Corps.

Pipeline developers have proposed a 125-foot-wide temporary right-of-way to construct the pipeline and a 50-foot-wide permanent right-of-way to maintain and operate the pipeline once in service. Mountain Valley anticipates that the project will have temporary effects on more than 21,000 linear feet of streams and 10 acres of wetlands in West Virginia during the construction phase.

The pipeline already has had adverse impacts on West Virginia’s waters. State environmental regulators proposed a consent order earlier this year requiring Mountain Valley to pay a $303,000 fine for violating permits by failing to control erosion and sediment-laden water.

That penalty followed a $266,000 fine from the same regulators in 2019 for similar erosion and water contamination issues. The Virginia Department of Environmental Quality fined Mountain Valley $2.15 million that same year for water quality violations.

“Based on what I’ve seen thus far, I don’t know how they can permit this activity knowing that there are going to be additional impacts to water resources because of MVP’s track record,” West Virginia Rivers Coalition staff scientist Autumn Crowe said.

The North Carolina Department of Environmental Quality reissued a denial of a water quality permit for the planned Southgate extension of the project in April.

The Rivers Coalition has staunchly opposed the Mountain Valley Pipeline, joining legal challenges against it. The nonprofit has argued that the planned disturbance of wetlands would permanently alter the soil and hydrology of affected wetlands and that the buried pipeline within streambeds would create an increased risk during flooding.

The group also has contended that the 42-inch-diameter pipeline would degrade the aesthetics of the Appalachian Trail on Peters Mountain and the Greenbrier, Gauley and Elk rivers that the pipeline is designed to run through.

Asked about the Rivers Coalition’s arguments, Natalie Cox, spokeswoman for Equitrans Midstream, the Canonsburg, Pennsylvania-based lead developer of the project, argued that the claims placed specific policy agendas above that of environmental protection.

“Mountain Valley welcomes the opportunity to work with all stakeholders to address environmental protection concerns and ensure that best practices are implemented,” Cox said.

Cox noted that Mountain Valley is seeking individual water permits after legal challenges from environmental groups prompted it to abandon a blanket water permit issued by the Corps.

The Rivers Coalition and other project opponents have said the pipeline’s greenhouse gas emissions make it a bad idea, especially given the International Energy Agency’s call last month for no new investments in fossil fuels.

The DEP imposed a special condition, as part of its 2017 certification of water permit approval for the pipeline, stipulating that individual water quality certification is required for pipelines equal to or greater than 36 inches in diameter or pipelines that cross a river regulated by the federal Rivers and Harbors Act of 1899. The Mountain Valley Pipeline is greater than 36 inches in diameter and is designed to run through three such rivers: the Elk, the Gauley and the Greenbrier.

In 2019, the department revised the special condition to require individual water quality certifications for pipelines greater than 36 inches in diameter or crossing a river regulated by the Rivers and Harbors Act only if the department secretary believes the requirement should be in place.

The department later purported to waive its requirement that the pipeline obtain an individual water quality certification, but the 4th U.S. Circuit Court of Appeals ruled that the department had to engage in proper notice and comment procedures before it could waive the requirement and threw out verification of a water permit from the Huntington District of the Corps of Engineers for that reason.

Last year, the department stated it would not require an individual water quality certification for the pipeline and requested that the Corps incorporate the modification into its water permitting for West Virginia.

“The WVDEP will consider whether the components of the activity, resulting in a discharge to waters and contemplated by the federal [Corps] permit and Federal Energy Regulatory Commission license, will comply with the state’s water quality requirements and what conditions may be necessary to ensure that compliance,” acting department spokesman Terry Fletcher said in an email.

Equitrans Midstream’s targeted summer 2022 in-service date for the project is based on receiving all water crossing approvals and the lifting of a remaining exclusion zone around the Jefferson National Forest by the end of 2021.

The $6.2 billion project was originally scheduled for completion by the end of 2018 at a cost of just $3.5 billion.