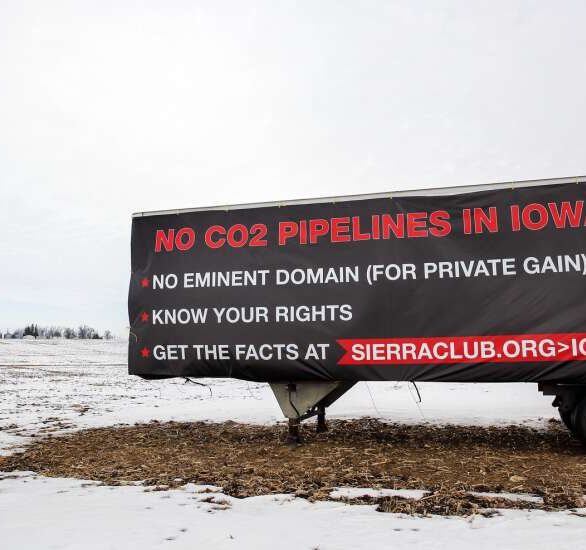 We need a pipeline to pump courage into the Statehouse

Iowa lawmakers are poised to kick the debate over carbon pipelines down the road, and past the November election. Maybe we need a pipeline to pump some political courage into the Golden Dome of Wisdom.

As you may have heard, three planned pipeline projects would pump carbon spewed by ethanol production into underground storage. The main goal of the multibillion-dollar projects is to toss an economic lifeline to the biofuels industry by making its products more environmentally attractive in an energy market increasingly looking to cut carbon emissions warming the planet.

First out of the chute is a 2,000-mile pipeline project proposed by Summit Carbon Solutions, sending liquid carbon from ethanol plants in Iowa to North Dakota for underground storage. Summit has told state regulators it wants to use eminent domain to take land for the projects from landowners unwilling to agree to voluntary easements.

Ethanol interests are powerful in Iowa. But so is the impulse to protect property rights. The collision of these two priorities has created a political minefield, particularly for Republicans who are watching rural constituents agitate against the use of eminent domain. Rural opponents, their local elected officials, and environmental advocates have fallen into an unusual coalition to fight the projects.

“We don’t always see eye-to-eye. But we do on this,” said Carolyn Raffensperger, an environmental lawyer and executive director of the Science & Environmental Health Network, at a recent Statehouse hearing. She called carbon pipelines a “sewer system for the fossil fuel industry.”

“I think the process is flawed, that’s why I’m here,” said Steve Kenkel, a Republican county supervisor from Shelby County. He contends local governments and their constituents have been left on the sidelines during the process, although the county will be expected to take on numerous new obligations if the Summit pipeline is built.

“Folks, this doesn’t pass the stink test,” Kenkel said at the hearing.

Earlier this legislative session, a Republican-sponsored bill that would have prohibited the use of eminent domain for private projects was pulled from a committee agenda before it could be debated. But state Rep. Bobby Kaufmann, R-Wilton, managed to pass an amendment to a larger budget bill placing an 11-month moratorium on the pipeline approval process.

Under the amendment, a required public hearing on the Summit project, or other pipeline plans, would be delayed until February 2023.

The pause is better than nothing. But it also hands lawmakers a get-out-of-trouble-free card through the 2022 election. So, welcome, but hardly brave.

The measure has yet to be debated by the Senate. But it’s pretty likely senators also will see the value of turning down the volume until the coast is clear.

So other than putting the election in the rearview mirror, what will change by February? Not much.

Opponents are unlikely to stand down. They make a compelling argument that eminent domain, a power intended for projects that are a public necessity, was never intended to grab land for a for-profit venture. They point to billions of dollars in federal tax credits carbon pipeline projects are set to receive and say the dollars could be better spent on proven efforts to fight climate change. They contend that a pipeline break could be a disaster for nearby residents. They’re skeptical of promises that the sequestered carbon won’t be used for oil extraction.

There’s also the small matter of how the intensive row-crop agriculture needed to fill ethanol demand is contaminating Iowa’s waterways. And how long can we keep pumping public resources into the 40-year effort to prop up biofuels?

The Summit venture is led by Republican Bruce Rastetter. Since 2017, Rastetter has donated more than $285,000 to various Republican campaigns and committees, according to state disclosure records.

How much will Rastetter pour into Republican campaigns in 2022? Sky’s the limit, especially on one of his donated flights.

Joining Rastetter in pushing for the Summit pipelines is former governor and U.S. ambassador to China Terry Branstad, former Branstad aide and Reynolds chief of staff Jake Ketzner, and Jess Vilsack, son of the former governor and current U.S. Secretary of Agriculture Tom Vilsack. Many Democrats, too, have pledged their allegiance to ethanol.

Two of three members of the Iowa Utilities Board, which will make the ultimate decision on whether eminent domain can be used for the pipelines, were first appointed by Branstad.

Then there’s Summit’s investors. The Des Moines Register reported this week that hundreds of investors are banking on the pipeline, 60 percent are from Iowa. The list includes Deere & Company, farmers, ethanol interests and business owners.

These are not folks used to giving up what they want.

Reynolds has played it coy. In her Condition of the State speech, she called for investments in “carbon capture solutions.” But her spokesman told the Register the governor is not advocating state incentives for pipeline projects.

But at a campaign stop in Sioux City in March, Reynolds was asked about Northwest Iowans’ concerns about the use of eminent domain. She seemed to suggest current landowner protections are adequate.

“We worked really hard to get significant language into Iowa code to make sure that we were protecting our farmers that there was a process in place where that they were not only protected but they were adequately reimbursed if for some reason, you know, we had to use eminent domain,” Reynolds said, according to KTIV.

She expressed a willingness to meet with concerned landowners. But her office declined to meet with landowners and members of the Sierra Club, insisting it wouldn’t fit into her schedule.

So it’s hard to see how these power dynamics change during an 11-month moratorium. It’s mostly political cover. The smart money is ethanol triumphant, again. Property rights be damned.

On a related note, the political courage pipeline has been delayed indefinitely.