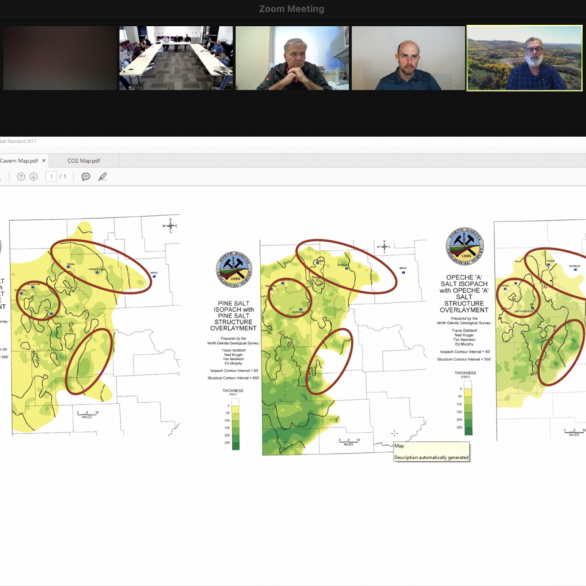 North Dakota has been missing out on large value-added agriculture projects to other states like Iowa, because that state can more efficiently and effectively deliver North Dakota gas to the projects.

That’s a big driver behind a recent proposal to use $150 to $350 million of American Rescue Act funds to help lower the costs of building a pipeline that can carry residual natural gas from west to east.

This would help not just the east, but also the state’s constrained middle, which has also lost major value-added ag projects over the past decade because they did not have the infrastructure to deliver the natural gas. The projects have flowed instead to places where that infrastructure already exists — even though in some cases the natural gas that fed into those projects was ultimately from North Dakota.

“That’s I think the hardest piece to swallow for me, is when we lose projects to other states because they have North Dakota gas that we can’t supply to ourselves first,” North Dakota Department of Commerce Economic Development and Finance Director Josh Teigen said.

North Dakota also has a lot more natural gas that will be coming out of the Basin in the future that will need a home. Based on projections by North Dakota Pipeline Authority Justin Kringstad, the state needs a solution for an additional billion cubic feet of natural gas per day, and state officials are hoping to leverage that for value-added ag and energy projects inside of North Dakota, instead of outside.

But there are some questions from the West about the proposal

“Nobody has shown me what the demand is, what the unmet need is today or in the future, and what the pipeline size should be, which will drive the cost of this total project,” Sen. Brad Bekkedahl said.

Bekkedahl suggested that making a multi-million dollar commitment without any kind of market data backing it up is unprecedented. And that leads into another question on the minds of western lawmakers. That one aims toward fairness in some respects. But it’s also leads to important questions about the future for the West.

“What kind of contribution do we see from eastern North Dakota, Grand Forks and Fargo?” Rep. Patrick Hatlestad asked. “Those people who are going to benefit directly from the pipeline?”

Sen. Bekkedahl, following on that, pointed out that nearly a billion in state funds have already been put toward water projects in the east and other investments outside northwestern North Dakota. These are things the Senator stressed that he firmly supports, but he also sees a future in northwestern North Dakota where they someday face the same issues as coal country.

Bekkedahl said so far, the only thing northwest North Dakota has gotten in the diversification realm is the recently announced Cerilon plant.

“He doesn’t have all the tools,” Bekkedahl added. “He needs a big project site. So my point is, these resources are all going every place except here, and we have a development fund that needs funding for the projects up here.”

Department of Mineral Resources Director Lynn Helms, meanwhile, said the West will have many value-aded opportunities coming in the near future.

“I think one of the concerns about the project is what is actually going to be transported to eastern North Dakota,” Helms said. “And I want to re-emphasize that it’s residue gas, dominantly methane. You know, the ethane content will depend on what can get into Northern Border and what else we do with it.”

One of the other concerns Helms has heard from the West is about value-added energy potential.

“There are a couple of things that are absolutely critical infrastructure for value-added energy like pet-chem and those sorts of things,” Helms said. “One of those is salt caverns storage.”

A map of the areas the state’s Energy and Environmental $esearch Center is currently looking at to serve that need shows three areas all hovering over northwestern North Dakota, in or near Williams and McKenzie counties.

In fact, Helms added, the kinds of salts that have potential for salt cavern storage only exist in the West.

Another critical infrastructure element for the future is carbon storage. On a different map, Helms showed that the distribution of that geology is also heavily centered over the western part of North Dakota.

“So what we are talking about is transferring residue gas to value added-ag, and keeping the natural gas liquids in western North Dakota for value-added energy, because that is where the geology exists to make that possible,” Helms said.

North Dakota Department of Commerce Commissioner James Leiman said the recently announced Cerilon project in Trenton will be a “superhighway” to petrochemical and other developments in western North Dakota.

“(It’s) basically what could be considered one of the biggest natural gas to liquids plays that he world has seen in the last several decades,” he said. “That sounds like a big statement. But what’s important about that is the Gulf states are oversaturated in terms of gas to liquids. So Qatar, the Emirates, they’ve all made investments now in the LNG capacity. So they’re focusing their areas on that, which creates opportunities here for your synfuels, your solvents, and a number of other things.”

Leiman foresees a value-added cluster developing around Trenton’s gas to liquids plant that could lead into a wide range of value-added energy products, from fertilizer and urea to plastics, pharmaceuticals and fuels.

“Roughly 90 percent of this stuff is currently manufactured in a place that we have an unofficial Cold War with also known as People’s Republic of China,” he said. “And to me, I look at that, and as we plan for missions to Japan, Taiwan, and as the federal government sponsors repatriation of supply chain activity, I look at it from the prism of why not northwestern North Dakota? The feedstocks are gonna be there for all of these capabilities.”

Successfully leveraging all of those things will have a transformative effect and build that diversification the West is looking for, Leiman said.

“There should be no reason why you don’t have $30 billion worth of projects in Mckenzie and Williams counties here over the next several years, given the attributes we’ve talked about today,” he said. “But we do need to be strategic about how we do that. Because one thing we do have here is a lot of private sector money that’s trying to find a home.”

Leiman suggested a brainstorming session with key people in the West, to better integrate east and west needs, and crafts an action plan for 2023 that will help the region diversify. WDEA Director Geoff Simon, meanwhile, said their organization would help facilitate the conversation.